The XAU/USD pair started the week under modest selling pressure but struggled to gather bearish momentum in the absence of significant fundamental drivers. After closing flat on Monday and Tuesday, gold climbed above $1,830 on Wednesday. Nonetheless, the renewed USD strength in the second half of the week forced the pair to, once again, turn south.With the US labour market report showing impressive job gains in July, gold declined sharply and touched its lowest level in more than a month at $1,758 on Friday before steadying around $1,760.

On Monday, the data from the US showed the economic activity in the manufacturing sector continued to expand in July albeit at a softer pace than it did in June with the ISM's Manufacturing PMI declining to 59.5 from 60.6. Further details of the publication revealed that the Prices Paid component, which notched a record high of 92.1 in June, edged lower to 85.7. Nevertheless, this report was largely ignored by market participants and the USD stayed relatively calm against its major rivals.

On Wednesday, the Automatic Data Processing (ADP) Research Institute revealed that private sector employment rose by 330,000 in July. This reading missed the market expectation of 695,000 by a wide margin and triggered a USD selloff, allowing XAU/USD to rise above $1,830. However, hawkish Fed commentary during the American trading hours helped the greenback regain its strength and forced gold to erase its gains.

While speaking at an event organized by the Peterson Institute for International Economics, Fed Vice Chair Richard Clarida noted that tapering could begin later in the year. Regarding the rate outlook, Clarida said that he expects the conditions for raising interest rates to be met by the end of 2022. On a similar note, Dallas Fed President Robert Kaplan argued that the Fed should start tapering asset purchases soon and do it in a gradual way. “Reducing Fed's asset purchases soon gives it flexibility to be patient on interest rate hikes,” Kaplan added. “Faster taper does not mean the Fed will raise rates faster.”

Following these remarks, the US Dollar Index rose to its highest level in more than a week and caused gold to remain on the back foot. In the meantime, the ISM Services PMI improved to a new series-high of 64.1 in July and Initial Jobless Claims declined by 14,000 to 385,000 in the week ending July 31.

Finally, the US Bureau of Labor Statistics announced on Friday that Nonfarm Payrolls (NFP) rose by 943,000 in July, surpassing the market consensus of 870,000. Additionally, June’s print got revised higher to 938,000 from 850,000. Furthermore, the Unemployment Rate declined to 5.4% from 5.9% and the annual wage inflation rose to 4% from 3.7%. The impressive jobs report confirmed the hawkish tilt in the Fed’s policy outlook and provided a strong boost to the greenback. In turn, XAU/USD lost more than 2% in a single day.

On Tuesday, ZEW Survey results for the euro area and Germany will be featured in the European economic docket ahead of Nonfarm Productivity and Unit Labor Costs data from the US for the second quarter.

More importantly, the US Bureau of Labor Statistics will release the July Consumer Price Index (CPI) data on Wednesday. The annual CPI climbed to 5.4% in June and a similar reading in July is likely to help the USD continue to outperform its rivals.

Later in the week, the weekly Initial Jobless Claims data and the University of Michigan’s Consumer Sentiment Survey will be looked upon for fresh impetus. Additionally, investors will pay close attention to comments from Fed officials ahead of the highly-anticipated Jackson Hole Symposium. In case FOMC policymakers confirm a reduction in asset purchases toward the end of the year, the USD rally could pick up steam and vice versa. 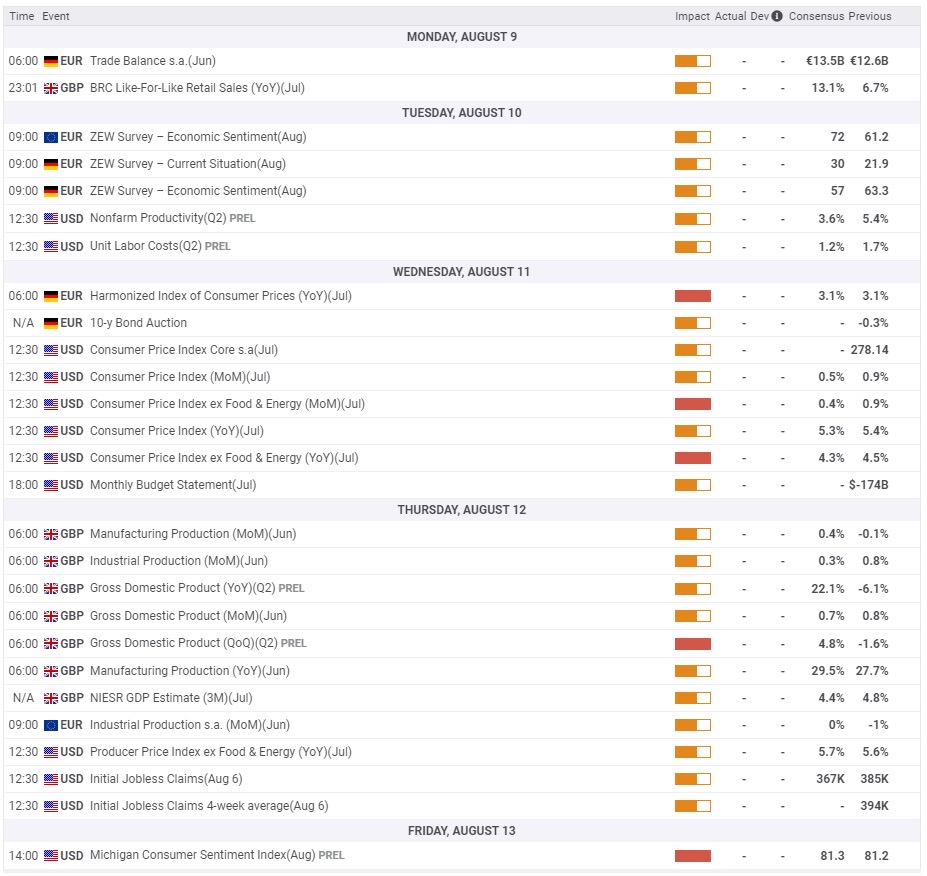 Following Friday’s drop, the Relative Strength Index (RSI) indicator on the daily chart fell below 40 for the first time in more than a month, suggesting that the bearish pressure is picking up steam. The RSI also stays slightly above 30, showing that there is more room on the downside before XAU/USD becomes technically oversold and sellers look to book their profits.

$1,760 (static level) aligns as the initial support ahead of $1,750 (June 29 low). A daily close below the latter could attract sellers and cause gold to extend its slide toward the next static level at $1,730.

Despite the bearish shift witnessed in the technical outlook, experts expect gold to stage a recovery in the near term with FXStreet Forecast Poll pointing to an average price target of $1,779 in the one week view. 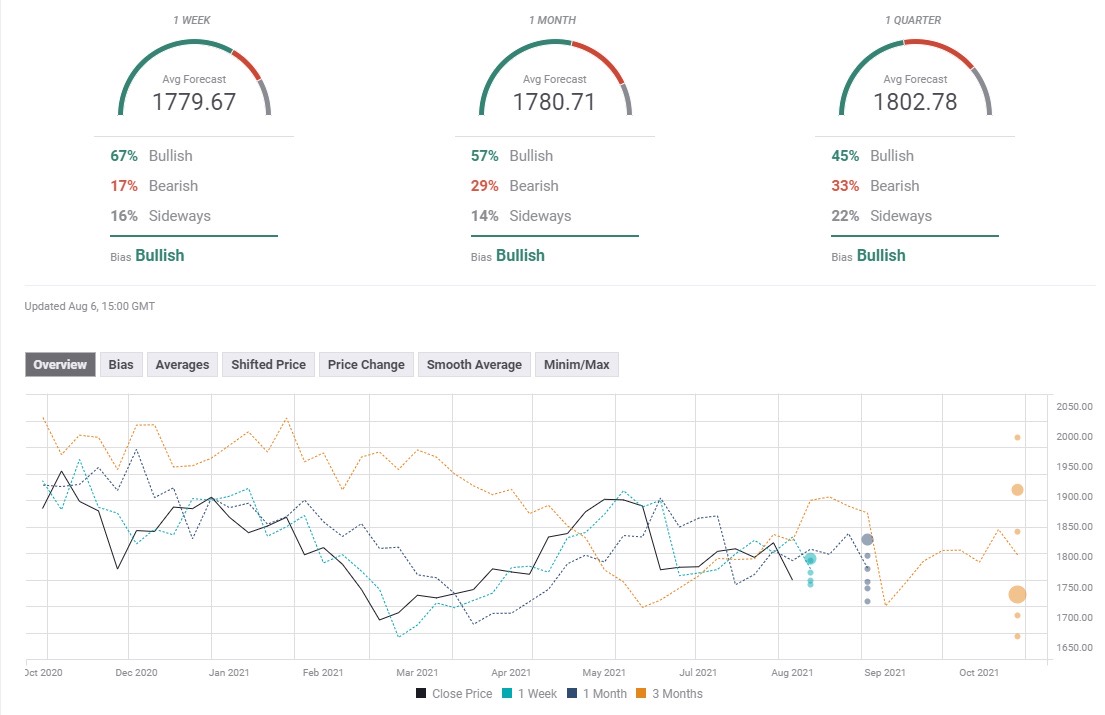