After a tarnished start to the week, gold made impressive gains, breaking above a key resistance area on Wednesday and reaching its highest level in nearly two months, near $1,850, on Thursday. From there, the yellow metal went into consolidation mode, giving back some of its weekly gains, but ended up closing the second straight week in positive territory.

The market chatter about the US Federal Reserve considering a 50 basis points rate hike in March increased in volume in the first half of the week and provided a boost to US Treasury bond yields. The benchmark 10-year US T-bond yield rose more than 5% and reached its highest level in two years at 1.9% early Wednesday.

Fed Governor Christopher Waller said that he wouldn’t favour a 50 bps hike in March, just before the Fed’s blackout period started on Saturday, January 15. Nevertheless, this comment caused investors to speculate that this was on the table as an option. Additionally, billionaire investor Bill Ackman argued that the Fed would need to go for a 50 bps hike to restore its credibility. Finally, Anna Wong, Chief US Economist for Bloomberg Economics, said that their in-house model of a Fed reaction function was suggesting that a 50 bps rate increase in March was warranted.

In the second half of the week, safe-haven flows started to dominate the financial markets and the sharp retreat witnessed in the US T-bond yields fueled a gold rally.

The ongoing conflict between Russia and Ukraine, the People’s Bank of China’s efforts to loosen their policy amid worsening economic outlook and the steep drop seen in Wall Street forced investors to seek refuge. Data published by the US Department of Labor showed on Thursday that there were 286,000 initial claims - the highest reading since October - for unemployment benefits in the US last week, further weighing on sentiment.

XAU/USD rose nearly 2% from Tuesday’s closing level and touched its strongest level since November 22 at $1,849 late Thursday. The 10-year US T-bond yield erased all of its weekly gains and returned below 1.8% on Friday.

On Wednesday, the Fed will announce its policy rate decision and release the Monetary Policy Statement following its two-day meeting.

Dovish scenario: The Fed adopts a dovish tone by suggesting that it will remain patient with regards to policy tightening. US T-bond yields could fall sharply on such a shift in the policy outlook and provide a boost to XAU/USD. FOMC Chairman Jerome Powell would need to voice renewed concerns over the labour market and the growth outlook to convince investors that they will not rush to continue to lift rates after March. According to the CME Group’s FedWath Tool, there is only a 10% probability of the Fed leaving its policy rate unchanged in March.

Hawkish scenario: Chairman Powell will definitely have to respond to questions on the possibility of a 50 bps hike in March. If Powell reveals that they have discussed such an option, US T-bond yields could surge higher and force gold to turn south. Moreover, a decision to increase the reductions in monthly asset purchases could also be assessed as a bullish development for the greenback.

The most likely scenario is that the Fed leaves its policy settings unchanged and reiterates that policymakers will continue to monitor economic developments closely. In that case, Friday’s Personal Consumption Expenditures (PCE) Price Index data, the Fed’s preferred gauge of inflation, could trigger a significant market reaction. Since November, the Fed made it clear that they will prioritize inflation control over employment and a stronger-than-expected PCE inflation reading could cause investors to start re-pricing an aggressively hawkish policy path.

Next week’s US economic docket will also feature the US Bureau of Economic Analysis’ first estimate of the fourth-quarter Gross Domestic Product (GDP) growth. The annualized GDP is expected to rise to 5.8% from 2.3% in the third quarter. Such a rebound in economic activity should help the dollar preserve its strength while the opposite could weigh on the currency even if the Fed refrains from delivering a dovish message.

Other high-tier data releases from the US will include December Durable Goods Orders, the Conference Board’s Consumer Confidence Index and IHS Markit’s preliminary January Manufacturing and Services PMI. Nevertheless, market participants are unlikely to react to these data while awaiting the Fed’s policy announcements. 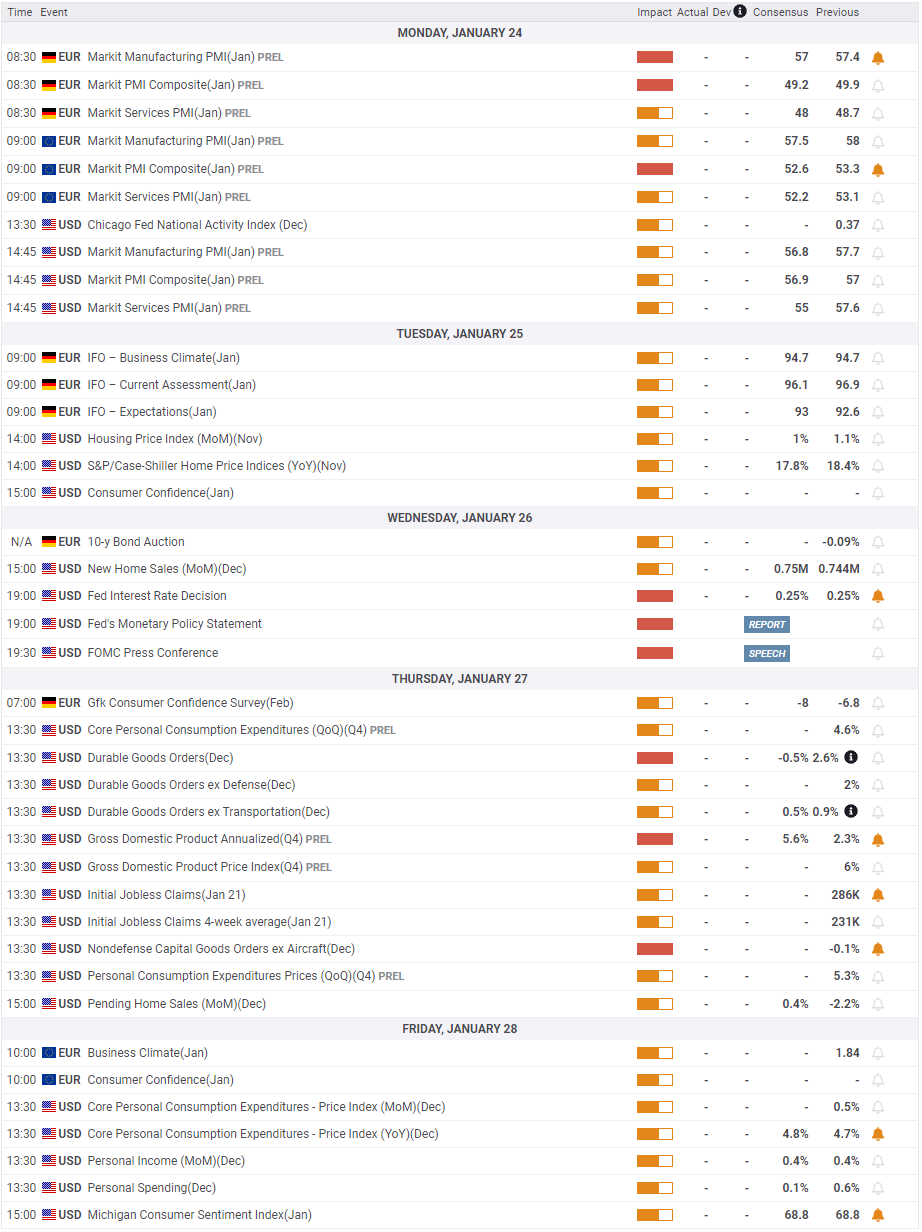 Gold fell toward the 200-day SMA earlier in the week but didn't have a difficult time holding above that level, suggesting that sellers are staying on the sidelines. A bullish bias is confirmed by the Relative Strength Index (RSI) indicator on the daily chart, which sits comfortably above 50.

Static resistance seems to have formed at $1,850. In case XAU/USD rises above that level and starts using it as support, it could target the $1,870 area. Ideally, this move would be accompanied by another leg lower in the 10-year US T-bond yield on a dovish Fed tone.

On the flip side, $1,830 (Fibonacci 23.6% retracement of the uptrend that started in October and ended in mid-November) aligns as first support. A daily close below that level could open the door for an extended correction toward $1,815 (Fibonacci 38.2% retracement). Unless the pair falls below the $1,805/$1,800 area, where the ascending trend line meets the 200-day SMA, the near-term outlook is likely to remain bullish.

Following this week's action, a bullish tilt is apparent in the FXStreet Forecast Poll. Average forecasts for one-week and one-month views stand at $1,850 and $1,870, respectively. 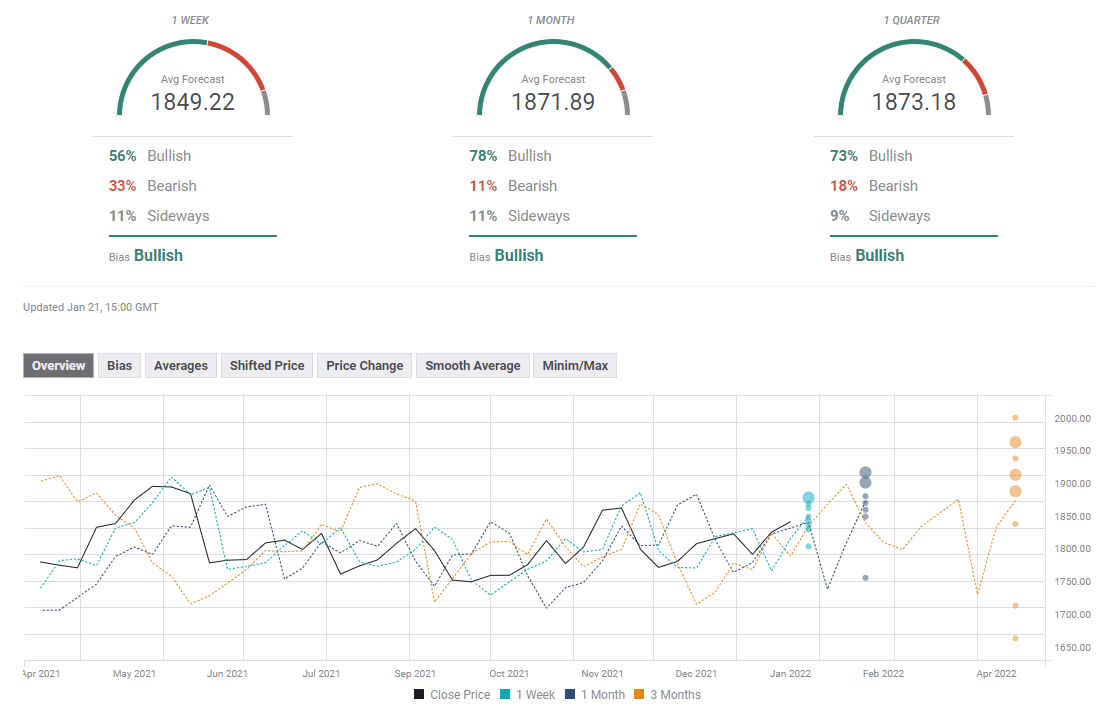