The heavy selling pressure surrounding the greenback allowed the XAU/USD pair to climb above $1,800 at the start of the week. However, the pair struggled to clear the key resistance area that seems to have formed at $1,810 mid-week as investors moved to the sidelines while waiting for FOMC Chairman Jerome Powell’s speech at the Jackson Hole Symposium.

Nevertheless, with the USD suffering heavy losses on Friday on Powell’s remarks, gold surged to its highest level since early August near $1,820 and rose more than 2% on a weekly basis.

The risk-positive market environment made it difficult for the USD to find demand on Monday and the US Dollar Index (DXY) erased the majority of the previous week’s gains by losing more than 0.5% on a daily basis. The data published by IHS Markit revealed that the business activity in the manufacturing and service sectors continued to expand at a softening pace in the first half of August.

In the absence of high-tier data releases on Tuesday, the USD stayed on the back foot but gold failed to end the day in the positive territory after meeting stiff resistance above $1,800. On Wednesday, the US Census Bureau reported Durable Goods Orders in the United States declined by 0.1%, or $0.4 billion, to $257.2 billion in July. This reading came in better than the market expectation for a decrease of 0.3%. Nevertheless, investors showed little to no reaction to this report and rising US Treasury bond yields helped the greenback show some resilience against its major rivals.

On Thursday, the US Bureau of Economic Analysis (BEA) announced that it revised the annualized real GDP growth in the second quarter to 6.6% from 6.5%. Moreover, the US Department of Labor said the Initial Jobless Claims increased by 4,000 to 353,000 in the week ending August 20. Although these data were largely ignored by market participants, hawkish Fed commentary provided a modest boost to the USD.

Dallas Fed President Robert Kaplan said September could be a good time to announce the plan for tapering. Similarly, Kansas City Fed President Esther George noted that the current outlook suggests that the Fed could start adjusting purchases this year. Additionally, St. Louis Fed President James Bullard told CNBC that he would want asset tapering to be completed by the first quarter of 2022.

On Friday, Powell refrained from delivering fresh hints regarding the timing of asset tapering and caused the USD to weaken against its rivals. Although Powell acknowledged that he was in favour of adjusting the asset purchases before the end of the year at the July policy meeting, he added the Delta variant has spread further since then. "We will be carefully assessing incoming data and the evolving risks," Powell said. "Timing and pace of taper will not be intended to carry a direct signal regarding the timing of interest rate liftoff." Reflecting the negative impact of these comments on the USD, the DXY lost nearly 0.5% on a daily basis.

The economic docket will be relatively eventless with regards to high-tier macroeconomic data releases at the start of the week.

On Wednesday, the Automatic Data Processing (ADP) Research Institute will publish the private sector employment data for August. Additionally, the ISM Manufacturing PMI will be looked upon for fresh impetus. Investors are likely to pay close attention to the Prices Paid component to see if input price pressures remain high in the manufacturing sector.

The weekly Initial Jobless Claims and July Factory Orders will be featured in the US economic docket on Thursday ahead of Friday’s August jobs report. The market consensus points to an increase of 763,000 in Nonfarm Payrolls (NFP) following July’s impressive print of 943,000. A disappointing NFP print could confirm a delay in asset tapering and allow XAU/USD to push higher. On the other hand, a positive surprise could help the USD regain its strength and drag gold lower. The ISM Services PMI report will also be published on Friday but that data shouldn’t be able to trigger a noticeable market reaction following the labour market report. 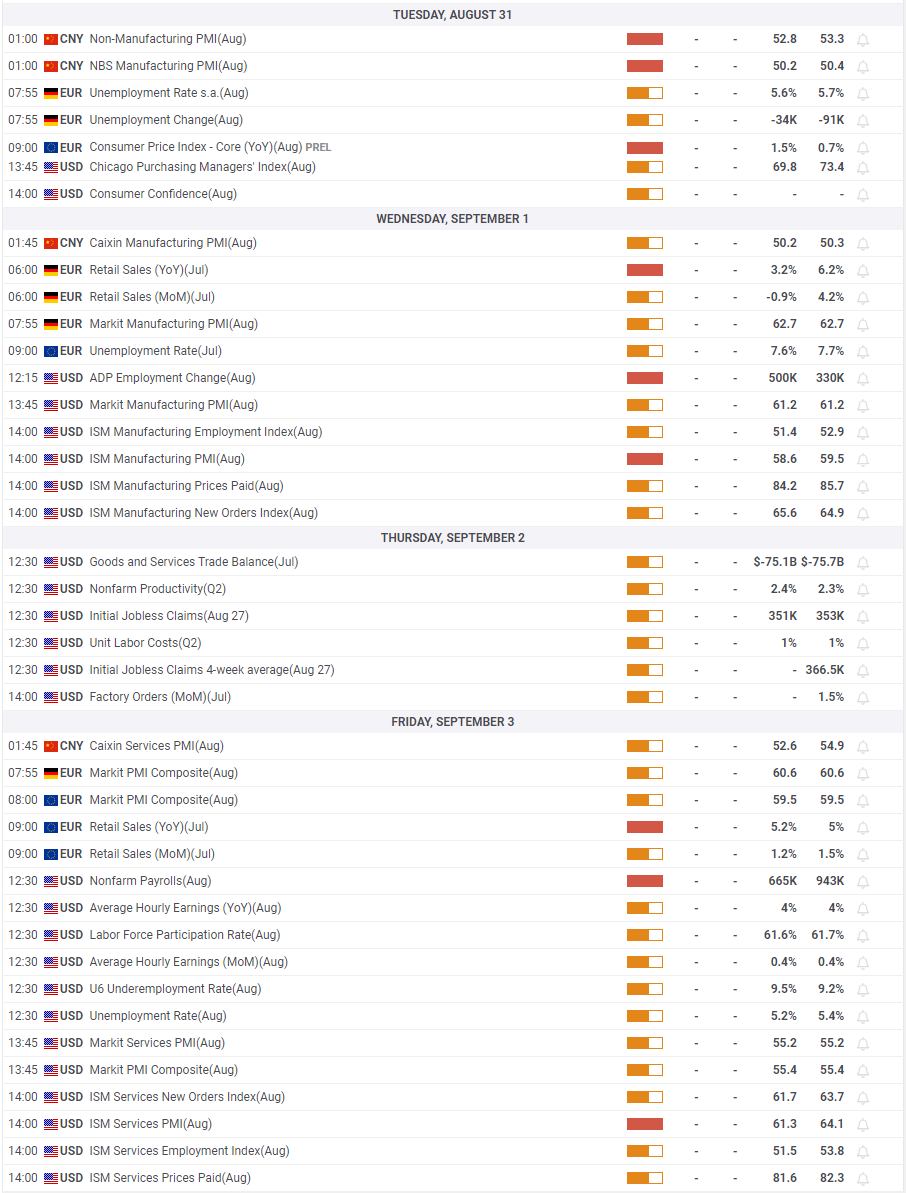 Following Friday's decisive upsurge, the Relative Strength Index (RSI) indicator on the daily chart climbed to 60, suggesting that there is more room on the upside before the pair becomes technically overbought. The initial hurdle is located at $1,830 (static level) ahead of $1,845 (static level).