After closing the previous week below the 200-day SMA, gold started the new week on the back foot and registered modest losses on Monday and Tuesday. Following a rebound on Wednesday, XAU/USD lost its traction and ended up closing the second straight week in negative territory. Nevertheless, gold volatility remained relatively low as investors tried to figure out whether or not major central banks will continue to tighten their policies amid worrying signs of a slowdown in activity.

Gold came under modest bearish pressure on Tuesday as the benchmark 10-year US Treasury bond yield edged higher with American traders returning from a three-day weekend. In the absence of high-tier macroeconomic data releases, however, the yellow metal’s losses remained limited.

While testifying before the Senate Banking, Housing, & Urban Affairs Committee on Wednesday, FOMC Chairman Jerome Powell reiterated that ongoing rate increases will be appropriate. When asked about the possibility of a 100 basis points (bps) rate hike, Powell said he would not take any specific size of a rate hike "off the table." Regarding the growth outlook, Powell acknowledged that rate increases could cause a recession. The 10-year US T-bond yield turned south during Powell’s testimony and allowed XAU/USD to snap a three-day losing streak.

On Thursday, the data published by the S&P Global revealed that the economic activity in the US private sector grew at a much softer pace than expected in early June, with the Composite PMI falling to 51.2 from 53.6. Commenting on the data, “the pace of US economic growth has slowed sharply in June, with deteriorating forward-looking indicators setting the scene for an economic contraction in the third quarter,” noted Chris Williamson, Chief Business Economist at S&P Global Market Intelligence. Although the initial reaction to the PMI report triggered a dollar selloff, investors stayed reluctant to bet on a change in the Fed’s policy outlook.

In fact, the CME Group FedWatch Tool shows that markets have nearly fully priced in a total of 125 basis points of Fed rate hikes at the next two policy meetings. Additionally, Powell said that they have an unconditional commitment to fighting inflation on the second day of his semiannual testimony.

Ahead of the weekend, the University of Michigan announced that it revised the 5-year inflation expectations in its Consumer Sentiment Survey to 3.1% from the flash estimate of 3.3%. Also, the US Census Bureau reported that New Home Sales rose by 10.7% in May to 696,000 following April's contraction of 12%. The dollar lost interest after these data and allowed gold to end the week above $1,820.

The US economic docket will feature Durable Goods Orders data for May. Investors expect a 0.6% increase in May and a weaker-than-forecast print could revive recession fears and weigh on the dollar. On Tuesday, the Conference Board’s (CB) Consumer Confidence Index will be watched closely by market participants. Fed policymakers explained that the sharp increase witnessed in the inflation expectations component of the University of Michigan’s Consumer Confidence survey was the primary reason behind the Fed’s decision to hike the policy rate by 75 bps in June. In case the CB’s publication reveals that inflation is having a significant negative impact on consumers’ spending outlook, the dollar could gather strength and cause XAU/USD to turn south.

On Wednesday, European Central Bank (ECB) President Christine Lagarde, Bank of England (BOE) Governor Andrew Bailey and FOMC Chairman Jerome Powell will speak at a panel at the ECB’s annual Forum on Central Banking. In case investors are reminded of the widening policy divergence between the Fed and the ECB and the BOE during that event, gold could have a hard time finding demand.

The US Bureau of Economic Analysis will release the Personal Consumption Expenditure Price Index, the Fed’s preferred gauge of inflation, data on Thursday. Investors forecast the Core PCE to stay unchanged at 4.9% on a yearly basis in May. Even if the PCE inflation data were to come in weaker than expected, it would be surprising to see a significant market reaction, especially after the Consumer Price Index printed a new four-decade high in the same period.

Finally, the ISM Manufacturing PMI will be the last data release of the week on Friday.

In the current market environment, however, investors are likely to refrain from committing to large positions. The market positioning suggests that the 10-year US T-bond yield and the US Dollar Index don’t have much room on the upside. For gold to go into a steady uptrend, however, a significant decline in US yields might be required and next week’s events are unlikely to trigger such a reaction. 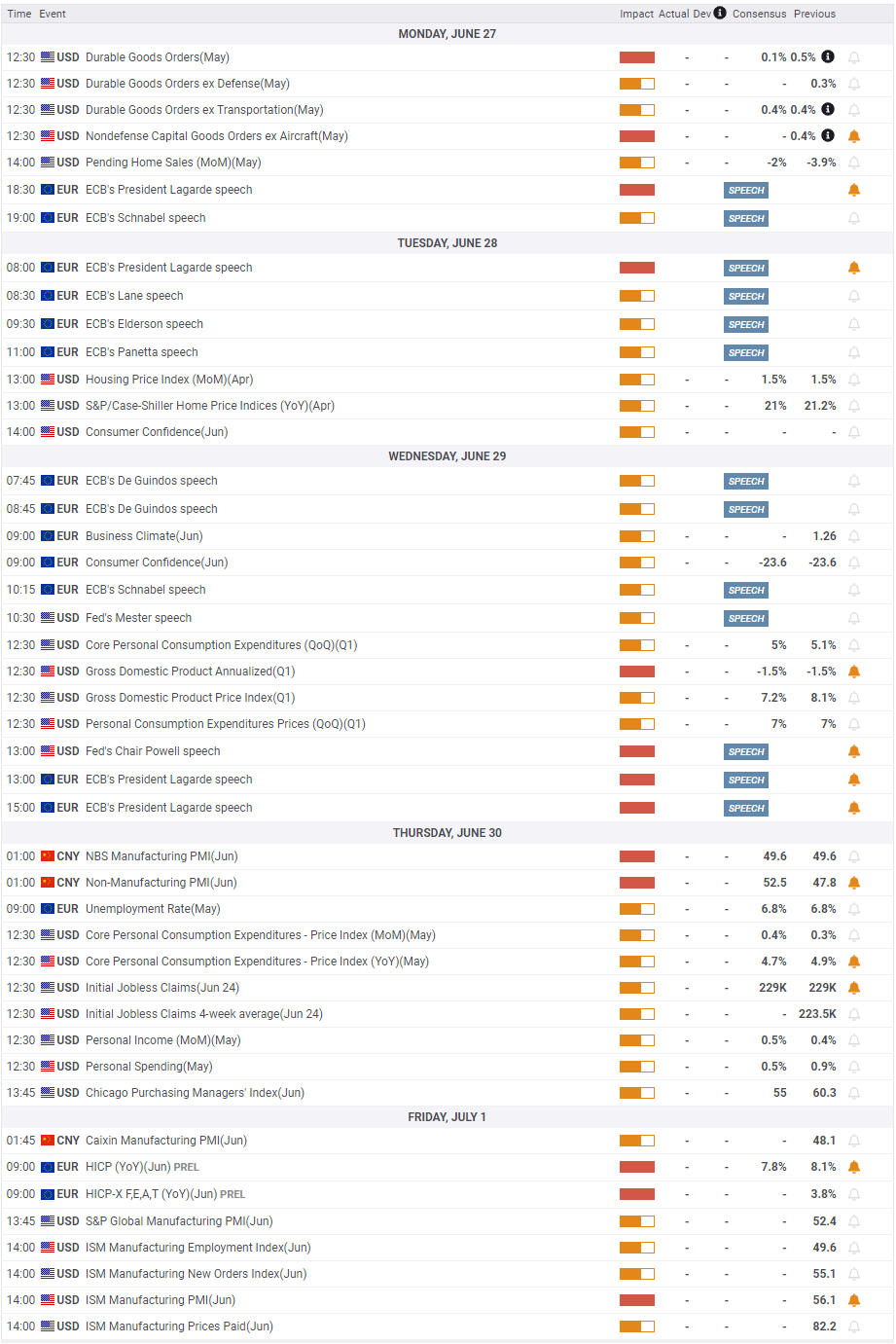 The Relative Strength Index (RSI) indicator on the daily chart stays below 50, showing that buyers are struggling to dominate gold's price action. On the upside, the Fibonacci 23.6% retracement level of the latest downtrend and the 200-day SMA form strong resistance at $1,850. Unless XAU/USD makes a daily close above that level, sellers should be able to retain control. Above $1,850, $1,860 (50-day SMA) and $1,870 (Fibonacci 38.2% retracement) aligns as the next hurdles.

The FXStreet Forecast Poll points to a slightly bearish bias in the near term, but none of the polled experts expects gold to fall below $1,800 next week. The one-month outlook is overwhelmingly bullish with the average target sitting above $1,870.