Spot gold continues to spiral lower on Tuesday, falling to the lowest in four months, pressured by strong risk appetite on vaccine hopes and signs of eventual start of transition in the White House.
Bears broke below first key support at $1850 (Sep/Nov base) on Monday and took out double-Fibo support at $1836/32 (Fibo 38.2% of $1451/$2074 / Fibo 23.6% of $1046/$2074), to crack psychological support at $1800, reinforced by rising 200DMA, on Tuesday.
Break of these supports generated strong bearish signal, which would be boosted by clear break of $1800.
Pullback from record high at $2074, commences its second leg after break of two-month consolidation, signaling deeper correction of five-year uptrend from $1046, which failed to sustain gains above psychological $2000 barrier.
Two massive bearish daily candles (Mon/Tue) weigh heavily, with daily chart showing strengthening negative momentum and supporting bears along with fundamentals, being strongly against the yellow metal.
Caution on oversold stochastic and RSI that may produce headwinds and pause bears for consolidation.
Selling upticks under broken $1850 support, now reverted to strong resistance, remains favored, with loss of $1800 handle to risk drop to $1763 (50% of $1451/$2074 / monthly Tenkan-sen). 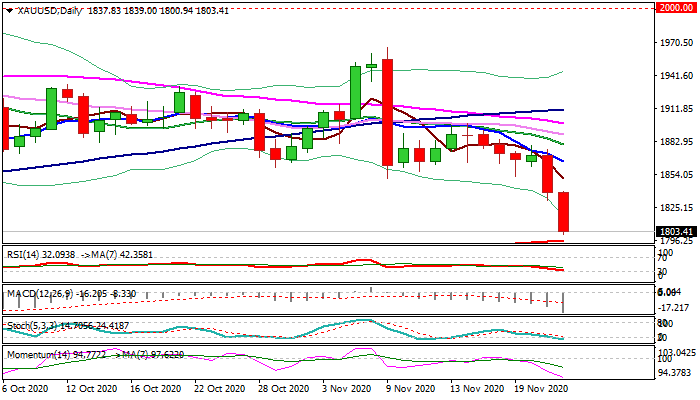