Gold price stayed relatively calm below $1,700 on Monday but rose decisively after piercing through that level on Tuesday. With US Treasury bond yields falling sharply on Thursday and putting pressure on the US Dollar, XAUUSD extended its rally and reached its highest level since August above $1,760. In the absence of high-impact macroeconomic data releases next week, the risk perception is likely to continue to impact the US Dollar's valuation and Gold price's action.

The disappointing trade data from China, which revealed that the country’s trade surplus widened at a softer pace than expected in October, caused markets to start the week on a cautious note. Additionally, Chinese officials rejected reports claiming that China was planning to ease Covid-related restrictions. These developments didn’t allow Gold price to build on Friday’s gains but the positive shift witnessed in risk sentiment helped it limit its losses.

Wall Street’s main indexes gained traction late Monday as investors started to price in a Republican victory in the United States (US) Midterm Elections and the US Dollar (USD) struggled to find demand. Although the outcome of the election is likely to be finalized in early December following a runoff election in Georgia, Republicans remain on track to gain the majority in the House.

With risk flows dominating the financial markets on Tuesday, Gold price climbed above $1,700 and managed to stabilize there. Markets stayed quiet on Wednesday as investors refrained from making large bets ahead of the highly-anticipated Consumer Price Index (CPI) data from the US.

On Thursday, the US Bureau of Labor Statistics reported that annual CPI in the US declined to 7.7% in October from 8.2% in September. Moreover, the Core CPI, which excludes volatile energy and food prices, declined to 6.3% from 6.6%. Both of these readings came in below market expectations and caused the US Dollar to come under heavy selling pressure. The US Dollar Index lost more than 2% on the day and XAUUSD advanced above $1,750 for the first time in nearly three months. In the meantime, market participants scaled back bets on one more 75 basis points (bps) Federal Reserve (Fed) rate hike in December and triggered a sharp decline in the US Treasury bond yields. According to the CME Group FedWatch Tool, the probability of a 50 bps Fed rate increase in December currently stands at 80%, compared to 50% before the inflation report.

During the Asian trading hours on Friday, China’s National Health Commission (NHC) announced that they have decided to shorten the required quarantine for travelers and people who had close contact with confirmed Covid cases by two days. The NHC also noted that they will stop tracing secondary contacts of Covid cases. Renewed optimism about China moving away from its zero-Covid policy provided an extra boost to risk-sensitive assets and further weighed on the safe-haven US Dollar. In turn, Gold price continued to push higher and rose above $1,760 on Friday.

October Industrial Production and Retail Sales figures from China will be released on Tuesday. Investors, however, are likely to ignore these data and stay focused on developments surrounding the Covid restrictions. In case China continues to ease its rules, Gold price should stretch higher on improving demand outlook.

On Wednesday, the US Census Bureau will publish the October Retail Sales data, which is expected to show an expansion of 0.8%. Since sales are not adjusted for price changes, they are unlikely to trigger a noticeable market reaction.

The Federal Reserve Bank of Philadelphia’s Manufacturing Survey and the US Department of Labor’s weekly Initial Jobless Claims data will be the last data of the week from the US on Thursday.

Since the above-mentioned data releases don’t have the potential to move the markets in a significant way, participants will keep a close eye on Fedspeak and the overall risk perception. In case global equity indexes preserve the bullish momentum next week, XAUUSD could capitalize on the broad US Dollar weakness.

Following the soft October inflation report, Dallas Federal Reserve President Lorie Logan and San Francisco Fed President Mary Daly both noted that it was appropriate to slow the pace of rate increases. Similarly, Kansas City Federal Reserve President Esther George said that she will support a “more measured” approach to rate hikes. The market positioning suggests that there is more room on the downside for the US Dollar with the odds of a 75 bps rate hike in December still holding around 20%. 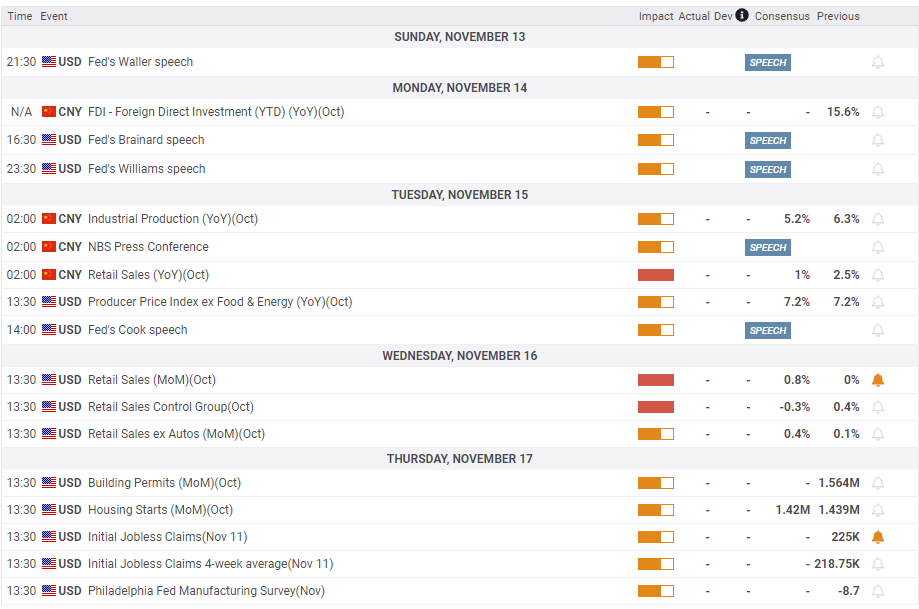 The Relative Strength Index (RSI) indicator on the daily chart is about to rise into the overbought territory above 70 for the first time in March. Although this technical development suggests that XAUUSD could stage a technical correction, the near-term outlook remains bullish with Gold price closing well above the 100-day Simple Moving Average (SMA) and the Fibonacci 23.6% retracement of the long-term downtrend.

On the downside, $1,720 (100-day SMA, Fibonacci 23.6% retracement) aligns as significant support. Only a daily close below that level could be seen as a significant bearish development and open the door for further losses toward $1,700 (psychological level) and $1,675 (50-day SMA).

The FXStreet Forecast poll points to a neutral/bullish bias in the short term with the one-week average target sitting at $1,768. The one-month outlook paints a mixed picture but the one-quarter outlook stays overwhelmingly bullish with a target of $1,801. 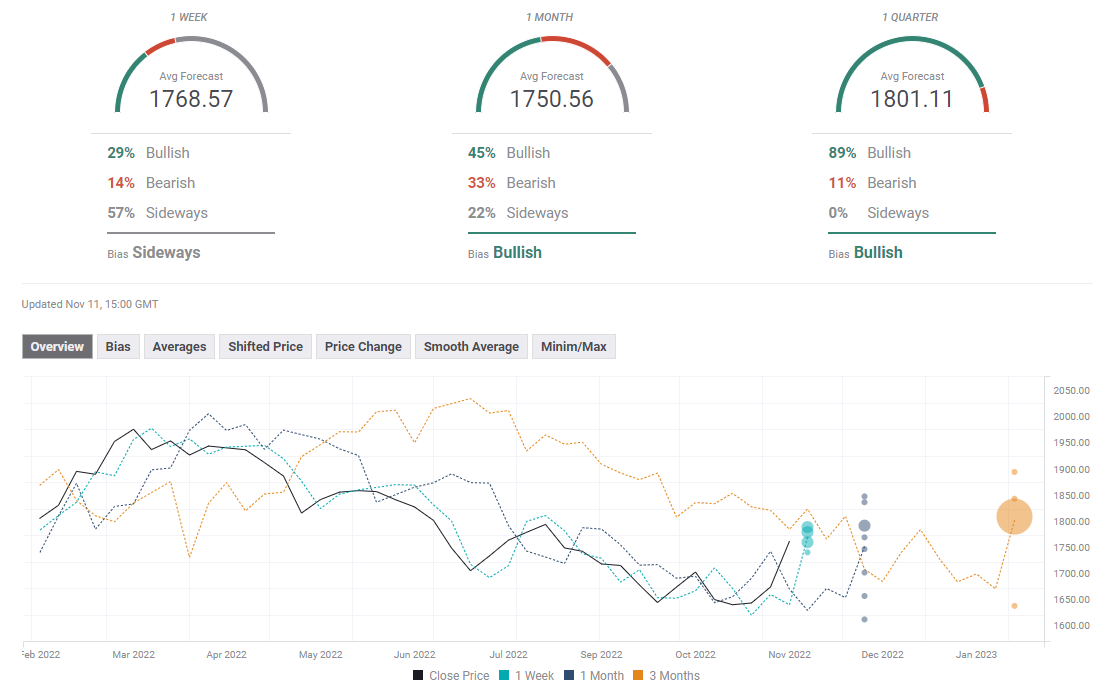