Gold price started the new week under modest bearish pressure but managed to regain its traction before staging a downward correction toward the end of the week. XAUUSD ended up closing the week little changed above $1,750. The minutes of the Federal Reserve’s October policy meeting and PMI surveys next week could impact the US Dollar’s (USD) valuation and influence the pair’s action.

The US Dollar regrouped: Over the weekend, Federal Reserve Governor Christopher Waller said that markets were "way out in front" and added rates will not fall until there is "clear, strong" evidence inflation is falling. Similarly,  San Francisco Fed President Mary Daly advised that markets should stop thinking about the pace of rate hikes and start thinking about the level. These comments caused the risk rally to lose steam and helped the USD to stay resilient against its rivals, limiting XAUUSD’s upside on Monday.

On Tuesday, the data from China showed that Industrial Production fell short of the market expectation for an expansion of 5.2% by coming out at 5.0%. Additionally, Retail Sales contracted by 0.5% in the same period following September's growth of 2.5%. With investors cheering China’s decision to relax coronavirus-related restrictions, however, these data failed to alter the market mood and global equity indexes registered strong gains, whilst Gold peaked. Meanwhile, the data published by the US Bureau of Labor Statistics revealed that the Producer Price Index (PPI) declined to 8% on a yearly basis in October from 8.4% in September. This reading came in below the market expectation of 8.3% and weighed on the USD, lifting Gold price above $1,780 for the first time since mid-August. In the late American session, escalating geopolitical tensions forced investors to adopt a cautious stance and the US Dollar started to gather strength as a safe haven.

In the early trading hours of the Asian session on Wednesday, news of two Russian-made missiles hitting Poland, near the Ukraine border, triggered a flight to safety and Gold price started to push lower. With reports later suggesting that missiles that hit Poland may have been fired by Ukrainian forces to counter other incoming Russian missiles, tensions started to ease and USD struggled to preserve its strength, allowing XAUUSD to find support.

On Thursday, the US Census Bureau reported that Housing Starts and Building Permits declined by 4.2% and 2.4%, respectively in October. These figures reminded investors of the negative impact of rising rates on the housing market and made it difficult for the USD to extend its rebound. Nevertheless, Gold price closed the day in negative territory, pressured by the 2% increase seen in the benchmark 10-year Treasury bond yield.

In the absence of high-impact macroeconomic data releases, markets stayed relatively quiet on the last trading day of the week and XAUUSD fluctuated in a narrow channel at around $1,760.

Stock and bond markets in the US will be closed on Thursday, November 24, and will close early on Friday in observance of the Thanksgiving holiday.

All the important US data will be released on Wednesday next week and it will not be easy for investors to navigate through them. S&P Global will publish the preliminary Manufacturing and Services PMI surveys for November. In October, the Services PMI declined to 47.8 from 49.3 in September and showed that the business activity in the service sector continued to contract at an accelerating pace. In case the Services PMI falls further in early November, the US Dollar could struggle to find demand and allow XAUUSD to stretch higher. Later in the day, the US Federal Reserve (Fed) will publish the minutes of the October policy meeting.

In its latest policy statement, the Fed said that policymakers will take “cumulative tightening, policy lags, and economic and financial developments” into account when determining the pace of rate hikes. This comment created expectations for a less-aggressive Fed policy tightening moving forward but FOMC Chairman Jerome Powell noted that they are focused on reaching the terminal rate and added that he expected it to be revised higher in December’s dot plot.

Nevertheless, the softer-than-expected CPI figures for October triggered a risk rally and the CME Group’s FedWatch Tool shows that markets are pricing in an 80% probability of a 50 basis points Fed rate hike in December. The market positioning suggests that the USD could continue to weaken until a 50 bps rate hike is fully priced in. If the Fed’s publication next week confirms policymakers’ intention to opt for a smaller rate increase in the last policy meeting of the year, XAUUSD could gain traction.

In the meantime, market participants will pay close attention to developments surrounding China’s zero Covid policy, given the country is a major consumer of the yellow metal. On Friday, China reported 25,129 new infections, up from 23,132 on Thursday and Beijing’s biggest district, Chaoyang, advised people to stay home this weekend. If China decides to re-introduce strict measures next week, Gold price is likely to turn south. 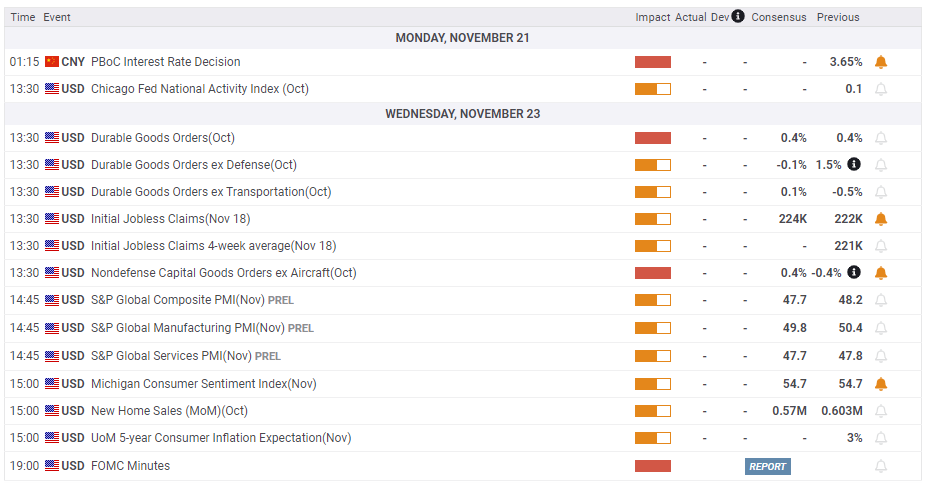 The Relative Strength Index (RSI) indicator on the daily chart retreated modestly after having climbed above 70 earlier in the week, suggesting that the latest decline is a technical correction rather than the beginning of a bearish trend. Additionally, Gold price holds comfortably above the 100-period Simple Moving Average (SMA).

On the upside, $1,780 (Fibonacci 38.2% retracement of the March-November downtrend) aligns as initial resistance. With a daily close above that level, XAUUSD is likely to face strong resistance at $1,800 (200-day SMA) before targeting $1,830 (Fibonacci 50% retracement).

Interim support seems to have formed at $1,750. In case XAUUSD falls below that level and starts using that level as resistance, it could extend its downward correction toward $1,720 (100-day SMA, Fibonacci 23.6% retracement) and $1,700 (psychological level, 20-day SMA).

FXStreet Forecast poll paints a mixed picture for XAUUSD in the short term and the one-week average target sitting at $1,731. The one-quarter outlook remains overwhelmingly bullish with an average target of $1,770. 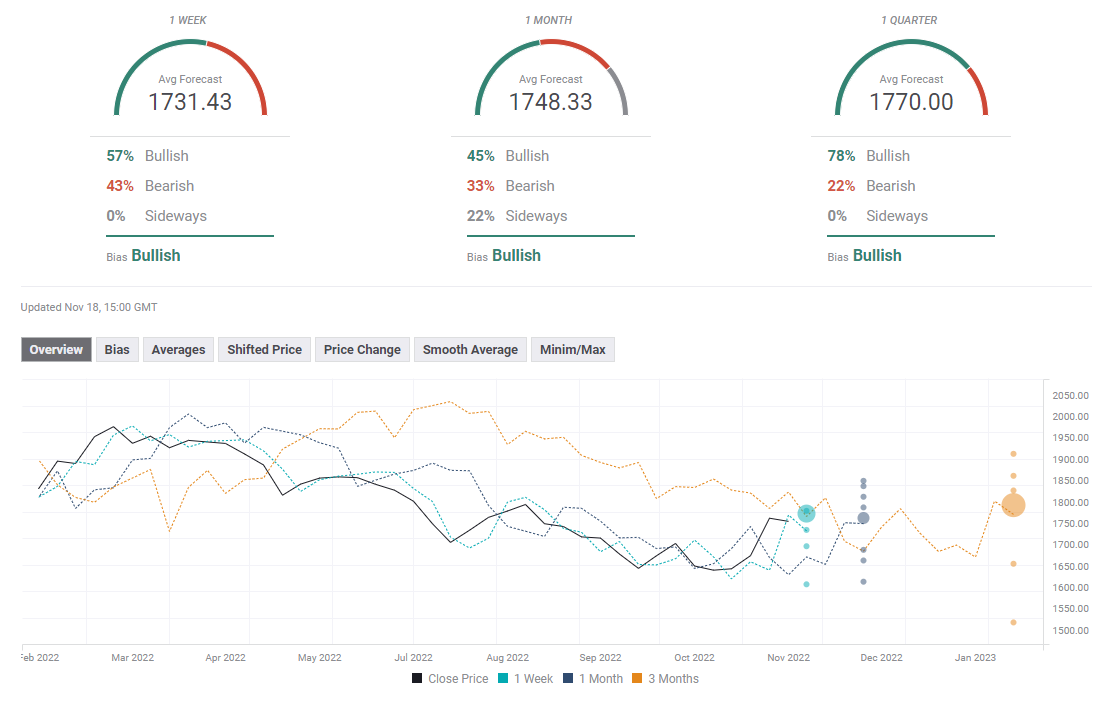