German’s economy is in trouble, which means that the Union is in trouble. The country was unable to grow in the last quarter of 2019, while the EU’s GDP posted a modest 0.1% gain, its slowest advance since 2012.

Weaker industrial output was the driving force. German’s Industrial Production fell 3.5% MoM in December and by 6.8% when compared to a year earlier. For the EU, then figures were -2.1% and -4.1% respectively.

Manufacturers were a bit optimistic over the last few months as easing trade tensions between the US and China after signing phase one of the trade deal, took off some of the persistent uncertainty. Such optimism, however, is reverting after a new uncertainty factor, the Chinese coronavirus outbreak, as worrisome as the trade war.

There was no central bank leader that didn’t express concerns about the effects of the outbreak in local and global economic growth, and that’s a lot to say. I may be too early to assess the impact, but there are no doubts the hit will come.

With that in mind, seems confidence, either within business or consumers, is set to remain depressed. This Tuesday, Germany will release its February ZEW survey, and Economic Sentiment for the country is seen contracting to 21.4 from 26.7 previous. The assessment of the current situation is also seen worsening, to -10.3 from .9.5. For the EU, Economic Sentiment, however, is seen bouncing to 30 from 25.6. Considering that the large slump in Industrial Production, driven not only by Germany but also by France and Italy, this last seems too optimistic.

Despite being extremely oversold, the EUR/USD pair seems unable to recover, not even correct higher, depressed at multi-year lows. The pair is trading lower in range, although holding above Friday’s low at 1.0826, the immediate support, ahead of 1.0770. If the pair breaks below this last, there’s little in the way toward 1.0720.

Given the extreme oversold conditions, an improvement in economic sentiment could trigger an upward corrective movement, with resistances at 1.0850 and 1.0895. Beyond this last, the pair could extend its recovery to the 1.0940/60 price zone. Sellers will likely take their chances at higher levels, and intraday gains will probably be short-lived. 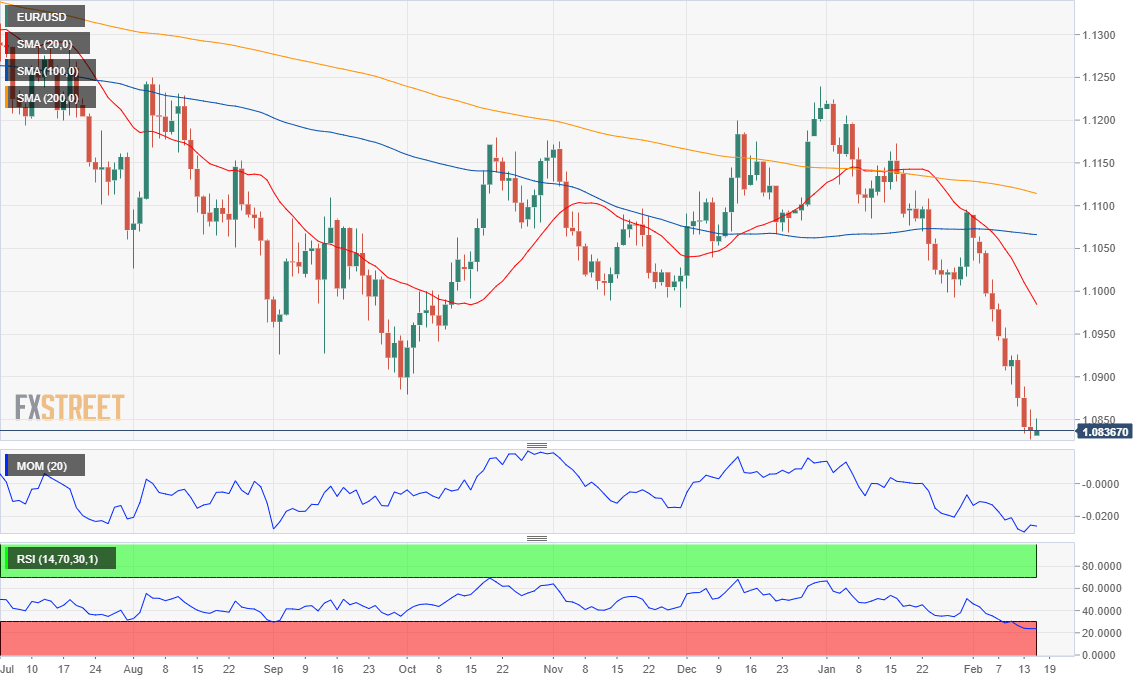 The AUD/USD pair is trading at fresh weekly lows in the 0.7130 price zone, as the dollar accelerated its advance ahead of Wall Street’s close. Australian Q2 wages’ growth coming up next.