The German ZEW Survey, which measures sentiment among business in both, Germany and the Eurozone, is expected to have bounced in April, after collapsing in March to record lows.

Sentiment smashed by the pandemic

Back in March, the Indicator of Economic Sentiment for Germany plunged to minus 49.5 points, the largest drop since the survey was started in December 1991. The slump was equally dramatic for the EU, as the index decreased in the month 59.9 points to also print 49.5. The index that measures the assessment of the current situation in Germany came in at -43.1, adding to the gloom picture.

As the official report states, the slump “was to be expected,” as the economy is “on red alert.” The coronavirus pandemic has put a halt to worldwide activity, something hardly imaginable two months ago. And while the crisis is far from over, Germany is among those countries looking for a way to re-open business.

German Chancellor Angela Merkel announced last week key steps to relax the lockdown, although such measures are quite conservative, and the lockdown will persist at least until May 4.

That said, a bounce in the indexes is expected, although holding near record lows. The Economic Sentiment is expected at -43 in Germany, and at -38.2 for the whole Union. The assessment of the current situation in the EU largest economy is foreseen at -30 from -43.1 previously.

Even in the case of upbeat readings, it’s highly unlikely that business confidence will turn positive at this stage. Speculative interest has no reasons to buy the shared currency, as not only the economy is under pressure, but the Union is unable to find common ground to deal with it.

The market, however, won’t be comfortable with below-forecast readings. Despite the FX board is all about the dollar’s demand, the EUR could be affected by a dismal sentiment report, regardless of how speculative interest is positioned on the greenback.

The EUR/USD pair has been trading below the critical 1.1000 figure since late March, yet meeting buyers on attempts to breach the 1.0800 threshold to the downside. Whatever the outcome of the report, those levels are expected to hold, although a large deviation could put the pair closer to one of those extremes. Then, it will be the turn of the greenback to determine whether or not the pair could be able to break it.

Technically, the pair is bearish, as, in the daily chart, it continues to develop below all of its moving averages, with the 20 DMA providing resistance at around 1.0930. Technical indicators lack directional strength, but hold within negative levels, a sign that bulls are nowhere to be found. 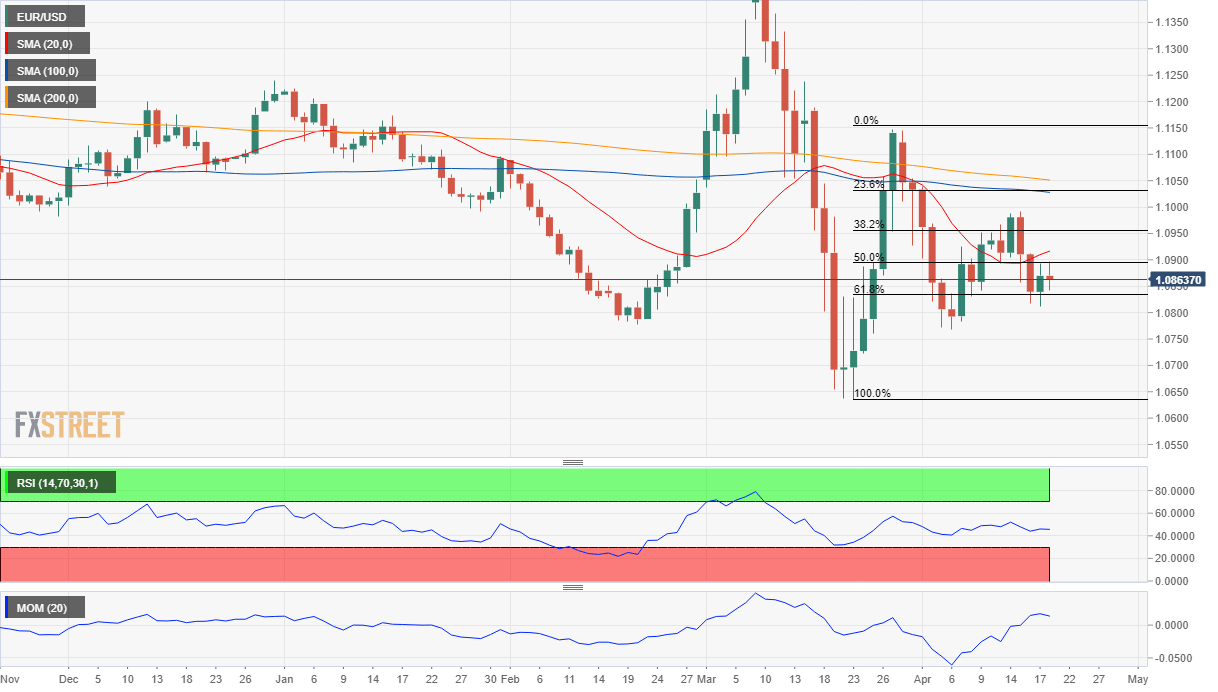 EUR/USD advances after US PCE inflation

EUR/USD pressures weekly highs as US core PCE inflation jumped to 3.4% YoY in May, as expected. High yielding assets accelerate their advances to the detriment of the greenback, as government bond yields hold steady.

GBP/USD remains depressed around 1.3900, pressured by the dovish BOE's surprise offsetting the renewed weakness in the US dollar. Worsening market mood amid Delta covid strain concerns weigh on the pound

Gold is picking up the bid tone in European trading, taking advantage of the retreat in the US Treasury yield and the dollar across the curve.

SafeMoon price has underperformed relative to top altcoins but is preparing for a move higher. A retest of the range low at $0.00000257 seems likely before SAFEMOON catapults.