EGBs have rallied with Treasuries and with Eurozone spreads coming in after the ECB confirmed that it will drop issuer limits in its EUR 750 bln QE program. Tapping the ESM and finally using Draghi’s OMT program are also on the cards for the Eurozone as governments try to limit the impact of the pandemic. Despite the massive US stimulus package and additional promises from European officials, stocks markets headed south in Europe and US futures are also broadly lower, ahead of likely dismal US jobless claims.

FX market volatility has been on the decline this week, as massive global stimulus has ratcheted markets away from panic mode that prevailed last week. However the market will continue to remain subject to high volatility and overall underperformance as long as the coronavirus contagion remains in a state of increasing spread.

The plethora of global monetary and fiscal responses have helped stocks finding a sustainable reprieve, however so far today as volatility remains high we have seen pullbacks. Whether these are corrections or signs of reversal, no one knows yet!

In the EU, GER30 in contrast with UK100, has gain some ground, having a distance of more than 1600 points from 7-years lows. This reflects to more than 35% reversal, but does it look sufficient enough in order to believe in a reversal? Technically responding, the sentiment that we have seen that last few sessions presents positive bias in the short term, with the asset holding bottom above 9,500 (23.6% Fib. level at 9,523) despite the doji Wednesday. This provides relief, that 38.2% Fib is still on the cards. A breakout above the short term pennant formation could open the doors towards a retest of 38.2% Fib. retracement level at 10,358 (this could fill March 12 gap) .

In the medium term meanwhile, daily momentum remain negative even though they are giving signs if weakness. RSI recovered from oversold levels but remains below neutral zone and MACD is at the negative are however it is extending above its signal line suggesting decreasing negative bias.

There is clearly plenty of volatility still to play out, but the way this move is shaping, weakness is now being bought into. 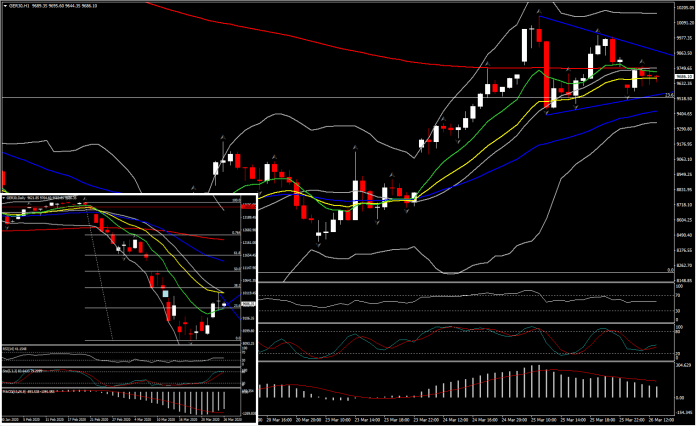