Bulls were finally rescued, as GBP/USD stalled its four-week downtrend and rebounded firmly from two-year lows of 1.2155 reached a week ago. A temporary bottom seemed in place, with the 400+ pips recovery, as the US dollar embarked on an overdue correction. The currency pair then flirted with the 1.2500 threshold ahead of BOE Governor Andrew Bailey’s appearance and critical US data.

GBP/USD breathes a sigh of relief

GBP/USD turned positive on the week for the first time in over a month, breathing a sigh of relief, as the recovery rally from the lowest level since May 2020 continued throughout the week.

On Monday, Bailey claimed that policymakers have been left helpless in the face of surging inflation during his testimony before the Treasury Select Committee (TSC) on the Monetary Policy Report (MPR). The pound stood resilient, keeping its recovery mode intact.

The strong UK labor market report published on Tuesday aided the renewed upside in the pair.  The UK ILO Unemployment Rate fell to 3.7% in the first three months of this year, its lowest since 1974. Meanwhile, the Average Earnings Including Bonus increased by 7% YoY in March vs. 5.4% expected.

The turnaround in cable, however, could be mainly associated with the overdue correction in the US dollar from two-decade highs. Growth and inflation fears dominated all week, in the face of China’s zero-COVID policy, an aggressive tightening outlook by major global central banks and the ongoing Ukraine crisis.

Even with the hawkish Fed commentary and firmer US Treasury yields, the dollar failed to capitalize and instead extended its corrective pullback, sending GBP/USD higher to test the 1.2500 threshold mid-week.

GBP sellers, however, returned after British consumer price inflation hit 9% in April – surpassing the peaks of the early 1990s recession while missing the estimates of 9.1%. The pound tumbled amid a dovish shift in BOE rate expectations following the below-forecast UK CPI. The probability of a 50 bps June hike halved to 19% from 38% at Tuesday's close, per a Refinitiv measure based on UK interest rate futures.

The setback was temporary, as bulls jumped back into the game, with attention shifting back towards dollar dynamics and broader market sentiment. The greenback resumed its retreat after the weekly US jobless claims and regional manufacturing index disappointed, adding to economic concerns.

Friday’s upside surprise in the UK’s April Retail Sales report offered much-needed impetus to GBP buyers. Although it remains to be seen if the major can extend the recovery momentum going forward. UK retail sales arrived at 1.4% over the month in April vs. -0.2% expected and -1.2% previous. The core retail sales, stripping the auto and fuel sales out, stood at 1.4% MoM vs. -0.2% expected and -0.9% previous.

Week ahead: Bailey to boost bulls?

With the fundamental theme more or less surrounding hawkish Fed expectations, growth and inflation concerns, Monday’s Bailey’s speech will be closely eyed for GBP/USD to extend its recovery.

Bailey is due to speak on "Monetary policy, policy interaction and inflation in a post-pandemic world with severe geopolitical tensions" at the Oesterreichische National Bank Annual Economic Conference, in Vienna.

Any hints of inflation broadening out will revive aggressive BOE rate hike expectations, rendering positive for the pound.

On Monday, Chinese activity data will drop in the Asian session, which could have a significant impact on the market’s perception of risk sentiment. Eventually, it could set the tone for markets for the week ahead.

Tuesday will see a raft of the preliminary business PMI reports from the UK, as well as, the US, with upbeat prints to help ease economic growth concerns across the globe.

The dollar correction could likely extend, in absence of any top-tier US economic data in the early part of the week, with all eyes on the May Fed meeting’s minutes due to be released on Wednesday. Ahead of the FOMC minutes, the US Durable Goods Orders will be reported.

On Thursday, the pair could risk some volatility amid holiday-thinned trading conditions, as most major European markets will remain closed in observance of Ascension Day. The second estimate of the US Q1 GDP will be reported later on Thursday alongside the weekly jobless claims and other minority data.

Nothing significant is on the cards on Friday, except for the US Core PCE Price Index, revised Michigan Consumer Sentiment and Fed policymaker James Bullard’s speech. 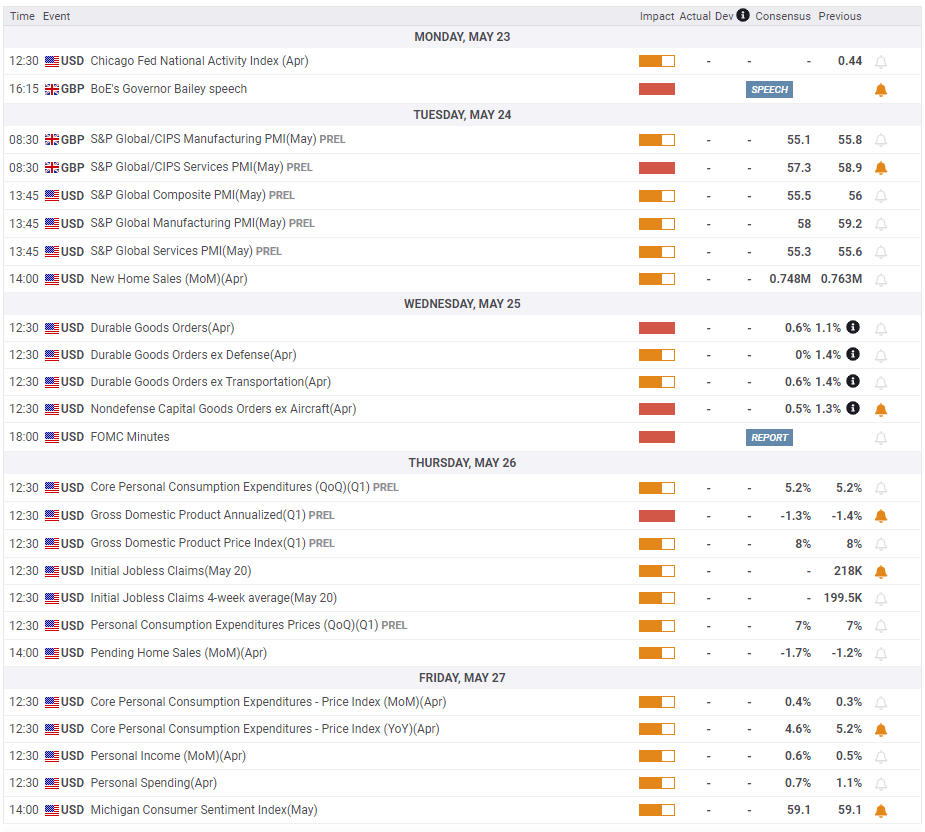 GBP/USD tested the 1.2540 resistance, where the Fibonacci 23.6% retracement of the downtrend that started in late March is located, before going into a consolidation phase on Friday. On a bullish note, the pair managed to close above the 21 DMA for the first time since March 22 and the Relative Strength Index (RSI) indicator on the daily chart rose to 50.

On the other hand, if sellers manage to flip 1.2440 into resistance, the pair could come under bearish pressure and decline toward 1.2340 (static level) and 1.2300 (psychological level, static level) afterwards.

The FXStreet Forecast Poll shows that the pair is likely to have a difficult time making a decisive move in either direction next week. The one-month outlook points to a bullish shift with the average target sitting at around mid-1.2500s. 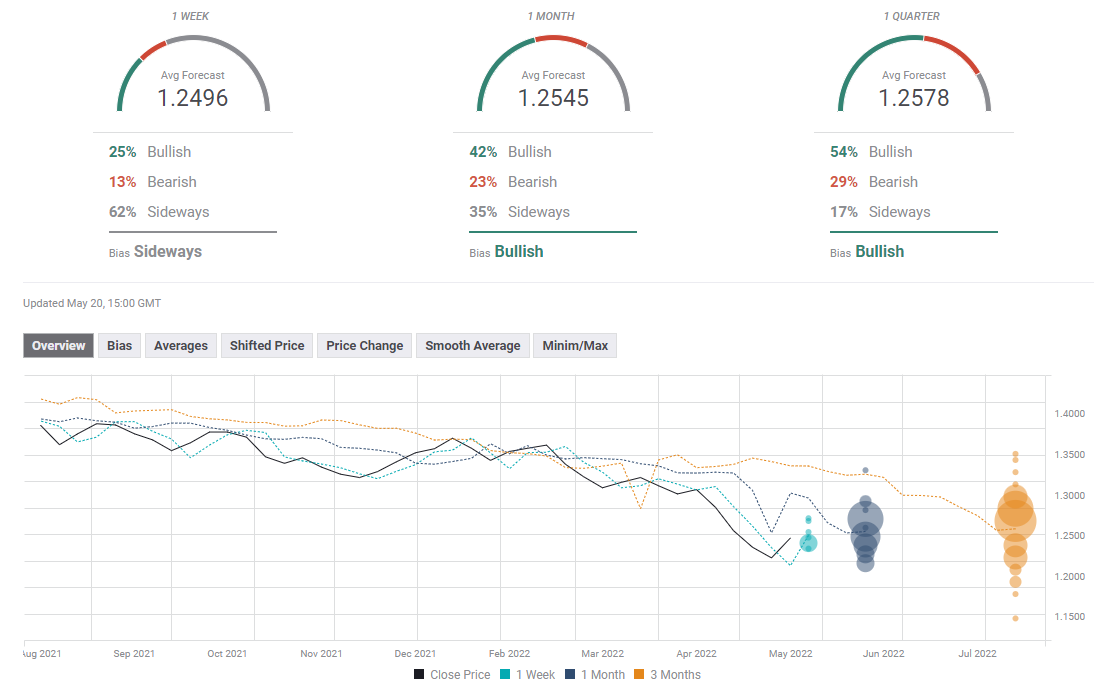