The US dollar’s retracement from two-decade highs alongside a positive shift in risk sentiment emerged as the key catalysts that helped GBP/USD extend its recovery rally. Dip-buying remains the underlying theme for cable traders, as they head into a holiday-shortened US Nonfarm Payrolls week.

GBP/USD built on the previous week’s recovery from two-year lows of 1.2155 and added as much as 200-pips on the week. In doing so, the currency pair traded at the highest level in a month above 1.2650.

Meanwhile, the US dollar booked back-to-back weekly losses for the first time this year, continuing its downward correction across its main competitors. This came on the heels of the retreat in the US Treasury yields, as markets got convinced that the Fed may be less aggressive on its rate hike outlook in the coming months amid signs of a slowing US economy.

Also, signs that the market’s pricing of the Fed’s hawkishness may have peaked added to the extended correction in the buck. The Fed May meeting’s minutes also turned out not-that-aggressive, as it hinted that the world’s most powerful central bank could pause policy tightening in September.

On the GBP-side of the story, a combination of less aggressive Fed tightening concerns combined with the rebound in Wall Street to underpin risk-on trading throughout the week. A return of risk-on flows kept sentiment around the higher-yielding pound buoyed.

Bank of England (BOE) governor Andrew Bailey said on Monday that the central bank is prepared to raise interest rates again in order to bring inflation down.

Cable, however, failed to keep up with its positive start to the week and tumbled on Tuesday.  The sell-off was triggered by a slump in the UK S&P Global Services PMI, which arrived at 51.8 in May vs. 57.3 expected. The decline in the UK services sector activity suggested that recessionary fears are sinking into British households, battling with the cost-of-living crisis.

Although bulls quickly jumped back into the game, It was also aided by UK Finance Minister Rishi Sunak’s household support plan announced Thursday, which led to an extension of sterling’s upside. Sunak pledged to send one-off £650 payments to around 8 million of the country's lowest-income households, amounting to around £5 billion in support.

Friday's data from the US revealed that the Core Personal Consumption Expenditures (PCE) Price Index, the Fed's preferred gauge of inflation, declined to 4.9% on a yearly basis in April from 5.2% in March. This reading came in line with the market expectation and failed to help the dollar find demand ahead of the weekend.

Week ahead: All eyes on US NFP

The week ahead is relatively calm, as there are no first-tier economic data releases scheduled on either side of the Atlantic in the first half of the week.

Infact, the week begins with a Memorial Day holiday in the US, which could restrict the currency pair’s price action. Tuesday is absolutely data-dry except for the US CB Consumer Confidence data.

The final version of the UK Manufacturing PMI for May will be reported on Wednesday, followed by the US JOLTS job openings and the ISM Manufacturing PMI. Speeches by Fed policymakers will be also closely eyed for fresh hints on the central bank’s rate hike track.

The UK market will be closed on Thursday, in observance of Spring Bank Holiday. The US will see the weekly jobless claims dropping after the ADP Nonfarm Employment Change report.

On Friday, the US labor market report will stand out and could have a significant impact on the market’s pricing of the Fed tightening plans. Also, the UK and US Services PMI releases will entertain GBP traders. 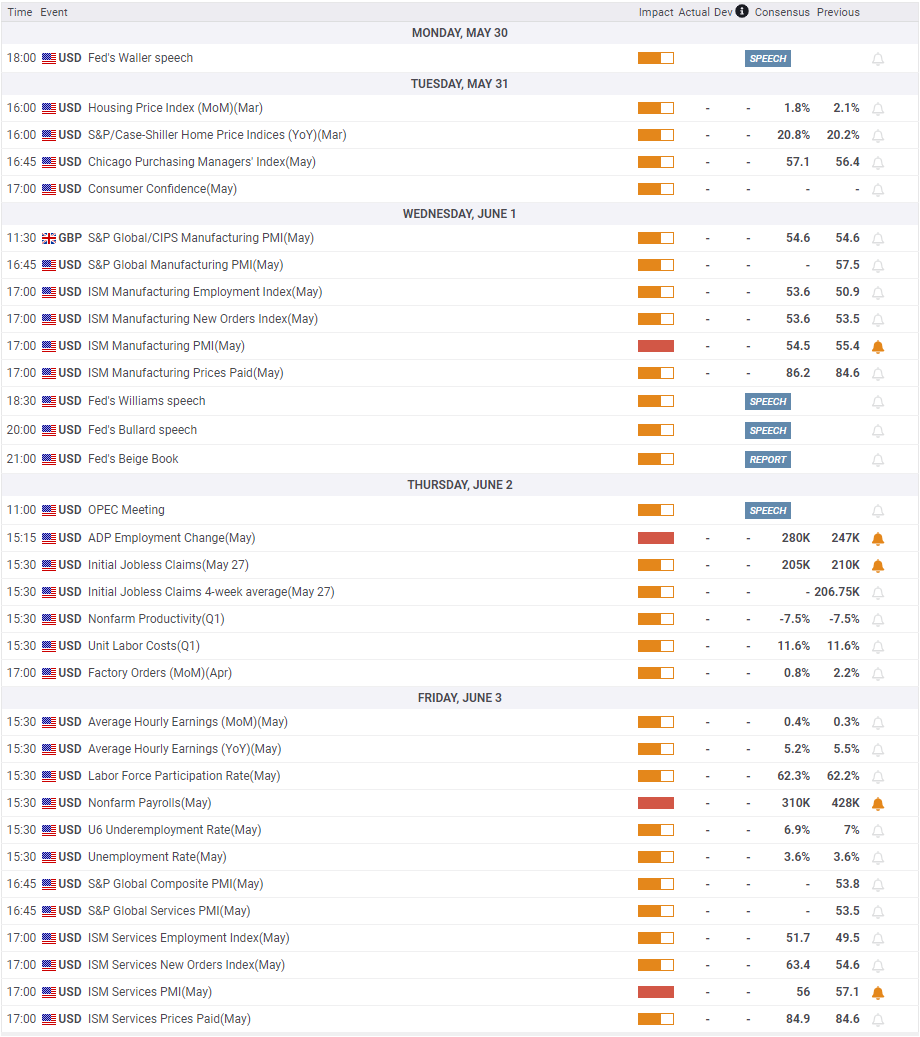 The Relative Strength Index (RSI) indicator on the daily chart rose to its highest level since late-February on Friday and GBP/USD closed the last six trading days above the 21 DMA, showing that buyers continue to dominate the pair's action.

On the upside, 1.2700 (psychological level) could act as interim resistane ahead of 1.2750, where the Fibonacci 38.2% retracement of the downtrend that started in late March meets the 50 DMA. In case this level turns into support, the next bullish target could be seen at 1.2900 (Fibonacci 50% retracement).

1.2540 (Fibonacci 23.6% retracement) aligns as first support before 1.2440 (21 DMA). A daily close below the latter could be seen as a bearish sign and cause buyers to move to the sidelines. In that case, additional losses toward 1.2300 (static level) could be witnessed.

The FXStreet Forecast Poll shows that several experts see GBP/USD targeting 1.2700 next week. The one-month outlook, however, shows that the pair is widely expected to go into a consolidation phase with half of the polled analysts expecting it to move sideways in that period. 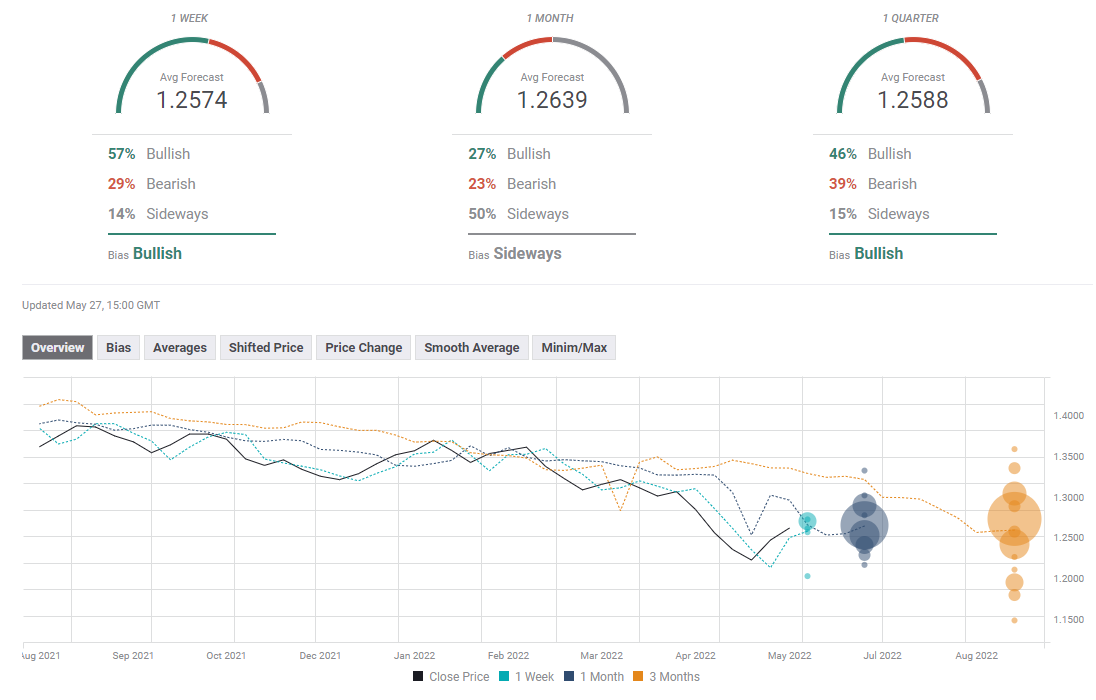