GBP/USD managed to preserve a major part of the previous week’s upsurge, led by the hawkish Bank of England (BOE) interest rate decision, this week. The focus once again shifted back to the US Federal Reserve’s (Fed) tightening outlook, as US inflation hit a fresh 40-year high. Meanwhile, the UK economy withstood the Omicron blow. Cable, however, remained contained amid looming Brexit concerns. Heading into the next week, investors will be keeping their eyes on the top-tier economic releases from both sides of the Atlantic, including the UK inflation data and the FOMC minutes.

GBP/USD in the rear: Hotter US inflation caps BOE-led rally

The pound is likely to emerge as one of the best performers across G10 currencies this week, defying the broad US dollar strength. However, the currency pair mostly maintained its previous week’s higher ground, induced by the hawkish BOE rate hike. The pair traded between 1.3485-1.3645 amid encouraging fundamentals and persistent Brexit concerns.

GBP/USD entered a phase of bullish consolidation following a solid recovery rally to two-week highs of 1.3629, as investors digested stunning US Nonfarm Payrolls. The headline numbers arrived at 467K vs. 150K expectations and revived the demand for the US dollar across the board, putting an end to the BOE-led rally in the cable. Monday saw an extension of the correction in the pair, as it hit weekly lows at 1.3489.

From there, bulls picked up courage, although bears left no stone unturned. Expectations of an aggressive tightening from the Fed dominated all-through the week, keeping the greenback buoyed alongside the Treasury yields. Amid a relatively light economic calendar, the US Consumer Price Index (CPI) stood out while markets also awaited the UK Q4 GDP release. Meanwhile, BOE Chief Economist Huw Pill said Wednesday, “that a case can be made for a measured rather than an activist approach to policy decisions,” adding “that is what I would label a ‘steady handed’ approach to monetary policy. "The cautious remarks from the BOE policymaker combined with the pre-US CPI anxiety kept the risk-sensitive cable on the back foot.

Looming concerns surrounding Brexit continued to play its part in keeping GBP bulls cautious, as European Union (EU) and UK attempts to restart negotiations over the post-Brexit trading relationship in Northern Ireland (NI) have so far failed to make any progress. Finally on Thursday, the currency pair broke out of its weekly range to the upside and clinched fresh three-week highs of 1.3645, despite the hotter US CPI, which came in at 7.5% YoY in January vs. 7.3% expected. The spot, however, reversed sharply after St. Louis Federal Reserve President James Bullard called for “100 basis points in the bag by July 1."

On Friday, mixed UK GDP numbers for the Q4 failed to impress GBP bulls, as the Fed sentiment continued to remain the main market driver, impacting the dollar valuation. Although the retreat in the US Treasury yields from over two-year highs helped limit the downside in GBP/USD. UK’s Foreign Secretary Liz Truss will meet with her EU counterpart Maros Sefcovic, on Friday to continue discussions, even though talks haven’t moved forward.

GBP/USD: A busy week ahead

The currency pair remains resilient to the dollar’s strength heading into a new week. It’s a quiet start to a relatively busier week on Monday, as Valentine’s Day offers nothing for GBP lovers.

On Tuesday, the UK employment data will be reported, with the ILO Unemployment Rate Claimant Count numbers to be closely eyed. The same day, the US releases the Producer Price Index (PPI), although it may offer little trading opportunities for the market participants ahead of Wednesday’s critical UK inflation, US Retail Sales and the January Fed meeting minutes. These events will provide fresh insights on the BOE-Fed monetary policy divergence theme, having a significant impact on cable.

On Thursday, the mid-tier economic data from the US will keep pair traders entertained. The US Housing data, Jobless Claims and regional manufacturing survey are all scheduled to drop in. Friday offers the UK Retail Sales, with the core figures likely to come in at -0.5% and 1.1% on a monthly and an annualized basis respectively. The US docket remains light on the final day of the week, with Existing Home Sales the only relevant release. 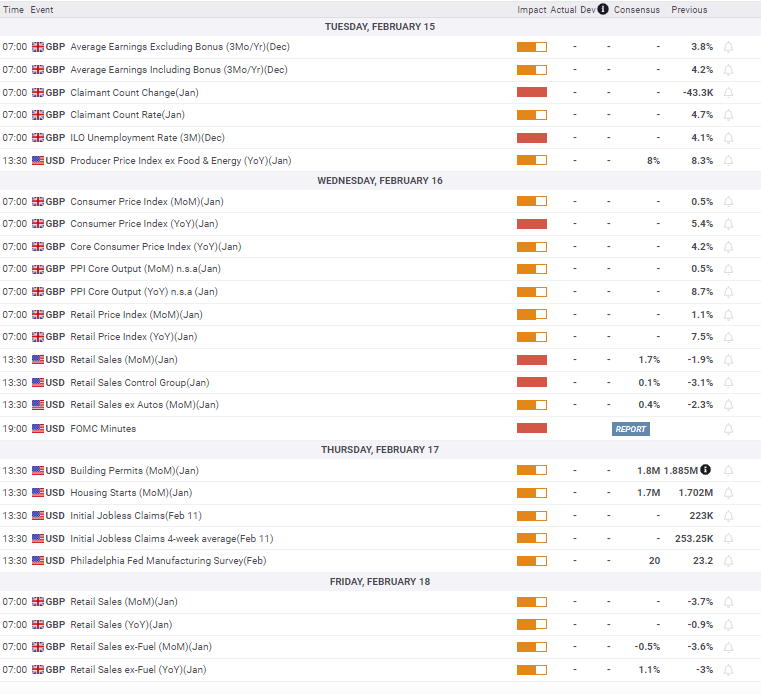 GBP/USD closed above the 100-day SMA for eight straight days and the Relative Strength Index (RSI) indicator on the daily chart holds above 50, suggesting that buyers are looking to continue to dominate the pair's action.

Nonetheless, cable needs to break out of its 10-day-old range in order to determine its next short-term direction. On the upside, 1.3600 (Fibonacci 23.6% retracement of the latest uptrend) forms the upper limit of the channel and a daily close above that level could open the door for additional gains toward 1.3650 (static level) and 1.3700 (200-day SMA).

Despite the fact that the British pound managed to stay resilient against the dollar this week, experts don't see GBP/USD pushing higher next week. The average target on the one-week view aligns at 1.3520. Moreover, the FXStreet Forecast Poll shows that the selling pressure is likely to remain intact for the next few weeks with a bearish target of 1.3440 on the one-month view. 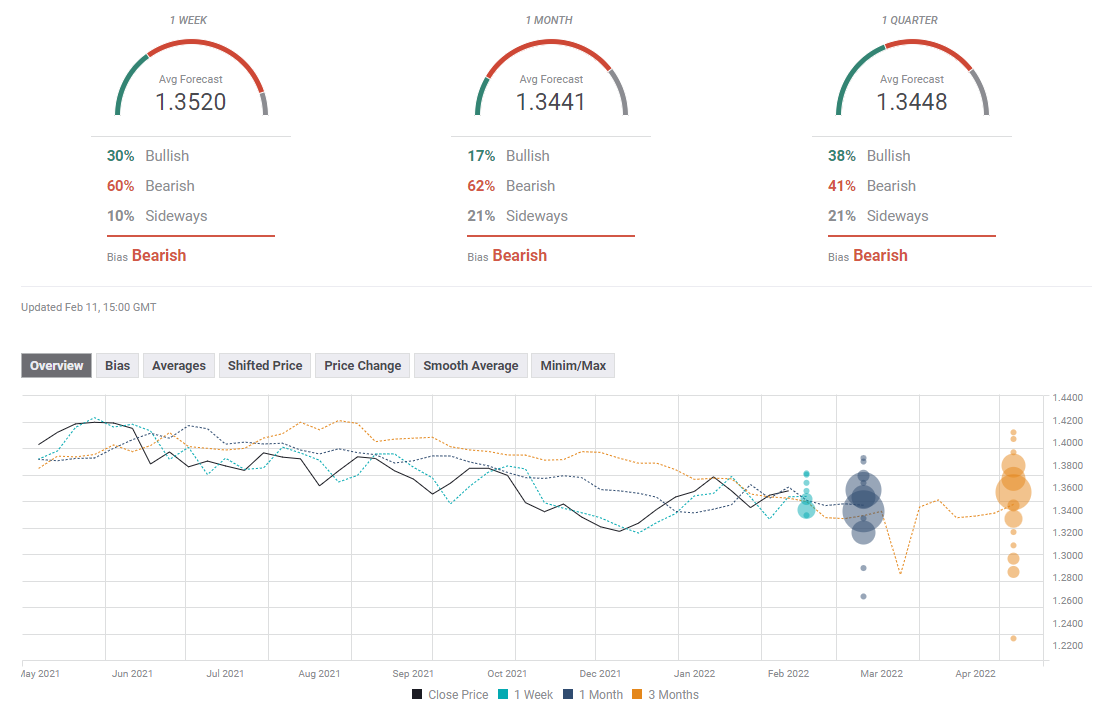