Having lost roughly 300 pips in the previous week, GBP/USD ended the week marginally lower, below the 1.1800 mark. The US dollar recovery and hawkish Fed rate hike expectations were the key catalysts that smashed the currency pair to the lowest level in two months at 1.1717. Looking ahead, GBP bulls brace for more pain as US Nonfarm Payrolls (NFP) grab attention in a holiday-shortened week.

GBP/USD accelerated its downward spiral at the start of the week, as the recovery in the US dollar picked up strength, as investors ramped up bets for aggressive Fed tightening in anticipation of the Kansas City Fed's Jackson Hole Economic Symposium held on August 25-27. Resurfacing China's growth concerns also helped the safe-haven dollar to extend the upside.

The sell-off extended on Tuesday, and cable hit fresh two-year lows at 1.1717, as the greenback touched the highest level in 19 years against its major peers amid renewed fears over a potential recession in the euro area and the UK. However, the Preliminary S&P Global business PMI reports from across the euro area economies, and the UK eased recessionary concerns and snapped the dollar's rally as risk flows returned. Weak US Preliminary S&P Global Services and Composite PMIs combined with a sharp drop in New Home Sales accentuated the buck's retreat. That offered a much-needed respite to GBP bulls, as the currency pair rebounded sharply to near the 1.1880 region, staging a staggering recovery.

GBP/USD sellers, however, returned on Wednesday, as dollar bulls regained control amid a negative shift in risk sentiment. Investors reassessed the risks of an imminent global recession after the business PMIs pointed to an extended downturn in economic activity. Additionally, traders refrained from placing any directional bets on the higher-yielding sterling, progressing towards the Jackson Hole Symposium. US Treasury yields extended their weekly run up, as the benchmark 10-year rates hit the highest in two months near 3.125%, driven by expectations of an outsized Fed rate increase in September despite the headline miss in the US Durable Goods and discouraging Pending Home Sales data.

Heading into the three-day Fed symposium on Thursday, investors resorted to profit-taking on their US dollar long positions. The yields on the US government bonds also tumbled while Wall Street indices recovered firmly, lending some additional support to the pair. GBP/USD, however, failed to sustain the rebound once again above 1.1850, as the downside in the dollar remained cushioned by the upward revision to the US Q2 GDP and somewhat hawkish Fed commentary. The US GDP shrank 0.6% in Q2, annualized, less than the 0.9% contraction the Commerce Department reported in the preliminary reading last month. Meanwhile, St. Louis Fed President James Bullard and Kansas City Fed President Esther George sounded hawkish, offsetting dovish remarks from Philadelphia Fed President Patrick Harker.

On Friday, the major witnessed good two-way businesses before the critical US PCE inflation data and Powell's opening remarks on day two of the Jackson Hole Symposium. Cable tumbled below 1.1800 again after the dollar regained the upside traction while the pound suffered after the British energy regulator, Ofgem, announced that the average annual household energy bills will rise by 80% from October to 3,549 pounds. The tide turned against GBP bears in the European session, as the dollar came under pressure in spite of a decent comeback in the yields.

Softer US PCE inflation failed to offer any respite to USD bulls but Powell's prepared remarks rescued them, smashing the pair back around the 1.1800 demand area. The Fed Chief said that "decision on September rate hike will depend on totality of data since July meeting." According to the CME FedWatch Tool, odds of a 75 bps rate hike now stand at 55%, down from 65% seen on Thursday.

With the Jackson Hole symposium out of the way, GBP/USD traders gear up for a quiet start to the critical US labor market data week. There are no top-tier UK economic news releases slated for this week, therefore, the American macro data and the Fed tightening expectations will be closely eyed for fresh trading impetus on GBP/USD.

Monday will be data-empty on the US docket while the UK observes the Summer bank holiday. Low volumes and minimal volatility could exaggerate the moves in the pair, as the dust settles over Powell's aftermath. The focus then turns towards Tuesday's US Conference Board (CB) Consumer Confidence data and JOLTS Job Openings while New York Fed President John William's speech will also likely be hotely followed.

Markets will eagerly await the US ADP Nonfarm Employment Change on Wednesday, as it will be the first release using the new methodology. Cleveland Fed President Loretta Mester's speech will precede the US jobs data.

Thursday will see the release of the UK Final S&P Global Manufacturing PMI, which will likely have little to no impact on the pound. Later in the day, the US weekly Jobless Claims will drop in, followed by the US ISM Manufacturing PMI and Prices Paid sub-component. This data could have a significant impact on the dollar valuations ahead of Friday's American employment data. The August NFP reading will be key to determining the September Fed rate hike decision. 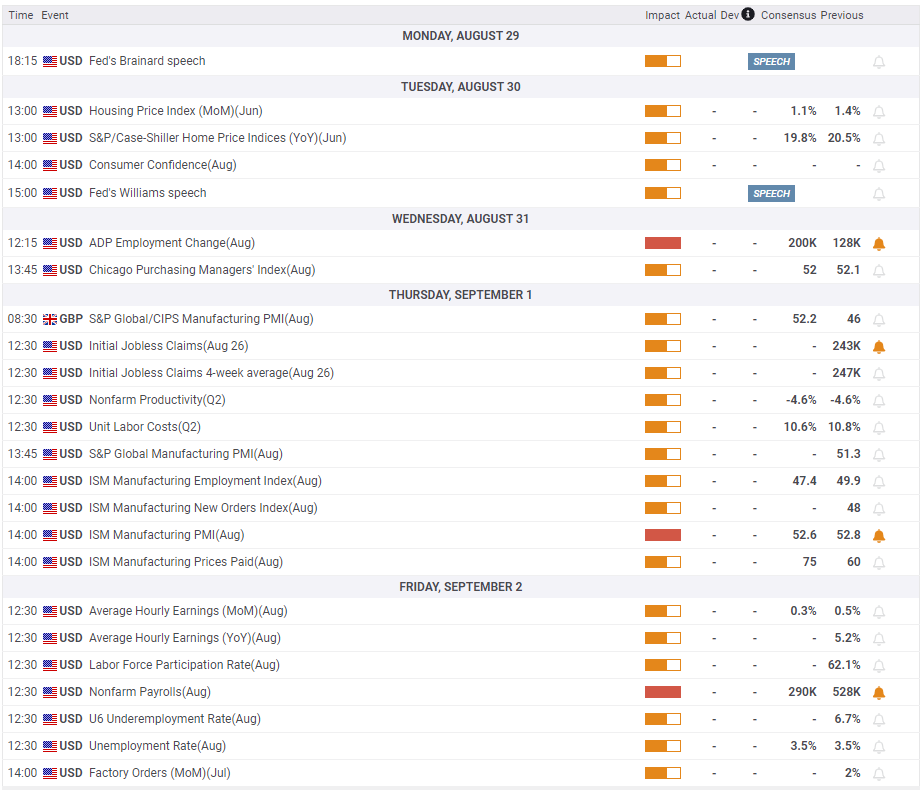 The short-term technical outlook for GBP/USD remains in favor of bears, with a break below the 1.1700 mark inevitable in the coming days. The currency pair has spotted a bear flag formation on the daily sticks.

A downside break below the rising trendline support at 1.1777 on a daily closing basis will confirm a bearish flag. The downtrend will then extend towards the 1.1650 psychological level. Ahead of that the 1.1705 demand area will challenge the bullish commitments. That zone is the confluence of the two-year lows and the falling (dashed) trendline.

The 14-day Relative Strength Index (RSI) inches lower while sitting just above the oversold region, suggesting that there is more room for a downside move. Adding credence to the bearish potential, the 21 and 50-Daily Moving Averages (DMA) bearish crossover confirmed earlier this week also remains in play.

Alternatively, bulls need a sustained move above the rising trendline resistance at 1.1879 to negate the near-term bearish bias. The next significant upside target is aligned at 1.1900 the round figure. The August 19 high at 1.1937 will be next on buyers' radars.

The FXStreet Forecast Poll paints a mixed picture of the GBP/USD's near-term outlook with the one-week average target sitting slightly above 1.1800. The one-month outlook remains bullish with experts' average forecast pointing to a rebound toward 1.2000. 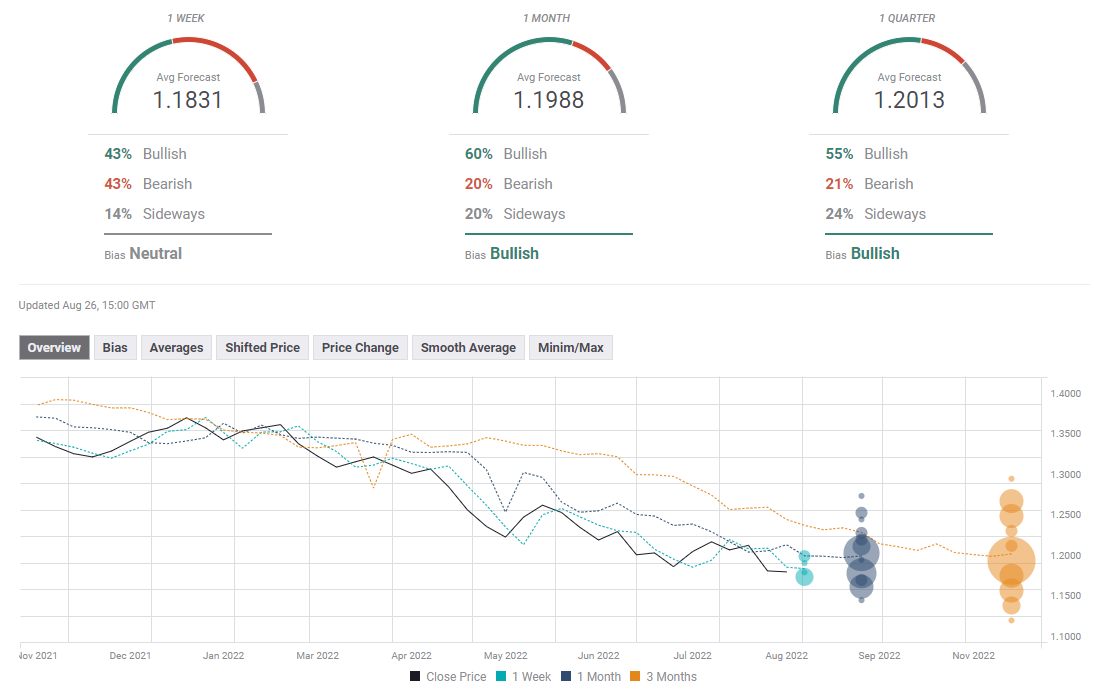