GBP/USD witnessed good two-way businesses in another volatile week, dominated by hawkish Fed expectations and a bunch of top-tier economic data from both sides of the Atlantic. Cable settled the week deep in the red below 1.1500, down nearly 200 pips, as traders look forward to critical policy decisions from the US Federal Reserve (Fed) and the Bank of England (BOE) due in the week ahead.

It was all about the US inflation releases and hawkish Fed rate hike expectations. The US dollar extended its corrective declines from two-decade peaks at the start of the week as risk flows dominated amid hopes of inflation easing in the US economy, which could give the Fed a chance for a breather. In the wake of these factors, GBP/USD continued its previous recovery mode from 37-year lows of 1.1405 and recaptured the 1.1700 barrier. Markets wagered about 70% odds of a 75 bps BOE rate hike this month, as a new week kicked in.

Monday’s weak UK GDP and Manufacturing production data failed to deter GBP bulls. The UK GDP monthly release showed that the economy rebounded in July, growing at 0.2% vs. 0.5% expectations and -0.6% previous. Meanwhile, Manufacturing output arrived at 0.1% MoM in July versus 0.6% expectations and -1.6% booked in June. Even the mixed UK labor market report published on Tuesday was overlooked, as all eyes remained on the US Consumer Price Index (CPI) release. The UK’s official jobless rate dropped to 3.6% in July vs. 3.8% expected while the claimant count change showed an unexpected increase in August.

Tables turned after the US headline and core CPI readings outpaced market expectations across the time horizon and cemented a 75 bps September Fed rate hike. Markets predicted a 40% chance of even a 100 bps lift-off. The dollar rallied hard and triggered a fresh risk-off wave on increased hefty Fed rate hike bets, triggering a ‘sell everything’ mode. The major witnessed a 300 pips sell-off and breached the 1.1500 level on the data. The US CPI eased to 8.3% on a yearly basis in August from 8.5% in the previous month. The reading surpassed estimates pointing to a decline of 8.1%. The Core CPI rose by 0.6% MoM in August (0.3% expected) and climbed to 6.3% on yearly basis, up from 5.9% in July and 6.1% expected.

Wednesday’s brief rebound in cable, helped by upbeat UK inflation data, faded into the second half of the week. The UK CPI 12-month rate came in at 9.9% in August when compared to 10.1% seen in July while missing estimates of a 10.2% print. Meanwhile, the core inflation gauge rose to 6.3% YoY last month versus 6.2% booked in July, meeting the consensus of 6.3%. Following the data, 75 bps September BOE rate hike expectations dropped to about 55%. The US Producer Price Index (PPI) on Wednesday also bettered estimates, keeping the buoyant tone intact around the dollar while the US Treasury yields extended their upsurge.

Undisputed dollar strength amid the hawkish Fed narrative combined with persisting Brexit concerns took the wind out of the pair’s rebound on Thursday. A lack of response from Britain to the European Union (EU) despite approaching the date to trigger Article 16 relating to Brexit exerted additional downside pressure. Meanwhile, British citizens remained unconvinced about the new UK PM Liz Truss’s ability to tackle the energy crisis, despite the energy relief bills likely to take effect from next month.

On Friday, a positive surprise in the Chinese economic activity data failed to spur risk flows, and therefore, the higher-yielding pound remained on the defensive. Downbeat UK Retail Sales for August also weighed further on the British currency, dragging GBP/USD to fresh four-decade lows at the 1.1300 level. Ahead of the weekend, however, the renewed dollar weakness allowed the pair to recover above 1.1400. The University of Michigan reported in its Consumer Sentiment Survey that the long-run consumer inflation expectation edged lower to 2.8% in September from 2.9% in August, causing US T-bond yields to turn south and the greenback to lose interest.

Another eventful week in the offing, with the Fed and BOE rate hike decision to rock the market amidst policy decisions from the Bank of Japan (BOJ) and Swiss National Bank (SNB) as well.

On the economic data front, it will be a quiet start to the critical week, as the UK market is closed on Monday, in observance of the funeral of Queen Elizabeth. The US data also remains data-empty. On Tuesday, the mid-tier US housing data will be reported, which is unlikely to have any impact on the dollar valuations ahead of Wednesday’s Fed rate hike announcement.

With a 75 bps Fed rate hike fully baked in, hints on the future tightening path and the bank’s Summary of Economic Projections (SEC) will steal the show. The US dollar could keep the upper hand, irrespective of the Fed outcome. The greenback could kick off a fresh uptrend should the Fed surprise with a full percentage point increase. Cable is set to lose amid a hawkish Fed rhetoric. But the pair’s reaction to the Fed decision could be undone, as traders gear up for Thursday’s BOE policy meeting.

Although it’s not a ‘Super Thursday’, the BOE’s policy guidance will hold the key, as a 50 bps rate hike is widely expected. The central bank’s view on the energy crisis and the country’s economic outlook will be closely examined. The US weekly Jobless Claims will entertain American traders, in absence of top-tier data on Thursday.
The S&P Global Manufacturing and Services from across the euro area economies, the UK and US will flood the calendar on Friday, bringing an end to an action-packed week. 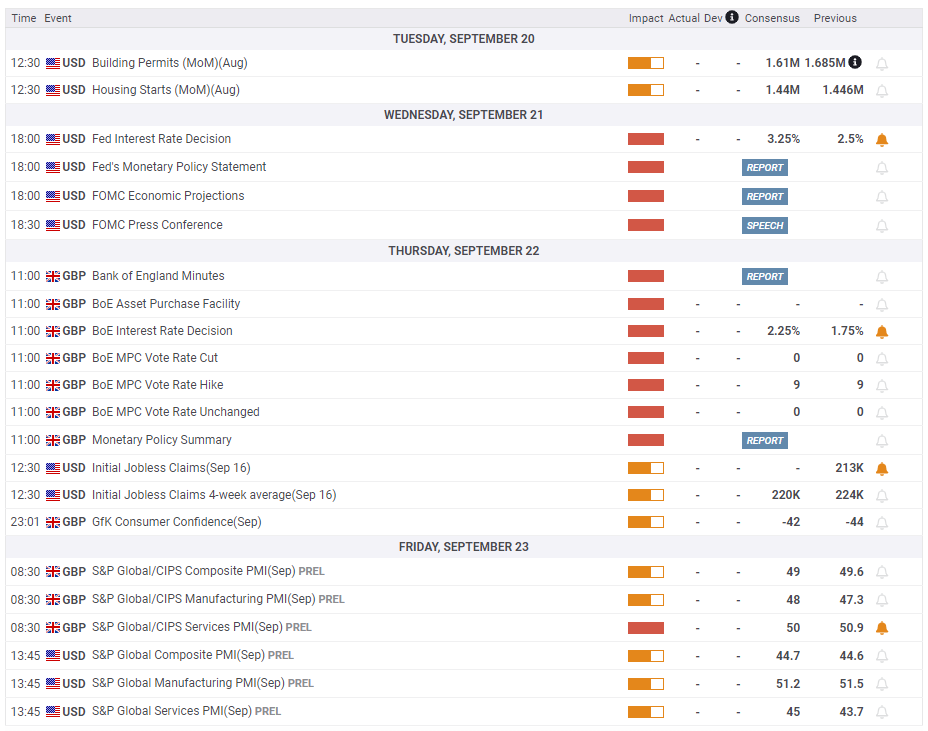 GBP/USD climbed above 21DMA on Tuesday but failed to close the day above that level, highlighting the significance of this resistance. Additionally, the Relative Strength Index (RSI) indicator on the daily chart holds slightly above 30, suggesting that the pair has more room on the downside before turning technically oversold. Finally, the one-month-old descending trend line stays intact.

The FXStreet Forecast Poll shows that experts don’t expect GBP/USD to stay bearish in the near term. The one-week and the one-month views both suggest that the pair is seen either staging a rebound or staying in a consolidation phase during these timeframes. 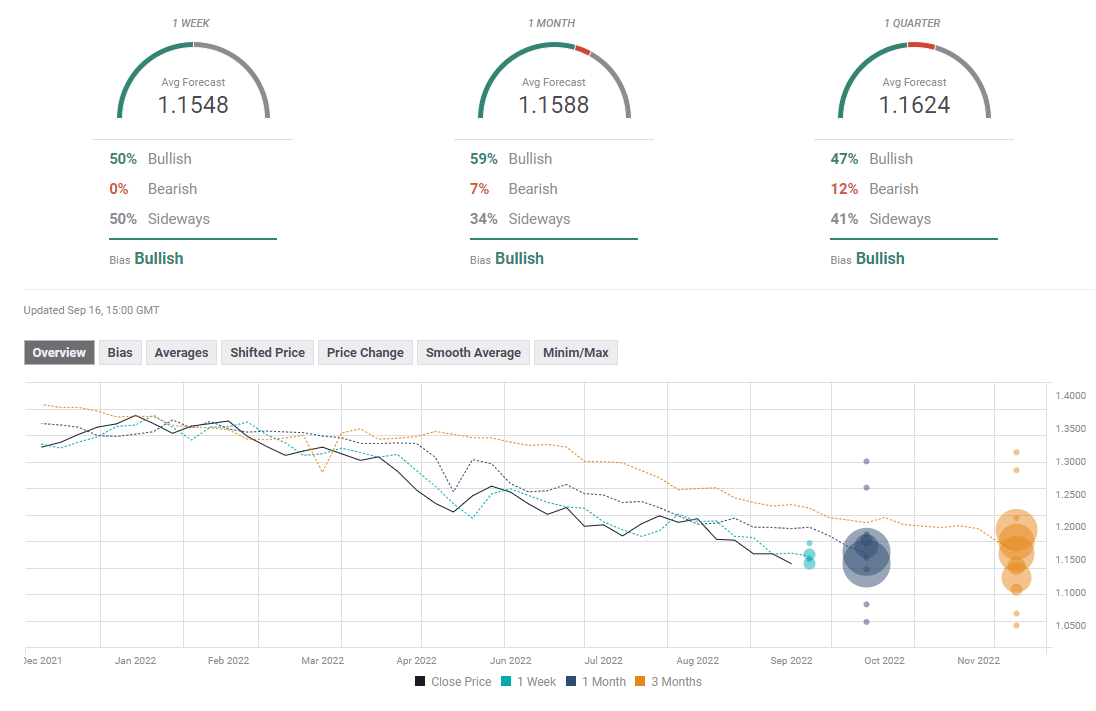