The GBP/USD pair gapped lower and dived to the lowest level since early October flash crash on media reports, over the weekend, that the UK Prime Minister Theresa May would signal a 'hard Brexit' during a keenly anticipated Brexit speech on Tuesday. May is expected to emphasis on curbing free movement of people by regaining control over Britain's borders and immigration laws. Doing so, the UK will lose access to the European Union's single market and resurfaced uncertainty over economic implication of the historic move.

Meanwhile, the US Dollar attempted a tepid recovery on Monday after being slumped for a third consecutive week. On Friday, positive US economic data provided a short-lived push to the greenback. The US monthly retail sales recorded a fairly strong m-o-m growth, while a rise in PPI during December pointed to the upcoming inflationary pressure, which would allow the Fed to continue with normalization of its monetary policy. Investors, however, remained uncertain if the incoming administration of Preside-elect Donald Trump would be able to deliver on promised fiscal stimulus and utilized the bounce to continue with the long-dollar unwinding trade.

With the US markets closed in observance of Martin Luther King Day and in absence of any major market moving releases, traders on Monday might take some cues from BoE Governor Mark Carney's speech ahead of the much awaited Brexit speech on Tuesday. 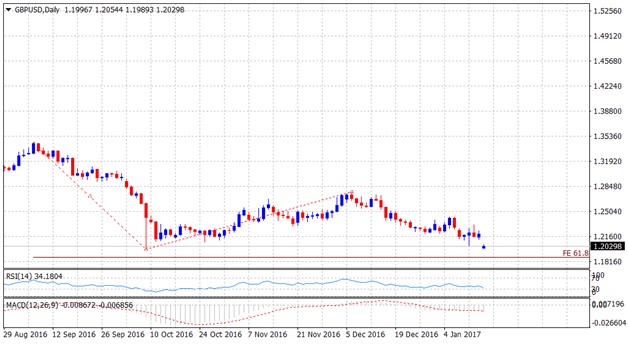 The pair did dip below 1.20 psychological mark but has managed to recover from lows. However, with short-term technical indicators still away from near-term oversold conditions, the pair seems more likely to come under some renewed selling pressure.

Hence, a convincing break below 1.20 handle would turn the pair vulnerable to extend its near-term strong downward trajectory towards sub-1.1900 level, representing 61.8% Fibonacci retracement level of 1.3445-1.1980 downslide and subsequent retracement to 1.2775 level.

Alternatively, a sustained recovery back above 1.2050-55 area might assist the pair back towards 1.2100 handle, which if conquered should trigger a short-covering rally further towards 1.2150 region, en-route 1.2200 round figure mark.