Inflation in UK eased to 9.9% in September from 10.1% in August, but still about five times above the central bank’s 2% target.

Overall negative near-term picture could be partially offset by better than expected UK PMI data which showed unexpected increase of activity in construction sector, sending the index to three-month high.

Daily studies show near-term structure weakening, following a pullback after repeated reject at round-figure 1.15 resistance, as negative momentum is rising and stochastic emerging from overbought territory. Fresh bears tested initial support at 1.1225 (Fibo 23.6% of 1.0348/1.1495 recovery leg), but need break here to further weaken near-term structure and open way for attack at key supports at 1.1082/1.1057 (10DMA/Fibo 38.2%) and psychological 1.10 level, to generate stronger reversal signal on break. Falling 30DMA offers immediate resistance at 1.1373, guarding the upper pivot at 1.1500, violation of which would bring bulls back to play. 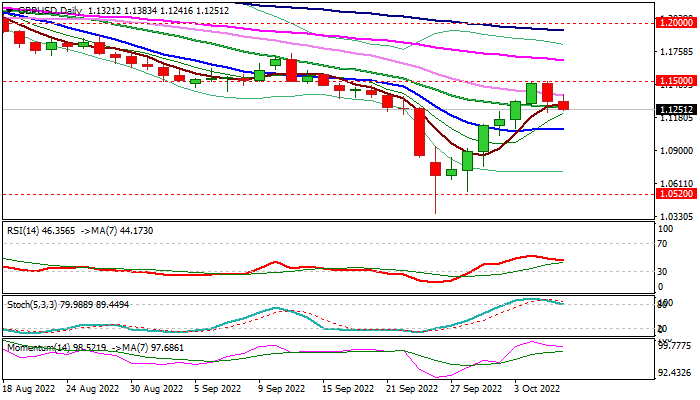 Interested in GBP/USD technicals? Check out the key levels