Enjoying the spring? The haze in London may keep British traders at home on a bank holiday, and that is not necessarily pound-positive. At the moment, markets are calm amid the long weekend in both the US and the UK, and after Friday's choppy trading, triggered by end-of-month adjustment.

Now that money managers have finished adjusting the portfolios, it is time to reexamine the fundamentals. People residing in the UK may enjoy the long weekend at home and in several European countries – but not in France nor Germany, where they are required to quarantine. These restrictions serve as a reminder of the B.1.167.2 variant. Sterling is on the back foot due to these fears.

Apart from vacations, it may also halt the next and last phase of Britain's reopening due on June 21. Health experts have been calling on the government to react to the strain first identified in India by postponing this loosening. In the meantime, authorities have settled for accelerating the vaccination campaign.

On the other side of the pond, Americans are also benefiting from a long weekend, and they have reasons to be cheerful about the economy. Perhaps it is even too much. Core Personal Consumption Expenditure (Core PCE) – the Federal Reserve's preferred measure of inflation –hit 3.1% in April.

Apart from exceeding estimates, it is also significantly above the bank's 2% target and may cause officials to rethink their accommodative policies. The specter of a rate hike is supporting the dollar.

Pound/dollar is already edging lower on Monday. How far can it go? 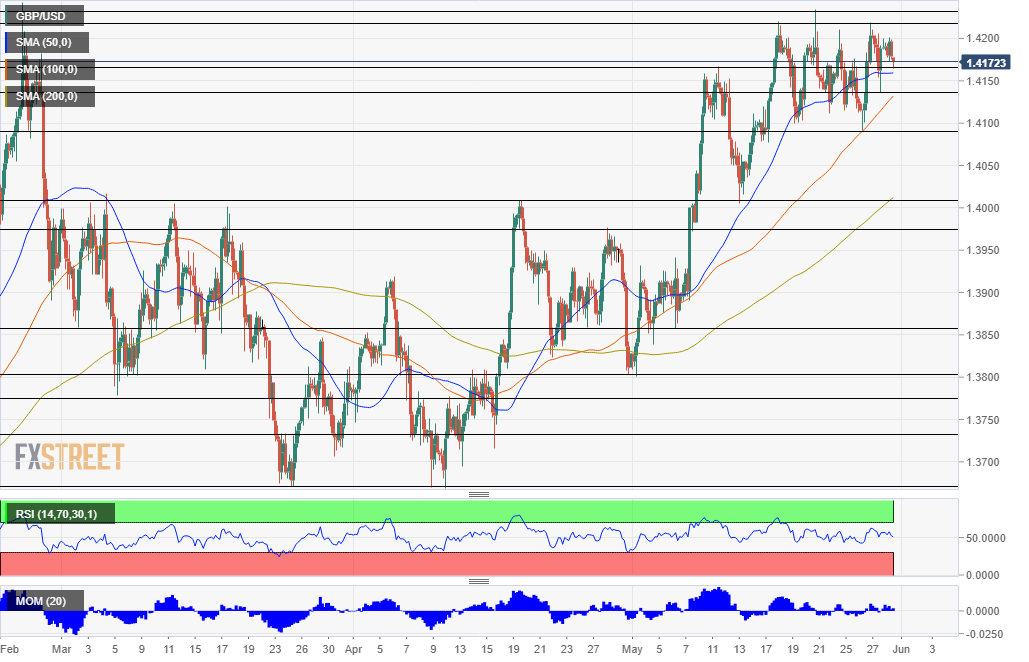 As mentioned earlier, the charts paint a brighter picture. Momentum on the four-hour chart is to the upside and despite the downdrift, cable is holding above the 50 Simple Moving Average. All in all, bulls have the upper hand.