Is the severe British lockdown bearing fruits? That could serve as a tiebreaker for GBP/USD, which has tackled 1.37 twice and may pierce higher.

Coronavirus cases have been dropping from the peak, providing hope that deaths – which have hit record highs – will decline as well. The decline in infections would also alleviate pressure on overstrained hospitals and calls by the opposition for even tighter restrictions. 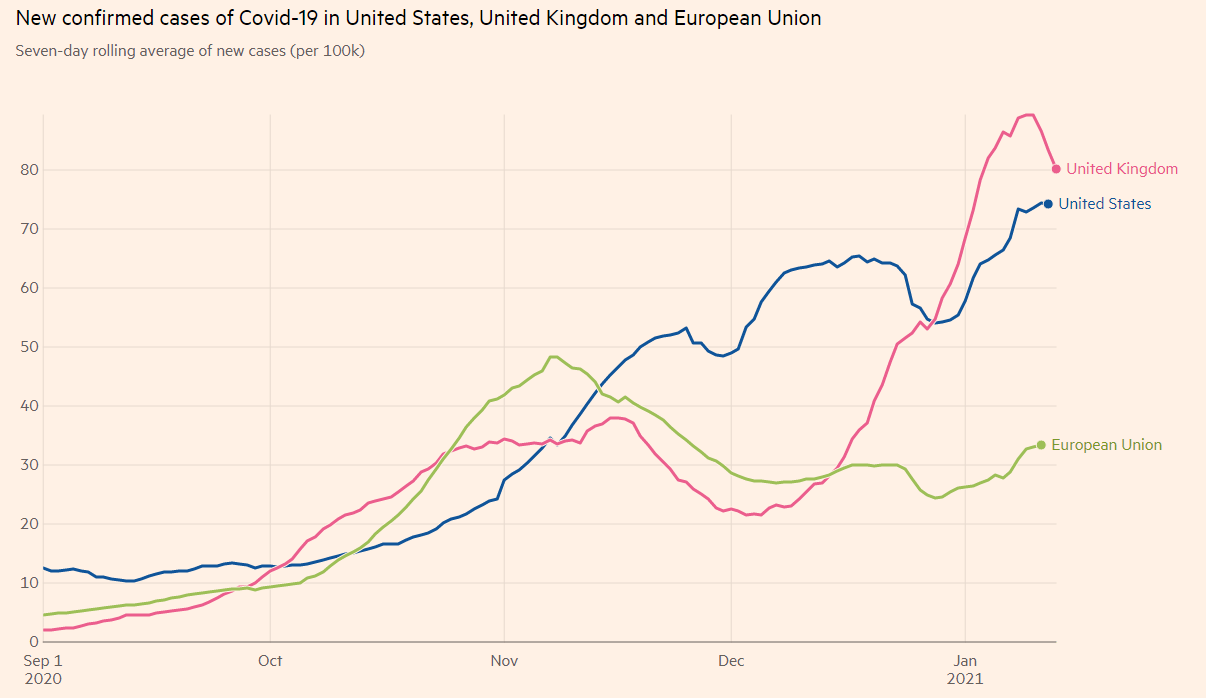 So far, cable has been pushed and pulled by two opposing forces. Starting from positive UK developments, the vaccination campaign continues at full speed, hitting 4.52% of the population – the highest in the Western world. Moreover, Britain begins administering jabs in pharmacies on Thursday, potentially accelerating the pace.

Investors are looking beyond the current misery and to the future. The faster a country inoculates its population, the quicker the economic recovery.

Focusing beyond the current hardship is also the name of the game in the US. According to reports, President-elect Joe Biden is set to present a large $2 trillion relief package – more than expected. The news has been pushing investors to stocks and away from bonds – resulting in higher yields. In turn, elevated returns on American debt boost the greenback.

The ball is now in the Federal Reserve's court. Will it buy additional bonds, pushing yields and the dollar lower? Jerome Powell, Chairman of the Federal Reserve, speaks later in the day and he may opt for taking the other direction – gradually tapering down the bank's support, as the economy needs less of it. His colleagues at the Fed have been mostly rejecting the option of purchasing fewer bonds – but the focus on optimistic forecasts is supporting the dollar.

Back to the grim present, investors will watch updated UK covid statistics and also US jobless claims, which are set to remain at the highs around 800,000.

All in all, the GBP/USD has room to rise despite fresh dollar strength.

Pound/dollar continues trading in a broad upward channel. Zooming in, momentum on the four-hour chart remains to the upside and the currency pair trades above the 50, 100 and 200 Simple Moving Averages – all bullish signs. Moreover, the slide earlier in the week pushed the Relative Strength Index away from 70, further away from overbought conditions.

EUR/USD is trading under pressure below 1.1900 amid US dollar rebound. A softer risk tone, Powell’s upbeat comments extend support to the greenback. ECB Panetta's remarks kept the euro bulls on the defensive and capped gains.

GBP/USD pair is extending losses toward 1.3650, as the US dollar recovers ground across the board amid risk-aversion. Worries about the AstraZeneca covid vaccine and unrest in Northern Ireland further weigh on the spot.

$1,730 holds the key for XAU/USD bulls amid a modest USD strength

A modest pickup in the USD demand exerted pressure on gold for the second straight session. The risk-off mood, softer US bond yields extended some support and might help limit losses.

Dogecoin breached an ascending triangle pattern on April 11, triggering a bull run. DOGE spiked nearly 17% in a single candle on the 12-hour chart hitting $0.080. Now, a retracement to the immediate support level at $0.071 seems likely before it starts to climb again.