The British pound stayed relatively quiet against its major rivals during the first half of the week as investors stayed on the sidelines while waiting for the general election in the UK despite the fact polls made it clear that British Prime Minister Boris Johnson's Conservatives were likely to win the majority.

With first exit polls hitting the newswires in the evening on Thursday, the GBP/USD pair gained more than 300 pips in a matter of 15 minutes as markets cheered Tories' landslide victory. The Conservative Party took 365 seats while the main opposition Labour Party came in second with 203 seats and easing fears over a no-deal Brexit.

While speaking outside his Downing Street office on Friday, "I urge everyone to find closure and to let the healing begin," Johnson said. "We are going to unite and level up ... bringing together the whole of this incredible United Kingdom - England, Scotland, Wales, Northern Ireland together, taking us forward, unleashing the potential of the whole country, delivering opportunity across the entire nation,"

The pair reached its highest level since mid-May at 1.3515 with the initial reaction but staged a deep correction on Friday to return to mid-1.33s. Nevertheless, the pair posted weekly gains for the third straight week and added more than 3% since the start of December.

Earlier in the week, the data published by the UK's Office for National Statistics (ONS) revealed that Industrial Production in October declined by 1.3% on a yearly basis and Gross Domestic Product (GDP) stagnated in October after contracting by 0.1% in September.

On the other hand, the broad-based USD weakness helped the pair's bullish momentum to remain intact. On Wednesday, the Federal Reserve, as expected, kept its policy rate unchanged within 1.5% - 1.75% range. During the press conference, FOMC Chairman Jerome Powell said he would have to see a "significant and persistent" pickup in inflation before considering a rate hike and shut the door to a hawkish shift in the policy outlook in the near-term. The greenback suffered heavy losses against its rivals on Powell's comments. However, with the US and China reaching an agreement on phase-one of the trade deal to avoid the December-15 tariff hike helped the currency recover some of its losses. The US Dollar Index, which tracks the USD's performance against a basket of six major currencies, snapped its four-week losing streak and closed with small gains above 97.

The IHS Markit will release the preliminary Manufacturing and Services PMI data for both the UK and the US on Monday. The ONS' Claimant Count Change, Consumer Price Index (CPI) and Retail Sales data will be featured in the UK economic docket as well. More importantly, the Bank of England (BoE) will publish its monetary policy statement and announce its interest rate decision on Thursday. Although the BoE is not expected to make any changes to its policy rate, it will be interesting to see how the bank assesses the disappearing risk of Brexit.

On the other hand, the core Personal Consumption Expenditures (PCE) Price Index, the Federal Reserve's preferred gauge of inflation, reading from the US on Friday will be watched closely by the market participants especially after Powell's remarks.

With this week's upsurge, the pair registered its first weekly close above the 200-week moving average (MA) since September 2014. Although this can be seen as a significant bullish development for the pair, the daily chart suggests that the pair could make a correction before the next leg up.

Both the Relative Strength Index (RSI) and the Momentum indicators on the daily chart remain in the overbought territory despite the correction witnessed in the second half of the day on Friday.

Despite this week's impressive performance, the FXStreet Forecast Poll shows that the average price target in one month the pair is 1.3076 with 73% of participants staying bearish. However, experts see the pair edging higher toward the 1.3400 handle next week. 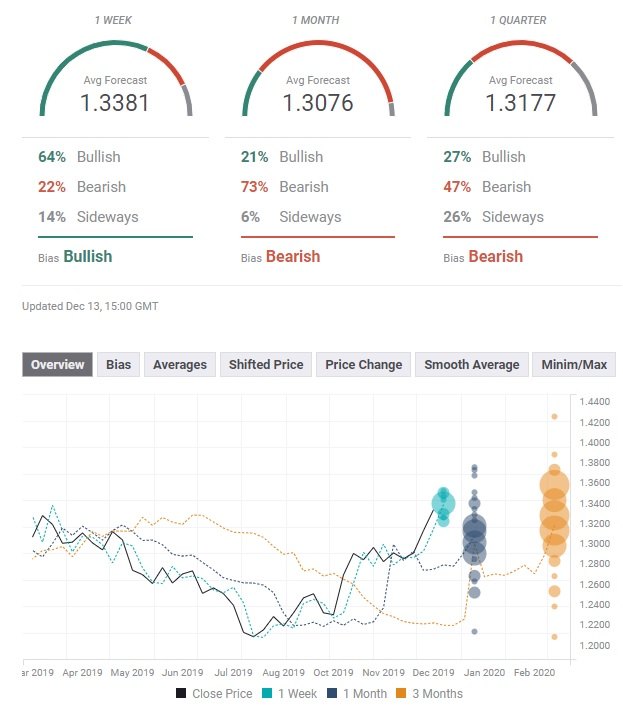 USD/JPY Forecast: US GDP and a rate decision from Japan promise action