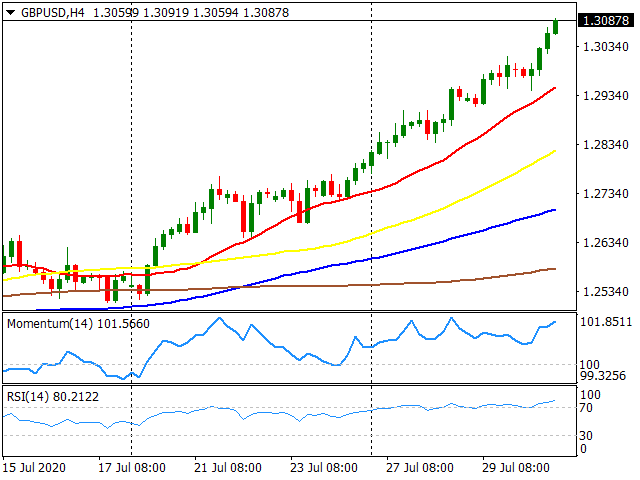 In the absence of macroeconomic data releases from the UK and Brexit headlines, the USD's market valuation drove the GBP/USD pair's action on Thursday. After dropping below 1.2950 during the early trading hours of the European session, the pair staged a sharp U-turn in the American session and climbed to its highest level since early March near 1.3100.

In its highly-anticipated report, the US Bureau of Economic Analysis (BEA) announced that the real Gross Domestic Product (GDP) in the second quarter contracted by 32.9% on a yearly basis. The BEA noted that the decline in the activity reflected the impact of the "stay-at-home" orders issued in March and April as a response to the coronavirus outbreak. US Treasury bond yields fell sharply with the initial reaction to this data and forced the USD to weaken against its rivals. There won't be any data featured in the UK economic docket on Friday and investors will be paying close attention to Personal Spending and Personal Income data from the US.

Earlier in the day, British Health Secretary Matt Hancock said that they were worried about the second wave of COVID-19 but these comments weighed more heavily on the UK's FTSE 100 Index rather than the GBP.

The RSI indicator on the daily and the 4-hour charts both remain in the overbought territory above 70, suggesting that GBP/USD is poised for a technical correction before the next leg up. In the meantime, the 20-day SMA is closing on the 200-day SMA and could bring in more buyers if it completes a bullish cross in the near-term.