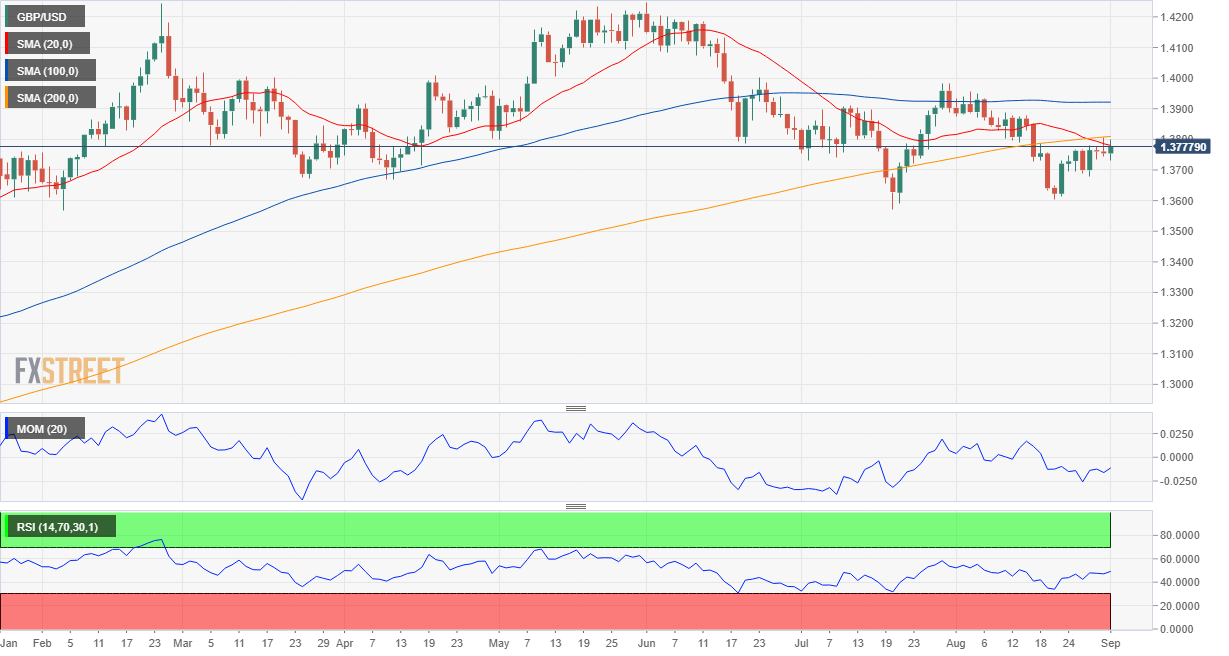 The GBP/USD pair posted a modest intraday advance this Wednesday, holding below the 1.3800 threshold. The pair topped at 1.3798 and currently trades in the 1.3780 price zone, backed by the broad dollar’s weakness and encouraging UK data. The UK reported August Nationwide Housing Prices, which rose 11% YoY, beating expectations.

The August Markit Manufacturing PMI was upwardly revised to 60.3, despite “UK manufacturers continued to face rising constraints caused by supply chain issues,” according to the official report. Finally, the UK’s BRC Shop Price Index contracted 0.8% in August, better than the previous -1.2%. The country won’t publish macroeconomic figures on Thursday.

The daily chart for the GBP/USD pair shows that the pair topped around a mildly bullish 200 SMA for a second consecutive day, as the price struggles around a bearish 20 SMA. In the same chart, technical indicators have advanced further within negative levels and are currently challenging their midlines, suggesting an upcoming advance without confirming it.

In the nearer term and according to the 4-hour chart, the pair has limited bullish potential. The pair keeps trading below a flat 200 SMA, providing resistance around 1.3800, although the 20 SMA is crossing above the 100 SMA, both below the current level. The Momentum advances within positive levels but stands below its previous highs, while the RSI is flat at around 57, indicating an absence of buying interest.

EUR/USD recaptures 1.1150 amid US dollar retreat

EUR/USD is trading above 1.1150, rebounding from 19-month lows of 1.1132. The US dollar pulls back from the highest level since July 2020 as global stocks stabilize from post-Fed trauma. Stronger US GDP and policy divergence could keep the rebound elusive ahead of PCE inflation.