The GBP/USD pair built on the previous session's recovery move from the vicinity of the key 1.2500 psychological mark and gained some strong follow-through traction on Wednesday. The initial leg of the uptick was supported by a modest US Dollar weakness, positive trade-related developments and mostly in line UK consumer inflation figures for the month of May. On the UK political front, Boris Johnson won another round of Conservative leadership ballot on Tuesday and received 143 votes, though did little to influence the price action.

Meanwhile, the positive move took along some short-term trading stops placed near the 1.2600 handle, prompting some intraday short-covering move and got an additional boost in the wake of dovish sounding FOMC policy statement. As was widely expected, the Fed left interest rates unchanged on Wednesday but signalled that it was ready to lower interest rates to combat growing global and domestic risks. The US central bank further added that it would "act as appropriate to sustain the expansion”, while the so-called dot-plot indicated that it is unlikely to cut borrowing costs before 2020.

The post-FOMC USD weakness helped the pair to continue scaling higher for the third consecutive session on Thursday. Market participants now look forward to the UK monthly retail sales data for some short-term impetus ahead of the more relevant BoE monetary policy update. The UK central bank is anticipated to maintain status quo amid persistent Brexit uncertainties, turning this to be a rather non-event for the GBP traders. Later during the early North-American session, the US economic docket - featuring the release of Philly Fed Manufacturing Index and the usual initial weekly jobless claims, might influence the USD price dynamics and further collaborate towards producing intraday trading opportunities.

From a technical perspective, the pair has been in a strong recovery mode over the past couple of trading session and the ongoing momentum could further get extended towards 1.2750-60 heavy supply zone. A convincing break through the mentioned barrier might prompt some additional short-covering move and assist the pair to aim towards reclaiming the 1.2800 round figure mark. On the flip side, the 1.2650 region is likely to protect the immediate downside, below which the pair could extend the pullback but now seems more likely to find decent support and defend the 1.2600 round figure mark. 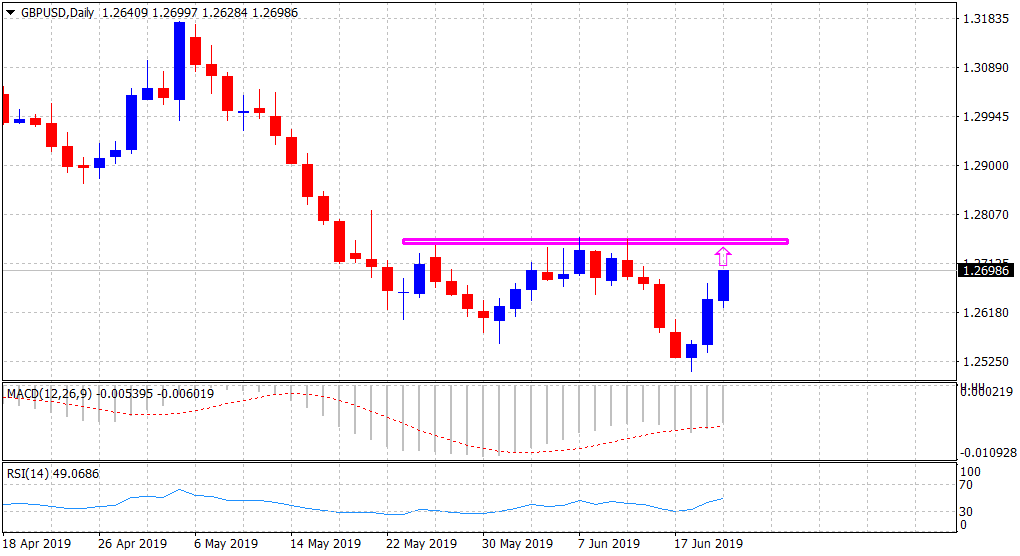