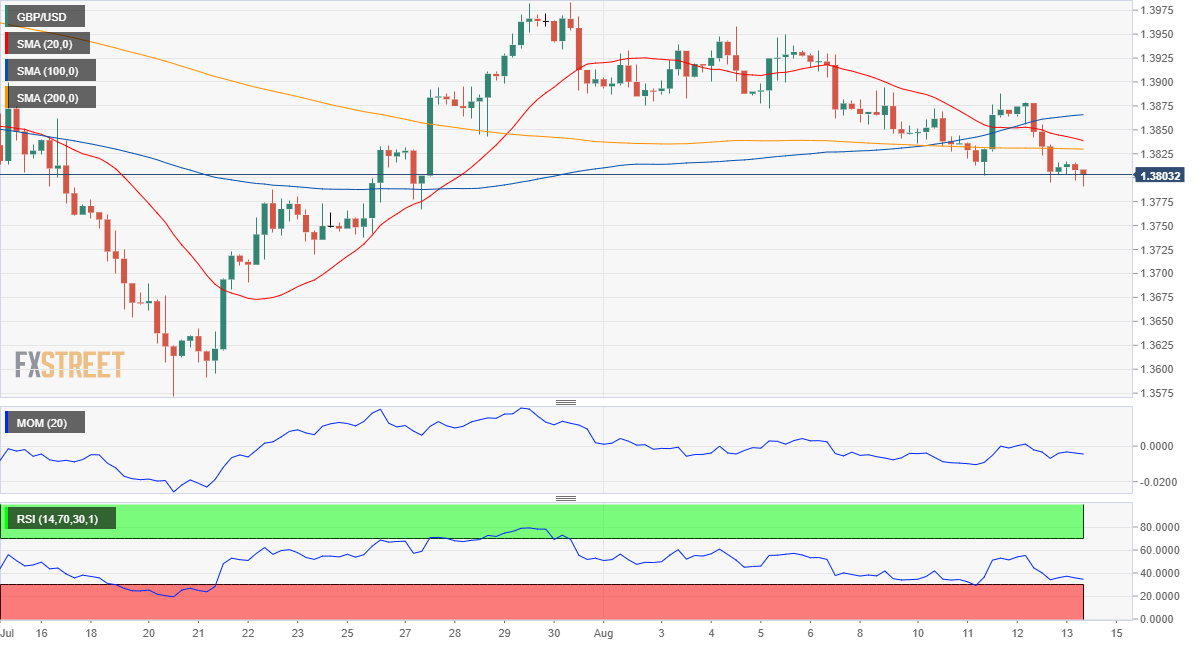 The GBP/USD pair consolidates at the lower end of its weekly range, trading around the 1.3800 level. Major pairs had been lifeless as volatility plummeted following the release of US July inflation, which spur some temporal and limited dollar’s weakness. However, the American currency has recovered most of the ground shed then and trades near weekly highs across the FX board. The pound is its weakest rival, while safe-haven JPY and Gold are the strongest.

Mixed UK data released on Thursday fell short of boosting sterling, despite signs of a firmer economic comeback in the second quarter of the year. The country won’t publish macroeconomic data on Friday, while the US will release the preliminary estimate of the August Michigan Consumer Sentiment Index, expected at 81.2.

The GBP/USD pair is technically bearish and could extend its decline heading into the weekend. The pair posted a lower low at 1.3790, the immediate support level. In the 4-hour chart, the pair develops below all of its moving averages, with the 20 SMA heading firmly south between the longer ones. Technical indicators are directionless but remain within negative levels, reflecting bears’ dominance.

AUD/USD retreating from around 0.7000

The AUD/USD pair hit 0.7008 before retreating, following US stocks’ behavior. Wall Street benefited from easing US government bond yields but ended the day mixed ahead of critical US data.

EURUSD bulls losing the battle around 1.0200

EUR/USD edged higher on Monday, but remains unable to clear the 1.0200 threshold, trading a handful of pips below the figure. The energy crisis in Europe and tensions with Russia undermined demand for the EUR.

Gold advanced on Monday, reaching an intraday high of $1,790.01 a troy ounce during the American afternoon, holding nearby. The greenback gave back the Nonfarm Payrolls report-inspired gains and eased on the back of retreating US government bond yields.

The crypto market shows strength to start the second trading week of August, and key levels have been identified. Although it's still early market, current prices may be the ultimate discount in hindsight.