GBP/USD is subdued in the Wednesday session. Currently, GBP/USD is trading at 1.2737, up 0.10% on the day. On the release front, U.S. inflation numbers for May were soft. CPI slowed to 0.1%, down from 0.3% in the previous release. This matched the estimate. The core reading posted a gain of 0.1% for a fourth straight month, shy of the forecast of 0.2%. There are no major British events. On Thursday, the U.S. releases unemployment claims.

The pound climbed sharply last week, as rate comments from the Federal Reserve sent the U.S. dollar broadly lower. Fed chair Jerome Powell and FOMC member James Bullard both hinted at a rate cut later in the year, surprising the markets with their dovish stance. Since raising rates in December, the Fed has been neutral with regard to the direction of the next rate move, but rising trade tensions have raised fears of a slowdown in the U.S. economy. This has prompted the Fed to reconsider a rate cut later this year. The CME Group has projected a 66% likelihood for a rate cut at the July meeting, up sharply from a month ago, when the odds of a July cut were just 16%. With the May inflation numbers remaining low, there could be more pressure on the Fed to lower interest rates in order to boost economic activity and inflation.

European open – The end of the road 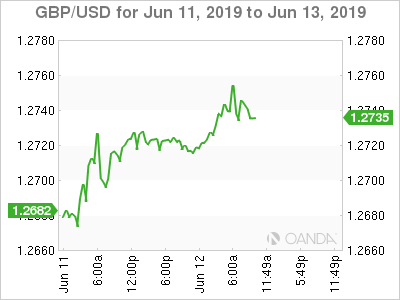 GBP/USD was flat for most of the Asian session. The pair posted slight gains in the European session and has ticked lower in North American trade