On Wednesday morning, the GBP/USD confirmed that it would trade in the borders of the recently discovered channel up pattern. It did so by respecting the lower trend line of the pattern and recovering from it. In theory, the pair should now continue to surge in the pattern's borders until it would reach the upper trend line of the channel.

In the meantime, note that the currency exchange rate passed the support of the hourly simple moving averages, the weekly simple pivot point and the support zone of 1.3800/1.3820. It appeared that these levels were eventually passed despite holding for a short time.

By the middle of the day's trading hours, the rate had reached above the 1.3820 level and was finding resistance in the 100-hour simple moving average near 1.3840. If the rate manages to pass the resistance of the 100-hour SMA, the 55-hour SMA at 1.3857 could provide resistance. If both SMAs fail, the rate could reach for the upper trend line of the pattern. 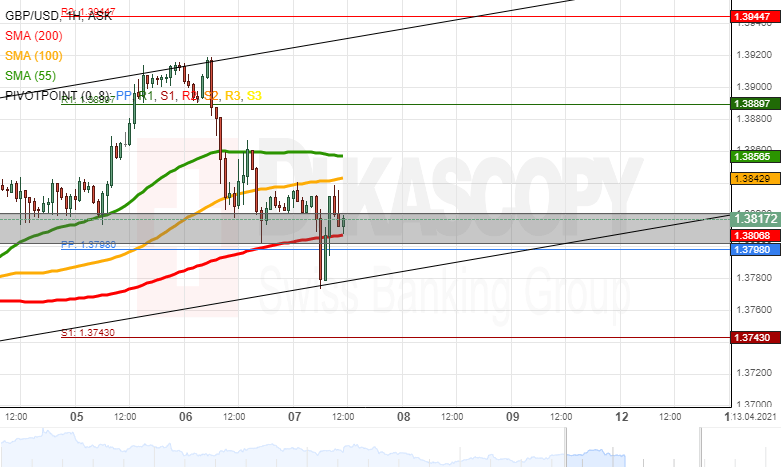 EUR/USD steady above 1.2000 as investors wait for the ECB

EUR/USD is unchanged around 1.2030 for a second consecutive day, as speculative interest holds back ahead of the European Central Bank decision.

XAU/USD bulls gearing up for a move beyond $1,800 mark

An uptick in the US bond yields, modest USD strength capped gold near 100-day EMA. The recent break through the double-bottom neckline resistance favours bullish traders. The XAU/USD seems poised to surpass the $1,800 mark and test the $1,815-16 barrier.