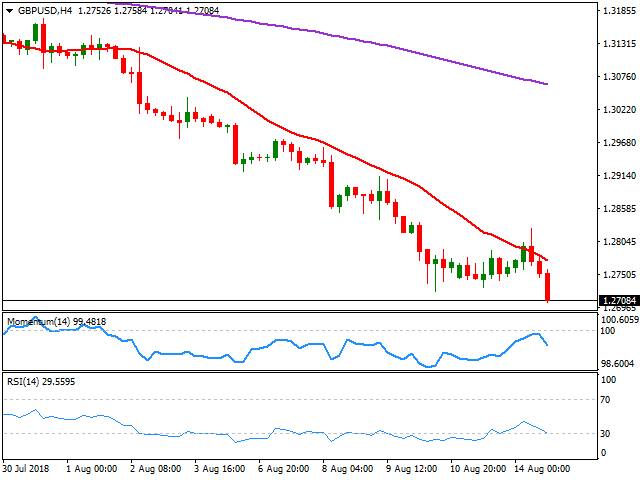 The GBP/USD pair peaked at 1.2826 following the release of UK employment data, as the unemployment rate fell to 4.0% in June, the lowest level in 43 years. Nevertheless, the rest of the report was not that encouraging, as the number of people unemployed increased by 6.2K, surpassing the market's expectations of 3.8K. Furthermore, wages' growth missed the markets' forecasts, as average earnings including bonus increased by 2.4% in the three months to June, below the previous 2.5%, while excluding bonus wages were up by 2.7% as expected. Broad dollar's strength prevented the pair from holding on to gains, with the decline then exacerbated by headlines related to a no-deal Brexit, as British foreign minister Jeremy Hunt said that "everyone needs to prepare for the possibility of a chaotic no-deal Brexit,” adding that the risk of such happening has been increasing recently. UK July inflation will be out this Wednesday, with monthly CPI seen flat, and up by 2.5% when compared to a year earlier. The pair plunged to flirt with the 1.2700 figure late US afternoon and settled not far above it, looking poised to extend its decline in the upcoming sessions, as in the 4 hours chart, technical indicators resumed their declines, the Momentum after failing to re-enter positive territory, and the RSI now heading south around 30. The same chart shows a failed attempt to recover above a bearish 20 SMA, which maintains its sharp bearish slope.