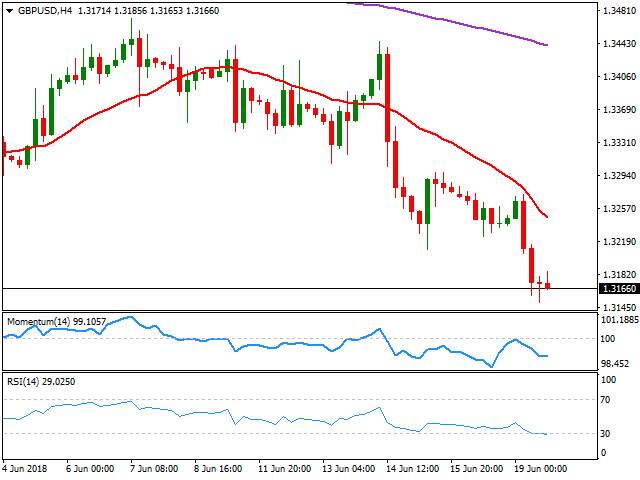 The GBP/USD pair fell to a fresh 2018 low of 1.3150, holding nearby all through the day, as the Pound was not only hurt by investors dumping high-yielding assets, but also by Brexit-related headlines. EU´s Barnier was on the wires early European session, saying that the UK needs more realism on what's possible after Brexit, while later on the day, draft conclusions from June EU summit showed that "no substantial progress" was made on the Irish border issue, warning that member states need to be prepared "for all outcomes," which translated to a more simple language means be ready for a no-deal. The UK macroeconomic calendar had nothing of relevance to offer, and will remain light this Wednesday, as the only figure scheduled is the CBI Industrial Trends Orders for June, expected at 1 from the previous -3. Technically, the bearish bias remains strong according to readings in the 4 hours chart, as the pair plunged after failing to recover above its 20 SMA, now heading south almost vertically around 1.3245, while technical indicators have decelerated their declines but hold near their daily lows. Further declines below the daily low will open doors for a steeper decline, with speculative interest then eyeing a test of the 1.3000 level.