EUR/GBP broke through our quarter-end target of 0.91. We see more downside to sterling and expect EUR/GBP to trade above 0.92 this summer. As UK-EU negotiations are unlikely to progress, more risk premium can be priced into GBP. We also note the structural change in GBP sensitivity to risk post Brexit referendum.

GBP remains the biggest G10 FX underperformer- the worst performing G10 currency both this month and this quarter and EUR/GBP has reached our quarter-end target 0.91.

Here we review various GBP drivers, gauge what is priced in and conclude that more downside still lies ahead for GBP. We expect EUR/GBP to reach and breach the 0.9200 level this summer.

Prime minister Boris Johnson’s speech today does not alter much GBP prospects as (a) the infrastructure spending was expected, as was outlined in the March budget, (b) the UK-EU trade negotiations remain the key driving factor behind GBP.

Risk premium present but not extreme yet

This contrasts with the state of affairs in mid-May when we viewed the market as inadequately pricing in the uncertainty related to the UK-EU trade outlook (see GBP: Market too complacent on transition risk). While the GBP risk premium has risen since then (it's currently worth around 4% vs no risk premium priced in at the time) it still remains below the levels observed in August 2019, during the heightened uncertainty over the Brexit outlook (the GBP risk premium exceeded 5% back then).

As the UK government refused to request the extension of the transition period and the form of the UK-EU trade deal (if there is one) remains uncertain, there is scope for meaningful GBP risk premium to increase further, to the levels seen in August last year.

Hence, our forecast for further GBP weakness and EUR/GBP breaching the 0.92 level this summer, consistent with an additional 1% rise in the risk premium.

Limited reasons to price out the possibility of BoE negative rates

As the outlook for the UK-EU trade negotiations - the main driver of GBP - remains veiled in uncertainty, there is little scope for the market to priced out the non-negligible odds of the Bank of England negative interest rates.

As Figure 2 shows, the market is pricing in the policy rate below zero in early next year. Unless the UK-EU trade negotiations surprise on the upside (which is unlikely in summer months), there will be little impetus for the market to change the probability distribution of the negative rates outcome. This, in turn, means limited room for a GBP rally. 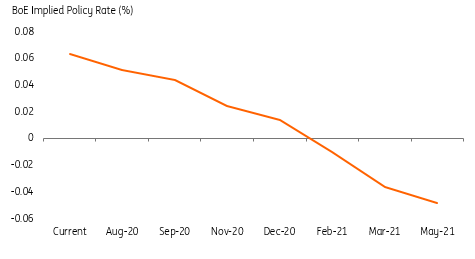 Market is short sterling, but not excessively

Given the overriding importance of the UK-EU trade negotiations as an idiosyncratic GBP driver, the possible negative outcome from the trade negotiations would likely lead to an increase in short positioning, which is by no means stretched by historical standards. 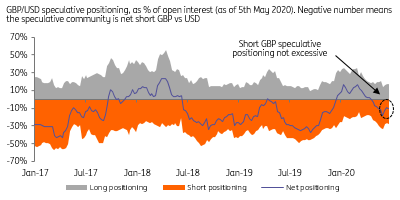 No material signs of stress in the option market

The options market does not appear to show any material signs of stress.

The EUR/GBP implied volatility term structure is ordinarily upward sloping (Figure 4), with limited kinks visible in the term structure. This suggests the market does not appear to pencil in the negative outcome with a meaningful probability, in turn increasing the potential for more meaningful GBP weakness if UK-EU trade negotiations fail.

Figure 4: The GBP option market not showing signs of stress 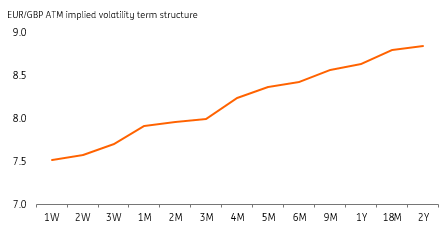 The importance of Brexit as a driver of GBP is clearly seen in the altered sterling correlation with risk (gauged by MSC world).

While sterling (vs the euro) is currently three times more sensitive to falling markets vs rising markets (meaning that GBP suffers proportionally more in falling markets than it benefits in rising markets), prior to the Brexit referendum the difference in sensitivities was even more (as Figure 5 shows). This explains why GBP has not fully benefited from the rallying global stock markets this quarter.

In our view, the Brexit factor shifted the positive spillovers from the global drivers into sterling further into the background. 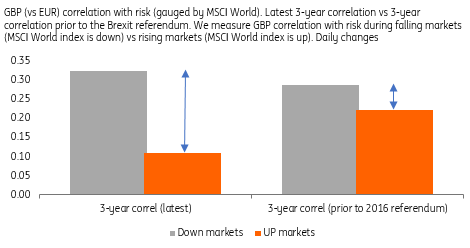 Overall, while some risk premium is evident in sterling (more so in the spot market than in the options market), more can be priced in if the uncertainty about the outcome of the UK-EU trade negotiations prevail / the outlook deteriorates. This means EUR/GBP is likely to push through the 0.9200 level this summer, with clear upside risks. While we expect some form of a UK-EU trade deal to be agreed by October this year (and GBP to recovery by year-end), a high degree of uncertainty prevails and we prefer to focus on the near-term outlook – which we view as GBP negative.

For EUR/GBP to reach the 0.95 level, what we would need to see is in our view either (a) a sharp rise of the uncertainty about the future of the UK-EU trade relationship, or (b) another collapse in global risk assets (as we have seen in March), which would make GBP vulnerable, or (c) the Bank of England embarking on negative rates.

At this point, none of the above are our base case, hence our call for EUR/GBP trading around 0.92 this summer