The Dollar bloc currencies have lifted amid a cautious risk-on vibe in Asia, led by a rally on Chinese stock markets. AUDJPY was showing a gain of about 0.5% as it printed a nine-day high at 72.81, while AUDUSD rallied to around the 0.6750 mark from the low 0.67s. USDCAD retreated to the lower 1.3300s after posting a one-week high at 1.3345.

Both the Dollar and Yen have been trading softer, which has nudged EURUSD above 1.1000 for the first time in two weeks, with intra-day Oscillators  in over bought territory over S2 at 1.1012, next resistance sits at an ambitious S3 and 1.1025.  Investors appear to be giving out hope that both the US and China are ready to strike a partial trade deal out of self-interest pragmatism, despite openly hostile relations between the two, which has been a recipe for some mixed messaging from both Washington and Beijing.

Skittishness still hangs in the air, however, partly amid a nervousness that the US, UK and Eurozone economies might be headed for recession. Reflecting this, bullion-backed ETFs have now posted a 17 consecutive day rise in demand, the longest run of inflows since the financial crisis in 2008-9, with total gold ETF holdings now at record levels.

On the Brexit front, UK Prime Minister Johnson will meet his Irish counterpart later today, which the media has tagged as a last-ditch attempt to reach a compromise on the Irish border issue, though more likely it is a stage for both to put on a show that there are doing all they can, given the intractable reality of their respective positions. Johnson yesterday pledged that he would not seek to make a no-deal Brexit the official party position heading into the upcoming election (date TBA).

Bigger picture, EURUSD has been in a clear bear trend since early 2018, and certainly all of 2019, descending from levels above 1.2500 over this extended time period. Last Monday’s 28-month low at 1.0880 marked a reaffirmation of this trend. More of the same seems likely. 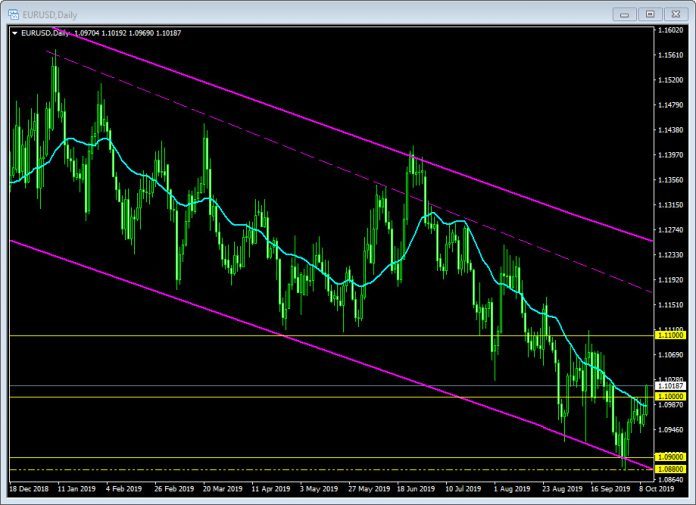