CFTC positioning data as of 18 August highlight a lingering bearish sentiment on the USD, whose net positioning remains around 8-year lows. The main contributor in terms of weight to the aggregate USD positioning – the EUR – saw its positioning unchanged in the week 12-18 Aug, at +28% of open interest and close to the upper bound of its 5-year band.

EUR/USD has been facing some downward correction after an extended rally, but we continue to see the pair’s fundamental drivers pointing at further strengthening and we, therefore, keep our 1-month target at 1.20.

Looking ahead, positioning itself appears to be the most tangible factor able to potentially curb further upside in EUR/USD as it now appears quite overstretched into overbought territory.

GBP: The end of the positioning “advantage"

Sterling’s net positions jumped to a 5-month high, moving into net longer territory (+3% of open interest) in the week ending 18 August. The move in positioning is hardly surprising considering the recent good performance of GBP positioning: actually, the jump in net positioning appears to be lagging the move in spot by a few weeks.

GBP positioning is a good indication of how investors are currently keeping a highly complacent approach to the Brexit story. While the collapse of Brexit negotiations late last week will only be mirrored in next week’s CFTC positioning report – and we may see the rebuild of some GBP shorts – sterling’s positioning is still far from the levels it hovered around when markets were pricing in a no-deal Brexit (as shown in the chart below). 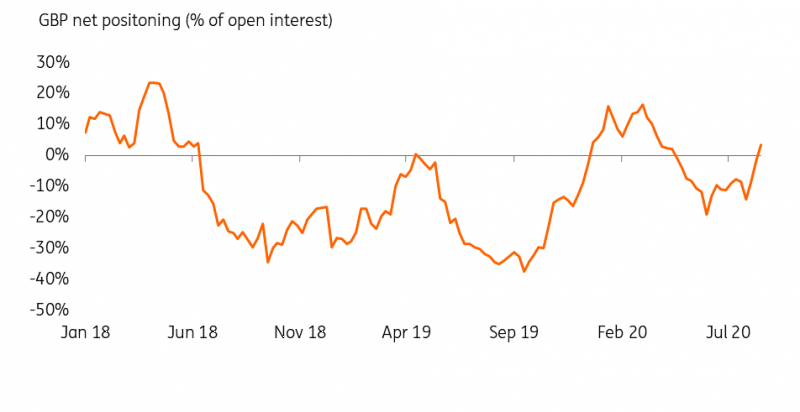 In our view, this continues to highlight how GBP is underpricing the risk of a no-deal outcome of current UK-EU trade negotiations, which in turn flags a non-negligible risk of more stress being built into sterling in the coming weeks.

NZD: The big jump in positioning is hard to explain

In the rest of G10, the low yielders JPY and CHF positioning dropped by approximately 4% of open interest, likely on the back of additional signs of resilience in global equity markets. Still, both currencies remain into deep overbought territory.

The most noteworthy move in the week under analysis was registered in NZD positioning, that jumped by 10% of open interest (from a perfectly neutral positioning level) without being followed by its procyclical peers AUD (which was flat) and CAD (which actually dropped).

In a moment where the RBNZ is intensively discussing the possibility of a leap into negative rates and investors are effectively starting to price more cuts from the Bank, it is hard to explain such a jump in investor sentiment around NZD. Incidentally, the resurgence of Covid-19 cases in New Zealand has seen Auckland go into a lockdown. All this has contributed to making NZD a laggard in G10 over the past few weeks.

Without speculating on what might have caused the jump in NZD positioning, we will wait for next week’s CFTC report to see if the move is already reversed. CFTC G10 positioning has shown signs of increased volatility since the start of the pandemic (the large swings in CHF positioning being a case in point), and some movements are hard to connect to actual changes in the currencies’ fundamentals.