As we noted in yesterday’s FOMC Preview report, the US central bank was never going to make any immediate changes to policy, leaving traders to read Powell and Company’s tea leaves for implications about future tweaks. As it turns out, the tea leaves were clear: The Fed has undergone a major dovish shift.

Even relative to the market’s dovish expectations, the FOMC came off as worried about the US economy:

All of these tweaks signal that the central bank is concerned about the US economy and traders have taken notice. According to the CME’s FedWatch tool, the market is pricing in nearly a 40% chance of a rate cut this year, up from around 25% yesterday. Given the scope of the Fed’s negative revisions, we wouldn’t be surprised to see this number rise further in the coming days. 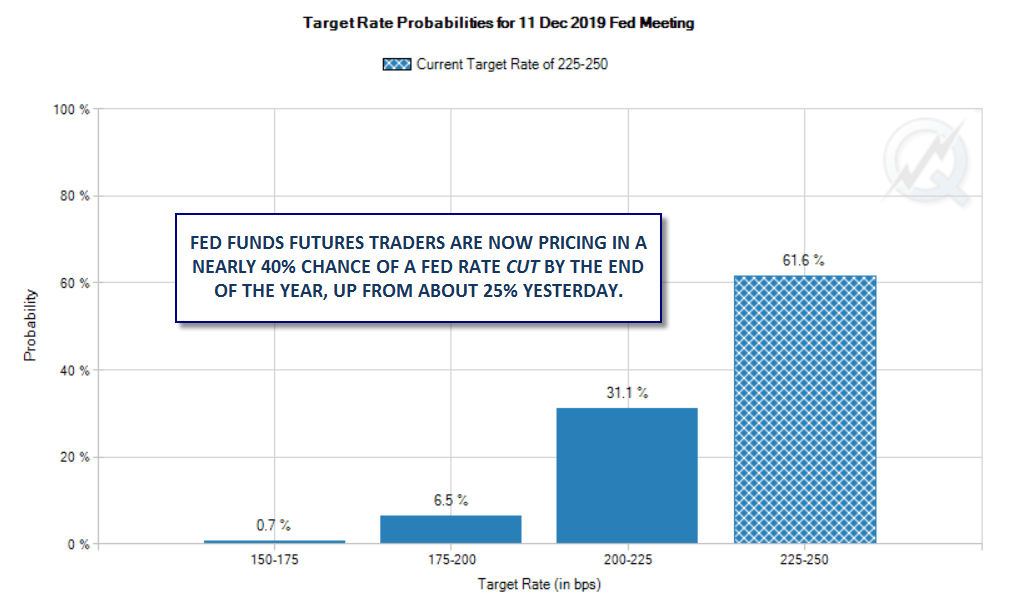 Not surprisingly, the big shift in the market’s outlook about Fed policy is also being felt in more traditional markets. The US dollar has fallen by at least 60 pips against all its major rivals, with the US dollar index shedding -0.60% as of writing. Gold and oil have caught a bid on the weakness in the greenback, while major US stock indices have recovered into positive territory on the prospect for lower interest rates in the future.

The biggest move has been in the bond market: The 10-year US Treasury yield is dropping a full 9bps on the day to 2.53%; a close here would mark the largest single-day rally in bonds (fall in yields) since last May. Meanwhile, the 2-year Treasury bond is trading off by 8bps itself to yield just 2.40%.

While we believe that economic data in the coming months may show that the Fed’s dramatic shift is an overreaction, we wouldn’t be surprised to see continued weakness in the buck, strength in stocks/commodities, and further drops in yields while the market “catches up” to the central bank’s new posture.

EUR/USD has dropped below 1.17, to the lowest since late September. The ECB expressed concern about the spread of covid and signaled more stimulus in December. Earlier, US GDP beat estimates. The US elections are eyed.

US GDP Quick Analysis: No V-shaped recovery despite 33.1% leap, covid looms over markets

The best quarter in history – following the worst one. Gross Domestic Product jumped by an annualized rate of 33.1%, above expectations. That included a surge of 40.7% in personal consumption, a core component of the economy.