As the Federal Reserve prepares for its final monetary policy gathering of 2016, it will look back on a year of inactivity and look forward to a year that could very well be an active one. The outcome of the December meeting seems a foregone conclusion: short-term interest rates will almost certainly be increased by 25 basis points. For weeks, though, attention has turned from this month’s decision to what path the Fed might take in 2017.

The economic landscape has changed considerably since September, the last time the FOMC published forecasts and the last time that Fed Chairwoman Janet Yellen conducted a press conference. Updates by both will be offered next Wednesday afternoon. Embedded in the communications will be refreshed impressions of the current situation and expectations of how policy makers elsewhere in Washington might affect the outlook.

Here is our take on the likely content of next week’s conversations.

The U.S. economy is enjoying a fairly strong close to 2016. Early estimates for fourth quarter growth are running at about 2.6% (on an annualized basis).

These retrospective readings don’t include any allowance for the potential tailwinds that may arise in the wake of the U.S. election. Gains in the equity markets (which have been up nearly 8% since the beginning of November) and business confidence (the U.S. Purchasing Manager’s Index is at its 2016 high) may buoy activity in the quarters ahead.

Legislatively, the new crowd in Washington seems intent on tax reductions, deregulation and additional infrastructure spending. All of that would be accretive to growth, at least in the short term. (If the measures add meaningfully to the national debt, the benefit would eventually be diminished by higher interest rates or the need for higher taxes.) The contours of these programs are still under discussion, and their impact may not be fully felt until very late in 2017. Nonetheless, prospects suggest that economic growth will accelerate somewhat in the quarters ahead. With the fiscal side stepping forward, monetary policy can step aside.

Readings on U.S. employment are very much open to alternative interpretations, as we discussed in our piece entitled “The Two Faces of the American Labor Market.” As shown in the charts below, the likelihood of being unemployed or out of the labor force rises considerably for those with only modest levels of education. This is a structural challenge that is difficult for the Fed to address. 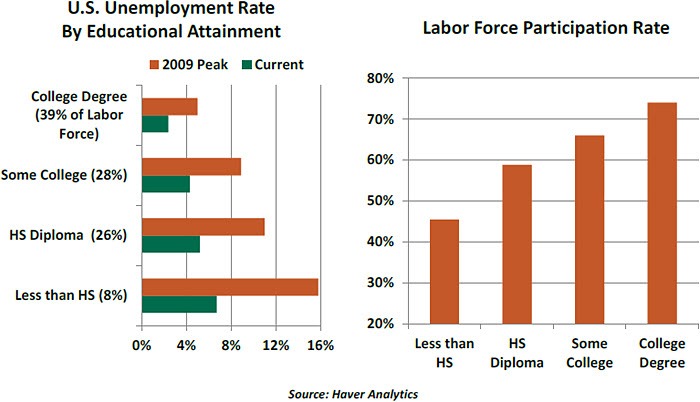 The wage picture remains a puzzle. Despite a dwindling supply of labor in some industries and at some skill levels, gains over the past year have been just 2.5%. The peak rate of pay increases during the last U.S. expansion was 3.5%. The Labor Department’s Employment Cost Index shows a similar trend.

In sum, the United States has moved considerably closer to full employment over the past year. The remaining gap represents populations whose skill sets may be more modest. The Fed can try to reach this group by allowing the economy to run “hot,” but fiscal measure would be much more targeted. There is no need to delay policy normalization on account of the labor market.

Inflation risk is back in the headlines. Consider:

1. The core of OPEC has agreed to supply reductions. While the accord may not hold, oil prices have risen by about $9 fper barrel in the past month. The prices of other commodities have also increased with the prospect of heightened infrastructure spending.

2. Any action taken by the new administration to restrict trade will raise import prices and offer shelter to domestic producers to raise their prices as well.

3. More rigorous enforcement of border control, or moves to deport undocumented workers, will limit the supply of migrant labor and potentially raise wages and prices in some sectors.

4. Modifications to the Affordable Care Act may serve to reduce discipline on health care costs, which are already increasing at a more significant rate.

5. Higher levels of economic growth at a time when sections of the labor market are near full employment would put further upward pressure on wages. 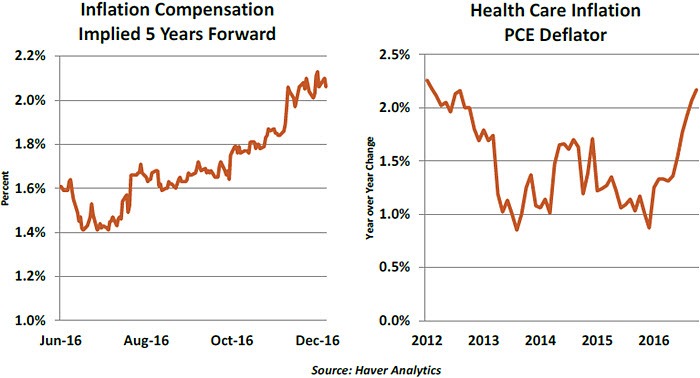 Based on all of these factors, the market’s assessment of prospective inflation has risen importantly over the past six months, and significantly since the U.S. election. Expectations are a powerful contributor to actual inflation, so this could be a harbinger of more rapid increases in the price level. Forecast surveys covering inflation have shown some upward movements, but they have been modest.

One of the challenges in forecasting inflation is anticipating the Fed’s reaction function. We’ve raised our expectations for inflation only slightly, based on the assumption that the U.S. central bank will continue to exercise the same vigilance it has for the past 35 years. This is no time to compromise on central bank independence.

In sum, inflation risks seem to be more significant than they were three months ago. But their ultimate realization will depend greatly on the policy choices made early next year.

For most of 2016, the Fed had a hyper-sensitivity to any international development that looked threatening. That is the chief reason that no action has been taken for the year to date. But the tone may be changing: more Fed officials are citing concerns about asset prices. 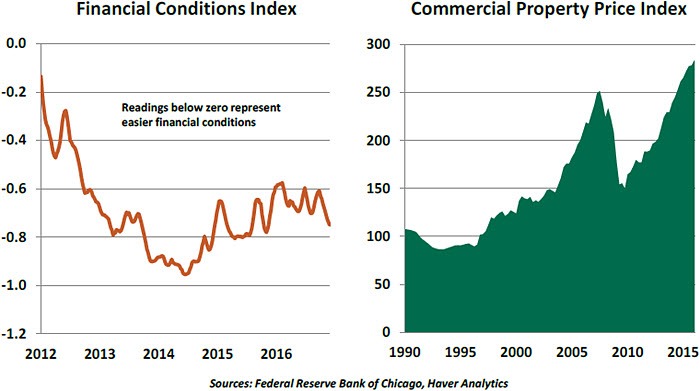 The property markets are one example. Both residential and commercial property prices now exceed the highs recorded prior to the 2008 financial crisis. Evidence suggests that investor demand is a main driver of these trends. Higher rates would curb the enthusiasm.

On the other side, higher rates increase the challenge of debt sustainability for households and governments. The Federal budget deficit seems poised to grow in the years ahead, and its sensitivity to rising interest costs will grow commensurately. If fiscal expansion does not produce growth in sufficient amounts to offset rising carrying costs, the national debt will increase.

Taking this all into account, we expect the Fed to pair its tightening decision with dovish language. Given multiple uncertainties surrounding the outlook as well as the sensitivity of debtors to higher rates, the Fed will continue to move carefully. Strategy going forward will continue to be data-dependent.

Given our current forecast, we expect two rate increases in 2017: one at mid-year and one at year-end. But in our minds, and in the minds of the markets, rates could well rise more than anticipated. Taylor rules suggest it, and futures markets are implying it. 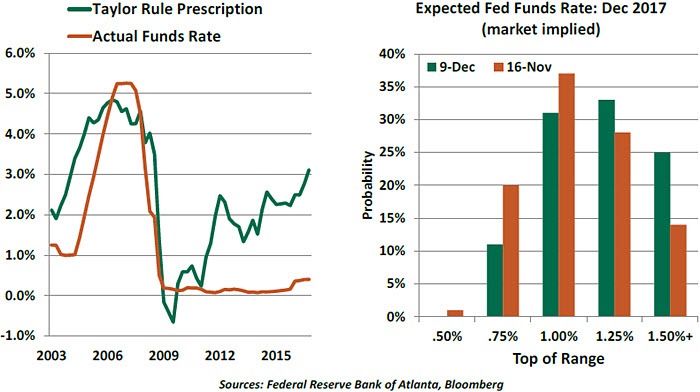 The Fed’s Summary of Economic Projections, which will accompany the FOMC statement, will be a trove of interesting information. What are the Fed’s expectations about growth and inflation in the wake of the election outcome? What will median expectations of the funds rate look like? How much dispersion of opinion will there be? Will any FOMC members dissent from the decision, potentially favoring a larger interest rate increase?

Janet Yellen will have to be at her diplomatic best during her press conference. She will undoubtedly be asked to comment on fiscal proposals, an area she traditionally avoids. She will also likely be asked about the prospect of new appointments to the Fed’s Board of Governors, or new pressures from the U.S. Congress. I don’t envy her.

We’ll recap the outcomes of the meeting next week.