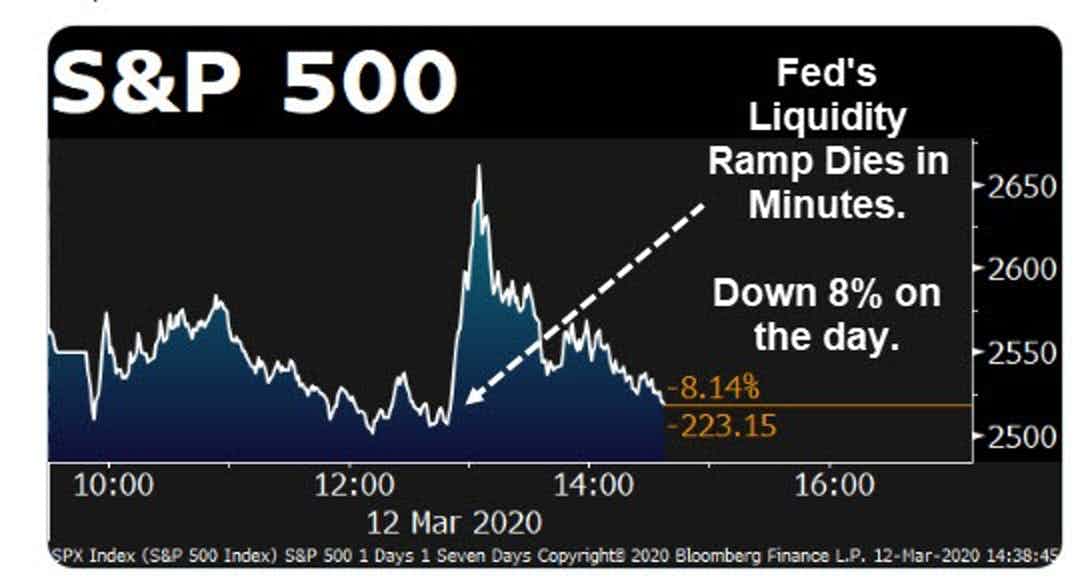 Although Fed stepped up to the plate today with $1.5 trillion in emergency liquidity, the market continued to dive.

The Federal Reserve said it would inject more than $1.5 trillion of temporary liquidity into Wall Street on Thursday and Friday to prevent ominous trading conditions from creating a sharper economic contraction.

“These changes are being made to address highly unusual disruptions in Treasury financing markets associated with the coronavirus outbreak,” the New York Fed said in a statement on Thursday

The New York Fed said it would conduct three additional repo offerings worth an additional $1.5 trillion this week, with two separate $500 billion offerings that will last for three months and a third that will mature in one month.

If the transactions are fully subscribed, they would swell the central bank’s $4.2 trillion asset portfolio by more than 35%.

Yet Another Round of QE

The Fed can label this however they want, but it's another round of QE.

Bear Market Across the Board

The S&P 500 shed more than 7% shortly after the opening bell, plunging the index into bear market territory and triggering a 15-minute halt in trading. The drop marked the second time this week that a rarely-used circuit breaker was triggered.

On Wall Street, companies and exchanges are making contingency plans. The Chicago trading floor of CME Group said it would close at the end of Friday to preemptively avoid the spread of the virus. The New York Stock Exchange is also preparing a contingency plan in case it needs to close its iconic trading floor.

Some investors were disappointed Mr. Trump didn’t clearly articulate details of how he planned to get an economic stimulus package through Congress and the lack of coordination between the federal government and the Federal Reserve.

“What you really need is confidence building,” said Hani Redha, a London-based multiasset portfolio manager at PineBridge Investments. “That comes from giving detailed communication to the market about what they’re seeing and doing to develop the sense there’s a comprehensive approach.”

Last night President Trump addressed the nation. It was a terrible performance in which he blamed the EU and praised his own actions. There was no empathy for Italy. His own assurances as recently as a week ago that the coronavirus was no big deal can now readily be seen as lies.

If you wish to see his 10 minute speech, the above link posts the full video.

This morning, I commented Economic Reports are Meaningless Now

I now have the perfect example: Calculated Risk reports Fed's Flow of Funds: Household Net Worth Increased in Q4

How meaningless is that?

The second quarter of 2020 rates to be a doozie.

Here Is What Was Behind Yesterday's Unprecedented Treasury Dislocation

ZeroHedge has an interesting report on dislocations.

Please consider Here Is What Was Behind Yesterday's Unprecedented Treasury Dislocation

Ooops. It's too late for that.

In fact, Fed policy is responsible for these disruptions through its inflationary tactics that create bubbles.

As noted previously, a Very Deflationary Outcome Has Begun: Blame the Fed

Gold seesaws between gains and losses this Thursday, although holding near the lower end of its weekly range. XAU spiked early in the US session to post a daily high of $1,853.5, currently trading at around $1,847.