It’s a testament to the success of the Federal Reserve’s post-crisis “Communication-as-a-Policy-Tool” philosophy that investors have “known” the outcome of this week’s Fed meeting (and likely the November and December Fed meetings as well) for weeks already.

It’s essentially a certainty that the central bank will raise interest rates by 25bps at the conclusion of tomorrow’s meeting, and that outcome has been completely discounted by the traders, meaning it won’t lead to a much of a market reaction in and of itself. Fed Chair Jerome Powell and Company are also likely to leave the door open to an interest rate hike in December, without pre-committing to any action.

With the near-term outlook for monetary policy essentially “in the bag,” markets will key in on the Fed’s longer-term economic projections. Specifically, traders will be watching the Fed’s infamous “dot plot” of interest rate expectations to see if the median Fed member raises his/her expectation from the current three interest rate increases expected in 2019. In our opinion, the FOMC will lean toward a more cautious, wait-and-see approach toward rates in 2019, especially as trade tensions between the US and major partners including China show no signs of resolving any time soon.

Looking beyond just next year, the central bank will also release economic projections through 2021 for the first time. With interest rates expected to reach the central bank’s “longer-run” neutral rate as soon as next year, it will be interesting to see how the Fed sees economic growth and inflation developing once the impact of last December’s tax cuts has faded.

Another noteworthy development will come from the FOMC statement. As we noted in our recap to last month’s FOMC meeting, the central bank made only minor revisions to its statement last time around, though some analysts believe that the central bank will tone down its characterization of current monetary policy. One prediction is that the long-included statement about monetary policy remaining “accommodative” will be revised to state that “monetary policy remains somewhat accommodative.” While such a change seems relatively innocuous, it could signal that the Fed sees an end to its consistent interest rate hikes on the horizon.

Finally, Fed Chair Powell’s press conference with Congress will likely be focused on tariffs and trade issues. If Powell sounds more hesitant and concerned about the impact of the latest import taxes on economic growth, we could see a bearish reaction in the US dollar and a bullish move in US stocks.

Heading into tomorrow’s release, the US dollar index is still consolidating near the neckline of the head-and-shoulders pattern we highlighted two weeks ago. A break below last week’s low at 93.81 could confirm the pattern and open the door for a drop toward the 50% or 61.8% Fibonacci retracements at 93.11 and 92.19 respectively. Meanwhile, a rally through the near-term bearish trend line around 94.50 could herald another leg higher for the greenback, with initial resistance emerging at around 95.70. 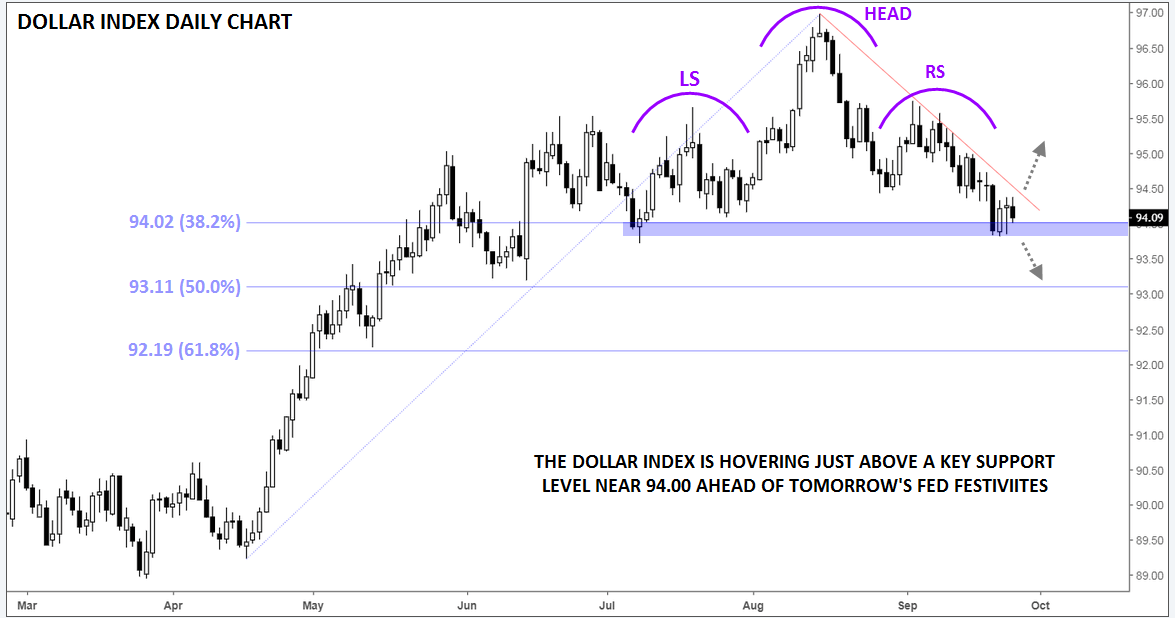