Winter has come – it is darker than thought – but spring is also on its way. Will the Federal Reserve focus on the gloomy economic deterioration or remain upbeat about the near future and even warn about excesses? The answer is set to rock all markets.

Here are three scenarios for the Fed's first decision of 2021.

The bank is set to leave the interest rate unchanged near zero and also maintain its bond-buying plan at around $120 billion/month, as Federal Reserve Jerome Powell signaled in recent appearances. He may also refuse to provide any hints about changes to the policy, sticking to a conditional script.

In this scenario – which has the highest probability – stocks may edge lower after their recent gains and the dollar is unlikely to make any substantial waves. Nevertheless, Powell may provide hints towards Thursday's growth figures.

If the Fed Chair says that recent data was somewhat disappointing, investors may conclude that Gross Domestic Product data for the fourth quarter missed estimates. Retail Sales, Unemployment Claims, and Nonfarm Payrolls all missed estimates. The latter figure showed the first squeeze in the labor market since the spring, and the Fed may be worried that it could fall short of its employment mandate.

If Powell says that the current weakness – a result of the virus's resurgence in the autumn and winter – was as expected, traders can expect GDP to meet or even beat estimates.

The financial press has recently highlighted retail traders' feverish stocking of several shares such as Gamestop, Churchill and others. There are also fears about exuberant valuations of more established companies such as Tesla or even frothy valuations of tech giants. The pandemic has brought equity trading to the forefront.

While the Fed statement is unlikely to address the stock market, reporters are likely to ask Powell about his thoughts and if he shows some concerns, markets could suffer. It would serve as a hint that the Fed will not always be there to support "favorable financial conditions". By pinching holes in markets, the Fed may be preventing a potential bubble.

As the generosity of central banks is the critical driver of shares, any hint that the Fed is unwilling to continue printing money in fear of bubbles would send them down. The safe-haven dollar would greatly benefit in such a scenario. The greenback has been unable to stage a meaningful recovery and a hint from the Fed could set the spark for a rush to the "king of cash."

The Fed added some $3 trillion to its balance sheet in 2020: 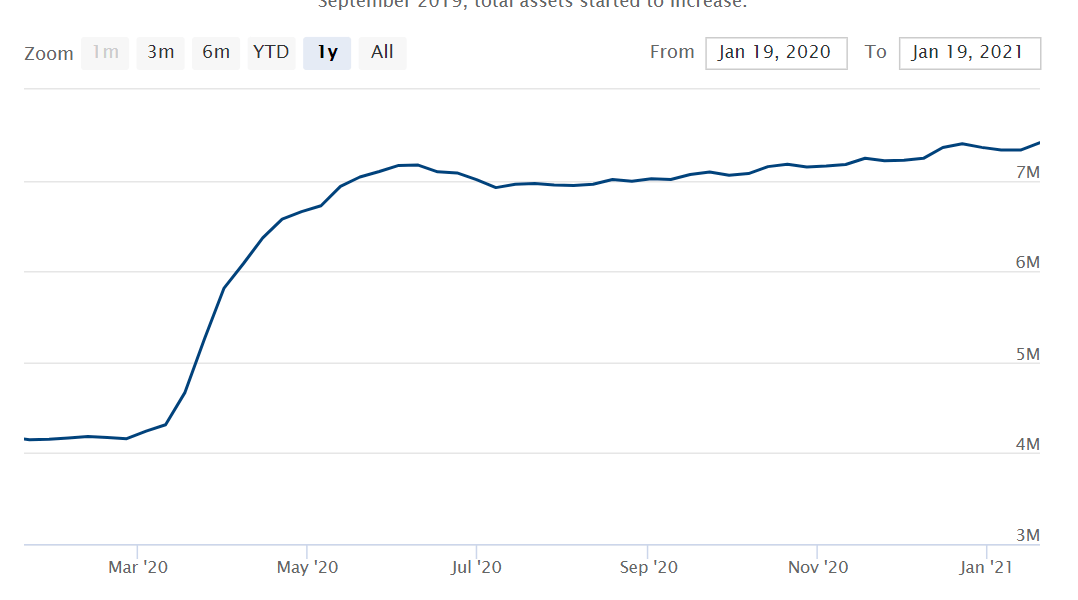 Such a scenario would also be backed up by the hope that COVID-19 vaccines would enable a robust recovery in the second half of 2021 – something the Fed has been consistent in predicting.

President Joe Biden is pushing for a $1.9 trillion stimulus package. While he publically said that he is ready to negotiate, he is also aware of the high price and conveyed a sense of urgency – hinting that Democrats could go it alone.

Even if the final coronavirus relief package is worth only $1.5 trillion, the government will need to find funding for this extra debt. Is there enough money in markets to scoop up Treasuries? The Federal Reserve may be able to end any doubts by indirectly committing to scooping up a significant chunk of freshly auctioned bonds.

Powell is unlikely to say that directly, but he could hint that a substantial increase in bond yields – a result of high debt issuance – will not be tolerated. So far, the bank has seen the increase of ten-year yields above 1% as a bullish sign for the economy. However, at some point, long-term interest rates would make financial conditions unfavorable.

By keeping the door open for increasing the Fed's bond-buying scheme, equities would react positively to the Fed – and so would gold. The safe-haven dollar would suffer another sell-off amid prospects that the newly minted greenback would flow outside the US in search of riskier assets.

While the world's most powerful central bank is set to leave its policy unchanged, it can undoubtedly rock markets by signaling its next changes in its bond-buying scheme.