The evolution of the Federal Reserve’s interest rate policy has been as swift as the rise of the inflation it is belatedly designed to counter.

Through the spring, summer and into the fall, Fed officials were reassuring markets that the steadily rising inflation was temporary. As late as the November 3 Federal Open Market committee (FOMC) statement, inflation was still “expected to be transitory’ in the bank assessment.

It was not two weeks ago, on November 30, that Fed Chair Jerome Powell, speaking in the Senate, suggested that it was time to stop referring to the inflation stalking the US economy as transitory.

“I think its–it’s probably a good time to retire that word and try to explain more clearly what we mean,” Mr. Powell said. In his opening remarks, the Fed Chair had noted that “it now appears that factors pushing inflation upward will linger well into next year.”

This FOMC decision is more complicated than most and has three parts: Fed funds rate, the taper amount and the economic and rate projections for next year and beyond.

This is the simplest. The Fed governors are not expected to increase the US base rate which has been at a 0.25% upper target since March 2020. Until the original $120 billion a month in bond purchases, reduced by $15 billion in November, is ended, the Fed, by its own admission, will not alter the fed funds rate.

The end, or at least the beginning of the end of the emergency bond purchase program, which the Fed has used to keep Treasury and commercial rates near the bottom of their historical range, has been anticipated since the start of the year. In the first quarter Treasury rates climbed to a peak on March 31, in expectation that the recovering economy would prompt the Fed to begin its reductions.

Various factors, including a revival of the pandemic and fitful job growth, prevented the Fed from initiating its withdrawal and the bank continued buying $80 billion a month of US Treasuries and $40 billion of mortgage back securities.

At the November 3 FOMC meeting, after several weeks of hints and suggestions from Mr. Powell and several other Fed presidents, the bond program was cut by $15 billion a month, beginning then.

Since that meeting on November 3, when the Consumer Price Index (CPI) for September was known to be 5.4% annually and the Core Personal Consumption Expenditure Price Index (PCE) was 3.7%, inflation has accelerated dramatically.

The Producer Price Index (PPI), an indicator of inflation in the manufacturing pipeline and future consumer price increases, registered a second month at 8.6% in October. November's result was forecast to be 9.2% , instead it came in at 9.6% and October was revised to 8.8%.

This sharp increase in the inflation rate, which is higher for many consumer staples and much higher for gasoline, has convinced the governors to at least double the monthly reduction to $30 billion. With $105 billion in monthly purchases remaining, this would end the bond program in mid-March, clearing the way for an initial hike in the fed funds rate potentially at the March 16 FOMC meeting.

The Fed issues quarterly economic and interest rate projections. The last set for 2021 is out on Wednesday.

September’s Projections Materials are below. The important changes in the September release were the addition of one fed funds hike in 2022, in June there was none, the increase in the PCE inflation rate to 4.2% from 3.4% and the core rate to 3.7% from 3.0%. Both of those PCE rate projections for the year end have already been surpassed. The core rate was 4.1% in October as above and the overall rate was 5.0%. Inflation in 2022 was forecast to be 2.2% in headline and 2.3% in core. 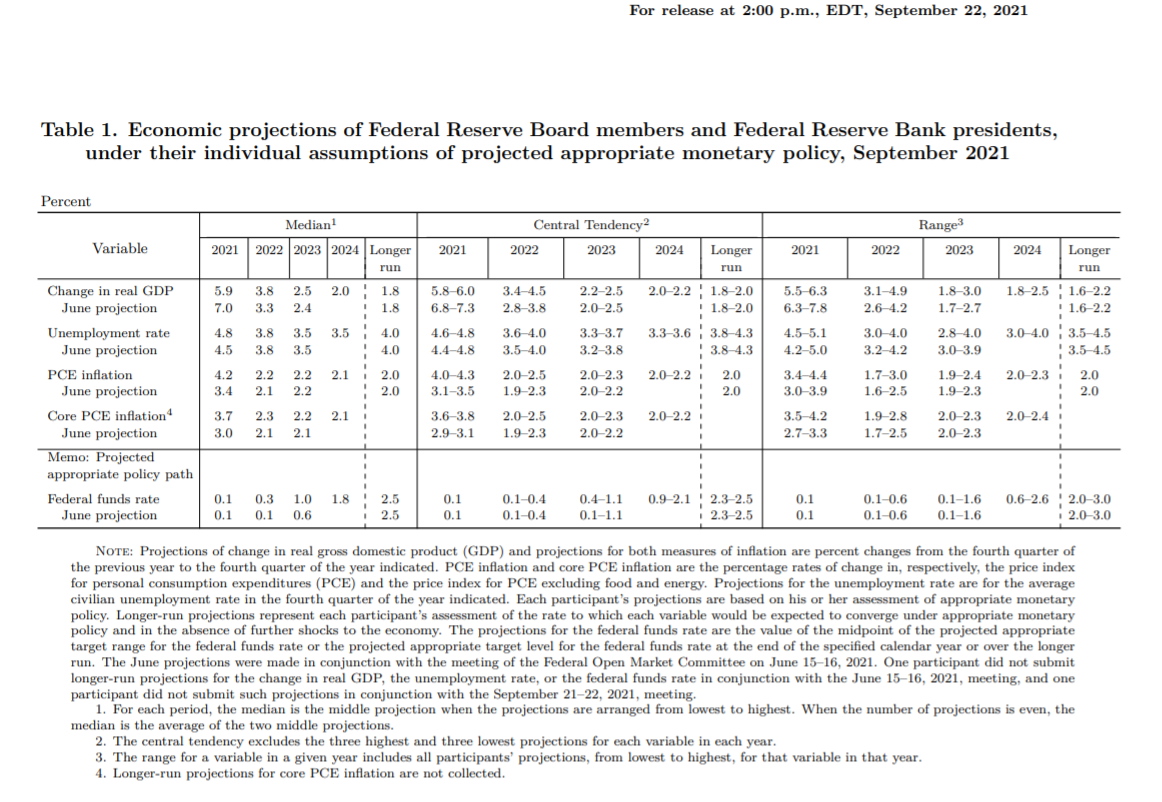 The projections run to 2024 in specific years and then a general longer category.

It is the projections for this year and especially next year that will have the greatest market impact.

Fed officials have abandoned their analysis that US inflation would be a temporary phenomenon based initially on the consumer price collapse during the 2020 lockdowns.

Blame is now laid to the labor shortage and supply chain bottlenecks, here and overseas, that have made so many goods scarce. These problems are now expected to last much longer than originally thought. Whether they are a long-term feature of an adjusting global economy has not been publicly considered by Fed officials but it has no doubt been raised in private.

Government spending and the Fed’s own massive two-year liquidity addition are factors largely unmentioned by bank officials. The monetary equation of vast amounts of new liquidity coursing through the economy chasing an increasingly rare number of goods is the classic setting for inflation. It is exacerbated today by global supply conditions. The availability of cheaper products, manufactured in lower cost countries, was one of the chief economic reasons behind the steady decline in inflation over the past 35 years. That has vanished, goods are in short supply everywhere.

The Fed’s dilemma is that inflation is easy to ignite but difficult to control, especially once consumers begin to anticipate price increases.

A survey from the New York Federal Reserve should give the Fed governors a serious pause. It showed that in November consumers expect inflation to be 6% over the next year, up from 5.7% in October.  Anticipated wage gains for the same period dropped to 2.8% from 3% in October. November’s figures leave a 3.2% wage gap, the widest since the survey began in 2013.

Interest rates have a long lead time for inflation control. A fed funds tightening cycle that began in June 2022 will have little if any impact on inflation before the following year.

The Fed has a ready option. The question is will the governors take it? Higher Treasury and commercial rates will serve very well to begin to curb inflationary excesses and reduce consumer and business expectations.

The risk is that the economy is not as strong as it appears and that the inevitable shock to equities and bond prices could send negative reverberations through the economy that would be very difficult to quell once they began.

The Powell Fed was willing to surprise and shock markets in March 2020 as the pandemic took hold. Will it be equally willing now, when the policy would be correct for inflation but may put so much else at risk?

Given the Fed’s long history of leading the market into policy changes, it seems unlikely that the FOMC and Chair Jerome Powell will execute such a drastic and potentially dangerous reverse in policy.

The Fed's goal is to excite a gradual rise in Treasury rates without sparking a wholesale bond market price rout.

Even with the Fed's normal circumspection, the odds that the economic and rate projections and Mr. Powell’s press conference will provide substantial fireworks are quite good.

The Projection Materials may serve the Fed's purpose as well as a more direct suggestion from Mr. Powell. The two crucial indicators are the inflation forecasts for 2022 and the ‘projected appropriate policy path'' for the fund rate. As these are issued with the current rate decision, they will provide markets with the first inkling of Fed intentions.

The fed funds futures from the Chicago Board Options Exchange had a 61.6% chance of three fed funds hikes by the December 14 FOMC meeting.

Consensus market expectations are probably for between two and three fed funds hikes in 2022.

If the rate projections show three hikes next year, it will be off to the races for Treasury yields and the dollar.

The equity reaction will be tempered by the GDP forecast for this year and next. Growth in the first three quarters averaged 5.1%. Adding the Atlanta Fed’s 8.7% prediction for the fourth quarter gives a guess at 5.9% for the year, exactly the Fed’s September prediction. With the year nearly over there will probably not be much variation in that number.

Economic growth for 2022 was forecast in September to be 3.8%. The higher the revision in the December materials, the better for equities.

If the Fed gives a strong hint that rates are going to rise quickly, this GDP number could determine the direction of equity prices.

EUR/USD clings to modest daily gains and trades at around 1.0350. Eurostat reported on Wednesday annual Core HICP remained steady at 5% in the Eurozone in November as expected. Investors await US ADP employment data and Powell's speech.

GBP/USD managed to stage a rebound from the 1.1950 area but lost its bullish momentum near 1.2000 as investors await the ADP private sector employment report from the US. FOMC Chairman Jerome Powell will deliver a speech on the economy and inflation later.

Gold price trades in positive territory at around $1,760 as the US Dollar struggles to find demand. Ahead of the ADP employment data from the US and Fed Chari Powell's speech, the 10-year US Treasury bond yield holds steady above 3.7%.

ADP's jobs report has finally come in line with the official NFP report. It took a hiatus and a change in formula to make that happen, but what matters is that this release finally matters.