S&P 500 rebound lacked volume even if internal strength didn‘t lag too badly. VIX isn‘t really declining as in trending lower, and given the big picture action in bonds (steeply inverted yield curve, with the short end in decline on account of more Fed tighteing expectations), it‘s no wonder. Any misguided FOMC rip is likely to be sold into. What can facilitate a misguided S&P 500 upswing then? Some modest relief over the pre-CPI unheard of possibility of 100bp before focus turns to further rate raising in Nov and Dec.

Let‘s quote from yesterday‘s extensive analysis (and then talk individual markets within their chart context):

(…) Sep FOMC is approaching, and as a result of the inflation disappointment (I told you it was to turn out sticky, it‘s service driven – and the reading refutes even the peak inflation hypothesis), bond markets started to assign some (low, but still – that‘s a major turn from last couple of weeks‘ position) probability to even a full 1% hike coming this week. The 75bp one would bring Fed funds rate to 3%, and is a very sharp reversal of the low corona era rates (too low for too long), and the risk of policy mistake is understandably very high. If anyone in the mainstream still believed in the soft landing fairy tale, it‘s probably universally clear now that the pace of the Fed tightening (and balance sheet shrinking) is to take a significant toll on the economy in the months to come. Finally, the effects of the tightening already in, haven‘t yet played out in full – and both Nov and Dec are likely to bring in more tightening.

Housing is the best leading indicator, and so many metrics beyond the unsold inventory are pointing to trouble ahead spilling over into other sectors. The second key development of last week were disappointing earnings, namely FedEx missing so badly and guiding lower on claims of worldwide recession – hard to blame them if they look at Europe and hear the permanent deindustrialization warnings, or account for China‘s slowdown. Manufacturing is also about to suffer, and it‘s been my call for months that manufacturing recession is inevitable – the ISM data would confirm. Rising initial claims point to the labor market being the final one in line to deteriorate – we aren‘t quite there yet given the not too bad non-farm payrolls.

Keep enjoying the lively Twitter feed, which comes on top of getting the key analytics right into your mailbox. Plenty of intraday nature gets addressed there, but the analyses over email are the bedrock.

Silver is likely to keep doing better than gold, the physical market suggests. $1,680 support keeps holding for now, and miners finally kicked in yesterday – at least on a daily basis. Gold wouldn‘t like the Sep FOMC really much – yields are exerting pressure while inflation expectations aren‘t on fire. 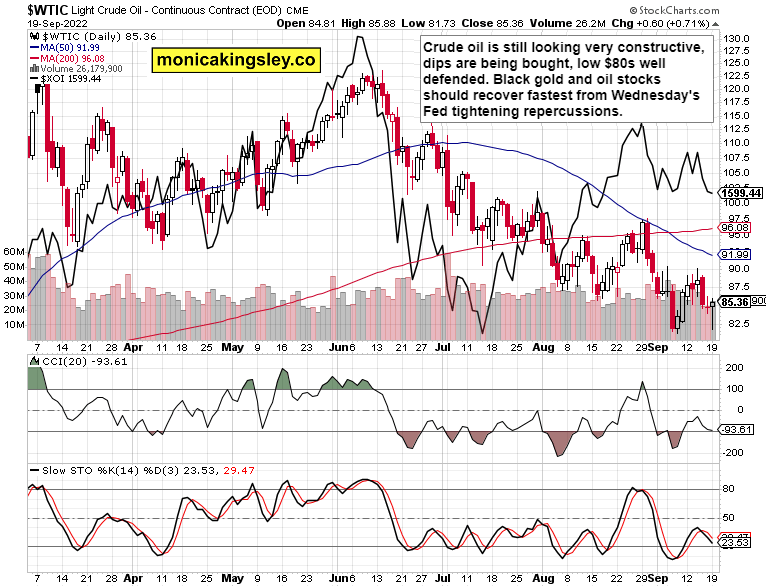 Crude oil is holding firm, and will keep on doing so still – definitely among the sturdiest commodities as it carves out a nice rounded bottom – both better seasonality and SPR drawdowns ending approach. 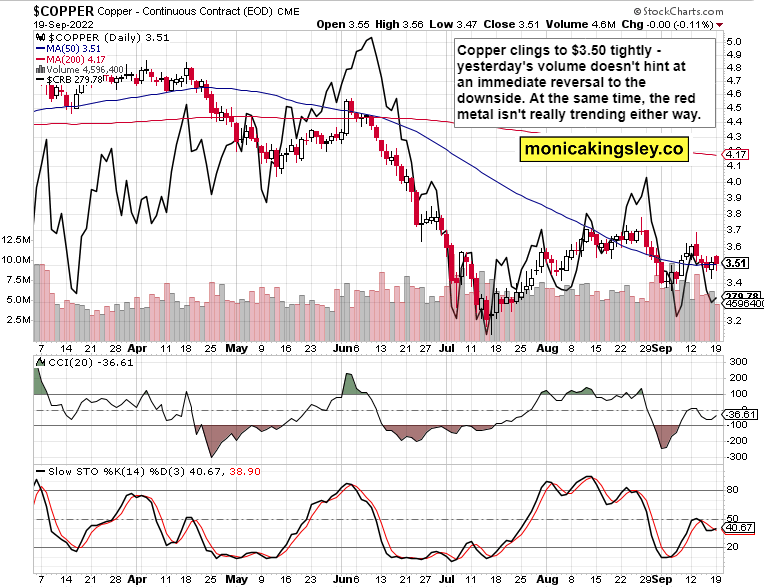 Copper is still going sideways, and the range is to remain tight in reflection of not too badly deteriorating economy in the short term, and of the physical constraints balancing out against weaker prospects in economic activity as the housing data just revealed. 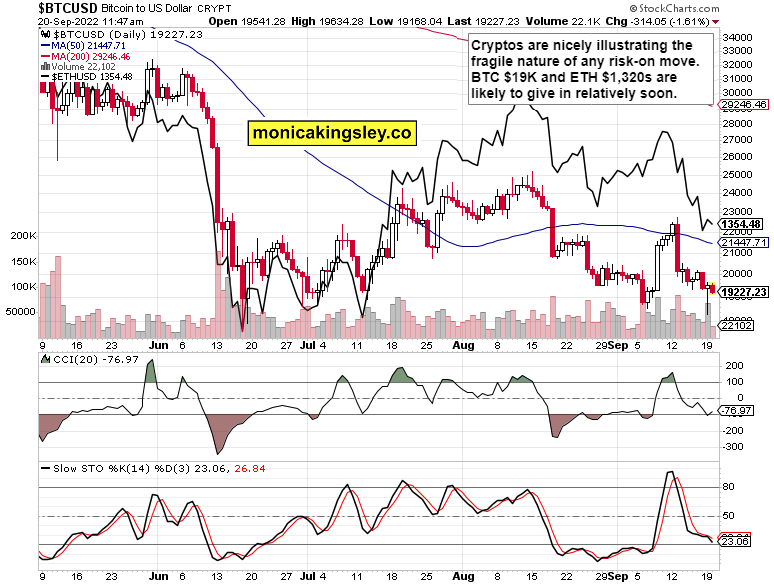 Cryptos confirm the stiffening headwinds – that‘s before FOMC. Thereafter, reality will catch up, but any reprieve in the dollar would help with a brief respite taking Bitcoin to $20K after the targets mentioned in the caption are achieved. I don‘t see a longer sustained upswing as likely – the crypto winter isn‘t over.