The Federal Reserve’s policy intentions will be the chief concern for markets as the central bank ponders the future against a background of conflicting economic, political and pandemic events.

Meeting virtually instead of within the confines of Jackson Hole Resort in Wyoming’s stunning Grand Teton Mountains, officials are expected to provide carefully modulated guidance to the central bank’s changing policy

Fed officials have been building expectations since April for a reduction in its $120 billion a month of bond purchases that have kept US interest rates pinned near historic lows for 18 months.

Numerous Fed Presidents and board members over the past three months have suggested that the economy is sufficiently revived to begin the taper. The key consideration once the decision is made to begin the reduction is to prevent a sudden rush of Treasury interest rates higher.

That condition will likely keep the comments from the various participants at the symposium, Federal Open Market Committee (FOMC) voting and non-voting members alike, anodyne, despite the extreme market anticipation.

The Fed chairman's speech is usually the highlight of the symposium and has, in the past, been used to make important points about the evolution of policy. The question before the market is whether Chair Jerome Powell, who has been one of the most cautious members about a change in policy, will use his speech on Friday to present the case for withdrawing monetary accommodation. It is certain that he will not announce any policy changes. Except in emergencies policy changes are restricted to scheduled meetings, but a positive assessment of the US economy will go a long way to convincing markets that the taper, or its schedule, will be announced at the September 21-21 FOMC meeting.

In the past Mr Powell has insisted that the Fed’s ‘sufficient further progress’ criteria for ending the bond program had not been met.

The release of the minutes of the July 27-28 FOMC meeting on Wednesday, August 18, stimulated some market volatility as they implied that most members of the board were willing to begin the bond reduction if the economy were judged strong enough.

Comments from the various FOMC members and responses to press questions as they attend the different events at the symposium will have the same potential to excite market reactions. The infamous 2013 ‘taper tantrum’ response to a comment from then Chairman Ben Bernanke which sent Treasury rates sharply higher, has been a warning text to all Fed utterances this year.

Nonfarm Payrolls have increased sharply in the last two months, averaging 940,500, and they are expected to dip only slightly to 763,000 when the August numbers are reported on September 3. If the forecast is accurate it would be the best three months for job creation since August, September and October 2020, at the tail end of the original employment recovery.

Is this enough to give the Fed confidence that labor market growth is self-sustaining and on its way to full replacement of the jobs lost in the lockdowns?

The Fed has discounted the steep rise inflation this year as a source of policy by adopting inflation averaging last September, which lets price increases run above 2% for as long as deemed necessary to bring the long-term rate to the target. According to the Fed analysis the tripling of consumer prices since January is due primarily to the contrast with last year’s lockdown collapse exacerbated by supply-chain problems and labor shortages. The Core Consumer Price Index did see its first small decline this year in July.

Michigan Consumer Sentiment plunged to 70.2 in August, the lowest since December 2011, in one of the largest single month declines on record. 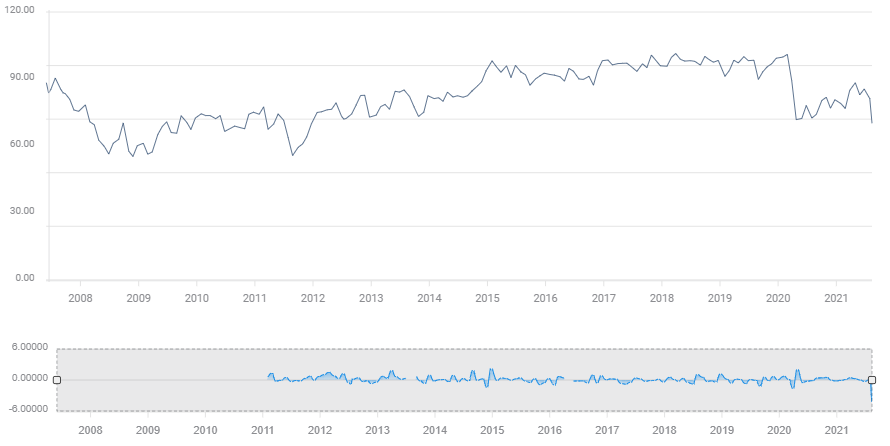 Retail Sales were much weaker than expected in July, perhaps presaging the August confidence decline, though purchases of large-ticket Durable Goods Orders held up. Business investment paused in July but has had an excellent 12-month run.

The US economy has performed well in the first half. Growth was strong, job creation revived and consumer and business spending was more than sufficient to keep the recovery on track.

While rising covid counts have not brought back lockdowns and severe social restrictions the pandemic remains a serious risk to improving growth and consumer outlook.

Is the drop in Consumer Sentiment in August an indicator of a retreat in spending in the second half of the year? Or is it the transitory effect of inflation, covid and perhaps the debacle in Afghanistan?

The Fed has been dropping hints about the next move in policy for several months. That does not mean that a change is imminent or that the credit market will run with the suggestion.

Long-term Treasury yields have beaten a long retreat from their highs at the end of the first quarter. Their recent modest recovery is not a precursor to another surge, not at least without a clearer view of Fed intentions.

Markets will respond immediately and forcefully to any hint from Chair Powell or other officials that the governors have made up their mind on policy.

It should be remembered that there are three possibilities.

Mr. Powell may praise the economy in such a way that it is obvious that the conditions for a taper have been met. Such a direct notice is rather unlikely,  because it is sure to trigger a yield rally in Treasuries, a sell-off in equities and a rise in the dollar.

Conversely Mr. Powell can again deny that “sufficient further progress'' has been made and that more time, and a reduction of external risk are needed before the Fed can withdraw accommodation. If the Fed takes that route, yields will fall minimally, they are already far below their first quarter highs, the dollar will retreat as a good part of its recent gains are based on rate speculation, and equities will receive an additional boost.

Lastly, Mr Powell can take the promising but non-committal route. Acknowledging the economic progress and the many positive signs, but also citing the many extant risks.

This approach will serve to maintain the status-quo that has a bond reduction as the next policy station without giving any definite time frame.

Given the current risks, particularly the covid increases and the fraught international political situation, the expectations for a definitive policy direction from the Fed are very likely overblown.

Mr. Powell and the governors, despite their evident desire to curtail their emergency programs, are probably not quite ready to abandon their ingrained caution.