The 2008 global financial crisis brought about a number of historic market interventions. Most are now fodder for the history books: emergency loans have been repaid and stimulus funds spent. But one vestige remains. The agencies that support the U.S. mortgage market are still under the control of the federal government. Reform has been a long time in coming, but we may soon see an end to this prolonged chapter.

The Federal National Mortgage Association, or Fannie Mae, dates back to 1938. It sprang from a New Deal program to support home sales by purchasing mortgages from lenders. In 1970, as the practice of bundling mortgages loans into securities began to take off, Fannie Mae became a private corporation. The government launched the Federal Home Loan Mortgage Corporation, or Freddie Mac, to compete with Fannie. 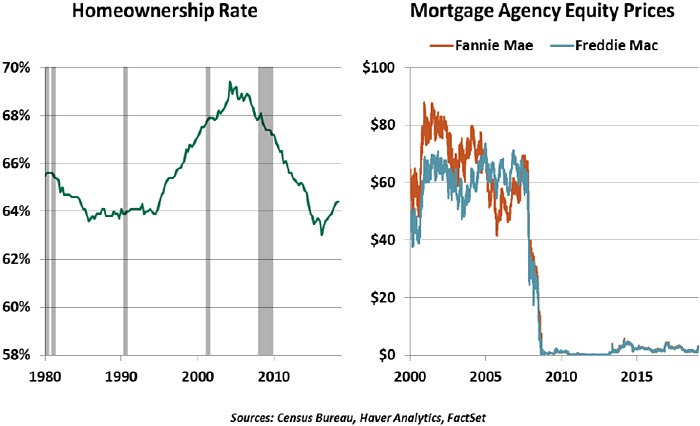 As the mortgage market scaled up, so did the agencies’ importance. Through financial innovation and legislative reforms in the 1980s, mortgages ceased to be long-dated assets held on bank balance sheets. Mortgage-backed securities (MBS) allowed originators to resell mortgage notes to willing investors. Fannie and Freddie guaranteed the performance of these instruments. Though they were chartered as private institutions, both had credit lines from the U.S. Treasury, and many investors assumed the agencies had the backing of the U.S. government.

Though the mortgage boom is now often viewed with regret, its excesses grew naturally from the missions of the agencies and the direction of regulators. Homeownership is a worthy individual and public policy goal. Homeowners gain a vehicle for long-term savings, and their commitment leads them to develop deeper roots within their communities. Policies such as the 1977 Community Reinvestment Act encourage lending to aspirational borrowers. The financial conduits afforded by these government-sponsored entities (GSEs) helped to make mortgage finance available to more consumers. In hindsight, it may have gone too far, with the U.S. reaching a peak of 69% home ownership in 2005.

As they grew, Fannie and Freddie crept beyond the scope of their initial charters. They were intended to be pass-through vehicles for mortgage debt, but they started to carry greater amounts of mortgage debt on their own books. They ventured beyond owner-occupied housing and into multi-family financing. Along the way, they operated with low capital levels inconsistent with the risks of home lending. Once the crisis struck, the agencies were at risk of failure.

As the crisis took hold, the government intervened, placing Fannie and Freddie into conservatorship, injecting $187 billion of capital and requiring their earnings to be paid directly to the U.S. Treasury. The agencies’ shareholders kept a claim to ownership but would no longer receive dividends; their equity values were nearly wiped out. Observers still question why and how this was done, but the operative goal at the time was stability:
The government acted to keep the MBS market alive. Had it collapsed, broader financial
dislocations would have followed. 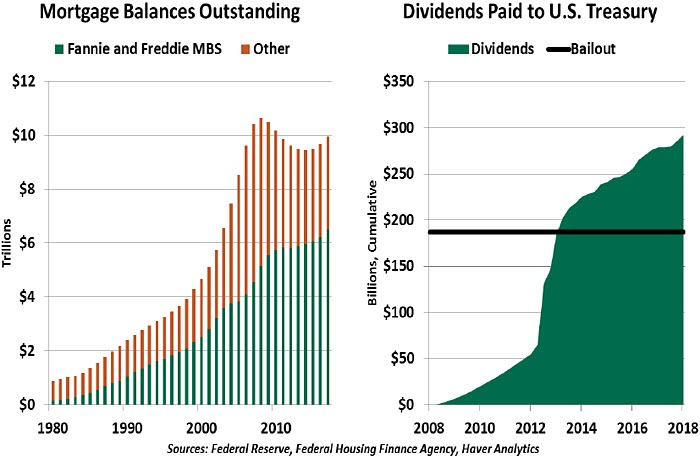 Now, more than ten years later, the residential housing market is functioning well. House prices in most markets have recovered. Lending standards are tighter, curtailing growth in risky loans. Fannie and Freddie are still insuring and securitizing mortgages. Their steady business has become a valuable source of revenue for the government, with cumulative dividend payments now $100 billion in excess of the bailout funds they received.

But there is a desire to close the books on the bailout, and there are once again calls to move the agencies out of conservatorship and back into private hands. We foresee a series of obstacles to that goal:

Solutions could come through any of the three branches of government. Last June, the administration outlined a plan to reform Fannie and Freddie, fully privatizing the agencies and curtailing the government’s provision of mortgage insurance. Mark Calabria, the nominee to lead the Federal Housing Finance Agency (FHFA), has questioned the role of the GSEs and even the fundamental existence of products like the 30-year mortgage. In Calabria’s questioning before Congress this week, he affirmed
Congress’ role in setting a reform agenda but indicated he would like to see the agencies rebuild their capital base.

In Congress, agency reform is gathering some momentum. An agenda proposed by U.S. Senator Mike Crapo would privatize guarantors and create a fund to support affordable housing initiatives. Insuring loans and servicing MBS are functions that can be done by the private sector and may benefit from competitive pricing. However, history is not forgotten, as all proposals affirm the role of the FHFA as a strong central regulator that will ensure equal access and keep market excesses in check.

Whatever the mechanism, a reformed agency structure will alter the mortgage market. The government must pledge that there will be no future guarantor bailouts. The assortment of loans that the agencies will insure would then be likely to shrink, as higher-dollar loans tend to be higher-risk. Mortgage rates and closing costs would rise, as loans would become more risky without the loan insurance provided by Fannie and Freddie. However, a more competitive market for mortgage insurance may emerge, potentially reducing prices as well as the systemic risk of market concentration.

We share the desire to put this last piece of crisis intervention behind us. We only hope it is done in a way that avoids laying the foundation for the next one.

Amid an ongoing trade conflict with the U.S. and an attempted transition to a more sustainable level of leverage, China is ratcheting up its efforts to engineer “a soft landing.” The slowing of the Chinese economy is apparent across a broad range of indicators, and given the skepticism about the accuracy of the Chinese government data, many fear the growth may be considerably lower than reflected in the numbers.

The slowdown has prompted policymakers to respond by implementing an expansive range of fiscal and monetary policy measures such as fast-tracking infrastructure projects, cutting taxes and lowering banks’ reserve requirements. More specifically:

The current combination of monetary, credit and fiscal stimulus measures are unlikely to yield significant results. Excess capacity, high leverage and lack of confidence among private businesses will conspire to limit the impact of policy actions. State-run enterprises, in particular, might use the additional liquidity to refinance their debts instead of initiating new endeavors. 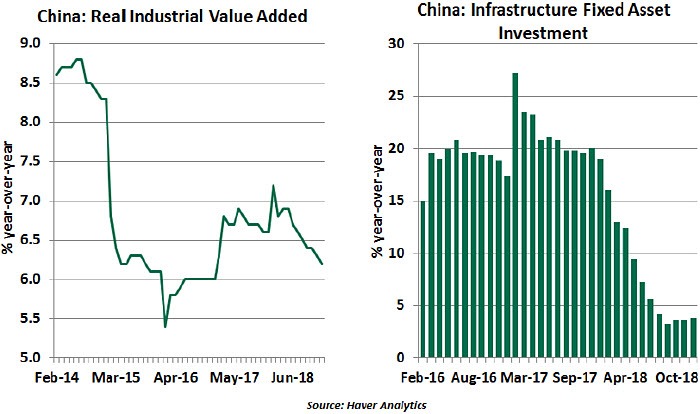 Chinese policymakers do have ample ammunition for additional stimulus. Against the backdrop of a worsening outlook, further tax reductions and increased spending on infrastructure are almost certain, though not to the extent of the stimulus seen in the aftermath of the 2008 financial crisis. The approach, however, will likely be an incremental one.

Though policymakers have room to act, their use of all available measures would be accompanied by side effects. Stimulating without necessary reforms and deleveraging efforts would only add to already-high debt levels. Lowering benchmark rates quickly could lead to a weaker currency, risking renewed accusations of currency manipulation.

Monetary policy adjustments are key tools that have not been fully utilized. While the central bank has been injecting liquidity, it has not moved its benchmark interest rate since 2015. If the existing measures prove to be inadequate, the PBoC will likely be ready to cut rates, as well.

All of this might help the economy avoid a hard landing in the short term, but turning away from reforms and using the old measures that caused imbalances will only amplify structural problems in the long term. Maximizing the strength of the current expansion may ultimately jeopardize its health.

Too Small To Succeed?

Last week, SunTrust and BB&T announced the first large bank merger in more than a decade. The proposed combination marks a significant milestone and provides a window into the future of the industry.

Five years ago, the two companies probably wouldn’t have dreamed of becoming one. With real estate in the southeastern United States among the biggest casualties of the mortgage meltdown, both banks were struggling. Both were required to add substantially to their capital, and both were challenged to improve their risk management practices. Each was looking inward, not outward.

Further, concern over “Too Big to Fail” made regulators cautious about approving additional consolidation in the industry. SunTrust and BB&T each hold a significant share of the branches in several states, inviting concern about a reduction in customer choice. And bigger banks face higher regulatory expectations.

But times have changed. Congress passed a law last year directing the Federal Reserve to reduce the supervisory burden for banks with less than $700 billion in assets. (The combination of BB&T and SunTrust will have about $440 billion in total assets.) Geographic dominance of bank branches is not the anticompetitive factor that it once was, with customers
able to manage an increasing fraction of their affairs virtually. And with so much of finance now handled outside of the banking system, concentration among traditional commercial banks provides less market leverage than it used to. 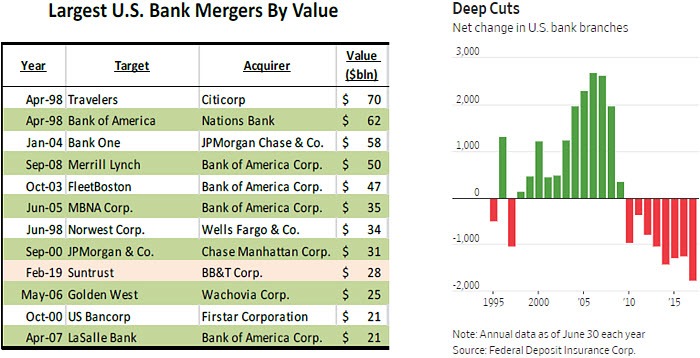 A stated motivation of the BB&T/SunTrust merger is adding momentum to their technology programs. Making maximal use of client data and analytics will be a differentiator for banks in the decade ahead, and larger firms can spread investment in this area over a larger base. As a result, “bigger” is once again “better” in the banking industry; expect more large link-ups in the years ahead.