Firstly the EWC instrument inception date was 3/12/1996. The Canada ETF seeks to track the investment results of an index composed of large and mid-sized companies in Canada. This is of course reflected in the price. The best Elliott Wave reading of the long term cycles presume some lower prices that did not exist prior to the ETF fund inception date.

Shown on the monthly chart, the bullish cycle from all time lows is believed to have ended in November 2007. This is mostly in line with many other broad based ETF’s and indices that ended larger cycles near that time. Likewise the steep pullback lower into the March 2009 lows replicated the pullbacks in other ETF & indices instruments. This pullback was strong enough to suggest it had corrected the cycle up from the all time lows. The analysis and commentary continues below the EWC Monthly chart. 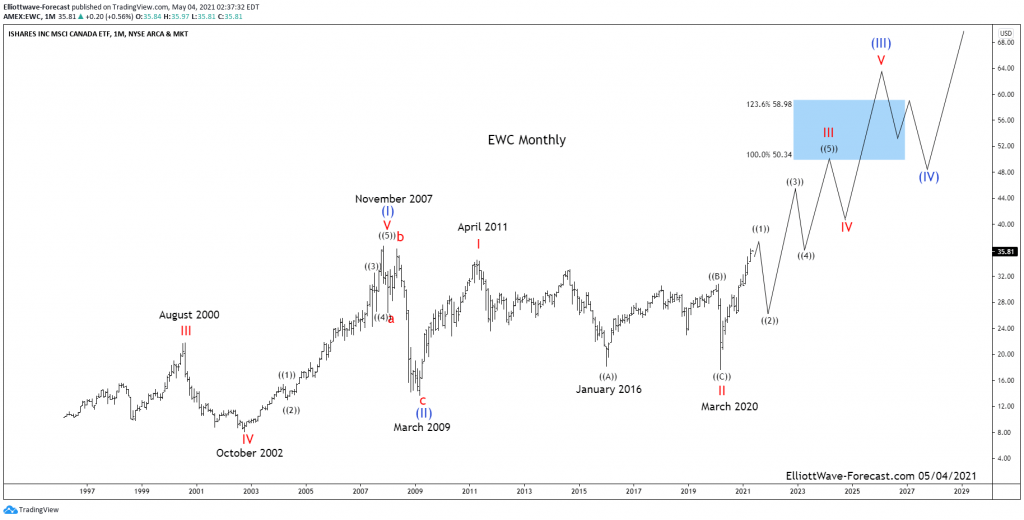 Secondly, the bounce from the March 2009 lows has not got back above the November 2007 highs as of yet. Compared to other indices instruments it is lagging. That’s not to say it will not catch up it is just the way it works out. EWC bounces higher as related instruments are going higher however at a slower pace. Similarly, the instrument corrects cycles in pullbacks lower when the related instruments are doing the same.

The analysis and conclusion as mentioned earlier; Price has not got above the November 2007 highs yet. As the above chart shows it will eventually in due time. The cycles remain bullish nearer term while pullbacks remain above the March 2020 lows. The instrument should proceed higher with the related other countries ETF’s and indices reflecting the improvements in the progression of mankind.