The EURUSD extended its November advance to 1.0480 on Tuesday, but the momentum faded afterwards and finished the week at around 1.0350. The US Dollar remained on the back foot at the beginning of the week amid mounting speculation the US Federal Reserve (Fed) will pivot on monetary policy following signs of easing inflation in the United States.

The upbeat mood faded throughout the week amid signs of inflationary pressures remaining high globally, mounting tensions between Russia and Western nations, and fears of new supply-chain issues after the latter seem to be resolved. The Euro that previously benefited from the US Dollar's broad weakness pared gains and finally gave up some of those.

Risk-off factors weighed on the Euro

The United Kingdom reported the Consumer Price Index (CPI) rose by 11.1% YoY in October, a record high. The country is so far the only one in which authorities openly acknowledge the economy is in a recession. The Euro Area Consumer Price Index was confirmed at 10.6% in the same period, barely below the preliminary estimate of 10.7%.

Mid-week, a bout of panic hit financial markets following news that suspected Russian missiles landed in a Polish city close to Ukraine’s border, killing two people. After an investigation, NATO believes that it was a missile from Ukraine’s defense that actually stroke Poland, although the issue is still under investigation.

Also, China keeps reporting rising coronavirus cases. The country announced 23,276 new contagions on Thursday despite its strict zero-covid policy. Lockdowns spread through different regions, resulting in civilian unrest. China has barely eased some of its restrictive measures to close contacts, and the world fears the battered Chinese economy could spur a global contagion as it happened in the early stages of the pandemic.

European Central Bank and Federal Reserve policymakers in the wires

Central banks, in the meantime, are giving hints ahead of their mid-December monetary policy meetings. The European Central Bank (ECB) President Christine Lagarde said on Friday they will keep raising rates, adding they may even need to restrict economic activity to tame inflation. "We expect to raise rates further – and withdrawing accommodation may not be enough," Lagarde added. The ECB deposit rate stands at 1.5%, well below the 4% of its American counterpart.

The US Federal Reserve has adopted an aggressive stance much earlier than the ECB and is moving closer to restrictive rates, expected to bring inflation further down. In the long-term, the United States Fed Funds Rate is foreseen at around 5% through 2023 and down to 4.5% in 2024.

Another factor weighing on high-yielding assets this week came from the Federal Reserve. A rising number of Fed officials suggested the central bank may need to maintain its aggressive stance for a while, as progress in taming inflation has not been sufficient.  The US Federal Reserve will announce its decision on December 14, while the European Central Bank will do the same on December 15, granting some action ahead of the winter holidays. Speculative interest will likely rush to price in any single comment ahead of the announcements, particularly if they diverge from the idea of a Fed pivot or a conservative ECB.

Better macroeconomic signs came from the United States, as the country’s Producer Price Index (PPI) was up by 8% YoY in October, easing from the previous 8.4%. The core reading came in at 6.7%, down from 7.1% in September. Additionally, Retail Sales were up 1.3% MoM in September, beating all estimates.

Nevertheless, and despite the poor market mood, US Dollar gains were quite limited. Two main factors could explain it. The first is US Treasury bond yields, which remained far below their recent multi-year highs. Yields ticked higher for the week but seem to have finally stabilized. The other factor is the conviction the US Federal Reserve will soon ease the pace of quantitative tightening, either because inflation eases or because they reach restrictive levels.

The upcoming week will bring some first-tier events that could trigger sentiment reactions. S&P Global will publish the preliminary estimates of its November PMIs for the European Union and the United States. The latter will also publish October Durable Goods Orders and the FOMC Meeting Minutes. Finally on Friday, Germany will unveil the second estimate of its Q3 Gross Domestic Product (GDP).

The EURUSD pair has lost its long-term bullish strength, but nothing is said and done yet. The weekly chart shows that EURUSD held at the upper end of the previous week’s range while posting a higher high. The 20 Simple Moving Average (SMA) remains flat at around 1.0030, barely above a critical Fibonacci level, the 61.8% retracement of the November rally at around parity. The 100 SMA crosses below the 200 SMA, both gaining bearish traction far above the current level, not a good sign for Euro bulls. Finally, technical indicators have turned flat right above their midlines, suggesting decreased chances of higher highs in the upcoming days.

The daily chart shows that the pair briefly surpassed a bearish 200 SMA earlier in the week but also that sellers rejected advances around it in the following days. The EURUSD has been below the moving average since June 2021, and it will be a critical trend indicator as buyers will cheer a bullish breakout of the dynamic resistance level. The same chart skews the risk to the upside, as the Momentum indicator maintains its bullish slope, despite being in overbought territory, while the Relative Strength Index (RSI) consolidates around 67. Furthermore, the 20 SMA heads firmly north after crossing above the 100 SMA, the latter also converging with the mentioned Fibonacci support level. 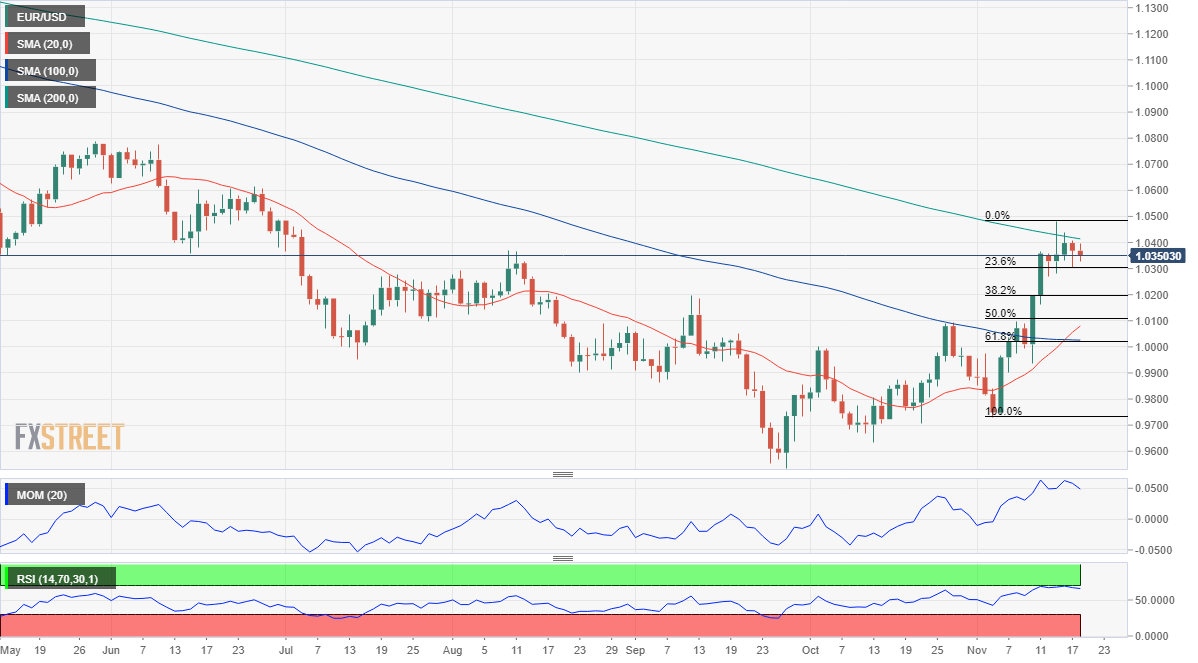 According to the FXStreet Forecast Poll, the EURUSD pair could share some ground next week. The average target is 1.0211, with 56% of the polled experts eyeing lower levels. Nevertheless, most market players believe the pair will remain above parity, quite a shift from what we saw for most of the year. The longer-term perspectives are bearish amid banks still betting on the US Dollar. Reviews may be available soon.

The Overview chart shows that moving averages remain neutral, as most bets remain below the current level. Still, the number of those betting for higher highs in the monthly and quarterly views continues to increase.