The Canadian dollar remained in a tight range after the Bank of Canada interest rate decision. The bank left key interest rates at a historic low and maintained its bond purchases at C$3 billion every month. The Loonie held steady because this statement was in line with what analysts were expecting. The bank said that it expects the country’s economy to have a major comeback as global demand rises. The statement did not elaborate on measures to intervene to weaken the Loonie, which is at the highest level since September 2017.

Bitcoin held steady during the Asian and American sessions as traders focused on news from El Salvador. The Latin American country became the first in the world to accept Bitcoin as a legal tender. This means that people can use it to pay for items and file for taxes. They will also not be charged a tax for exchanging the US dollar to Bitcoin and vice versa. The coin also rose after it emerged that JBS paid $11 million in Bitcoin as ransom after last week’s hack. This means that the US could impose further regulations on ransomware and even cryptocurrencies.

The euro retreated ahead of the European Central Bank (ECB) decision. The bank is expected to leave interest rates unchanged and possibly hint to when it will start slowing asset purchases. The news comes at a time when preliminary data shows that the Eurozone economy is having a strong recovery. In addition to the ECB decision, the next key mover will be the American inflation data. Analysts expect these numbers to show that the headline CPI rose by 4.7% while core CPI rise by 3.4% in May.

The EURUSD declined from yesterday’s high of 1.2218 to 1.2168. On the three-hour chart, the pair managed to move below the upper side of the descending channel. It also moved below the 25-day moving average (MA). The RSI has moved from yesterday’s high of 61 to 48. It also formed an evening star pattern. Therefore, the pair will likely keep falling as bears target the lower side of the channel at 1.2100. 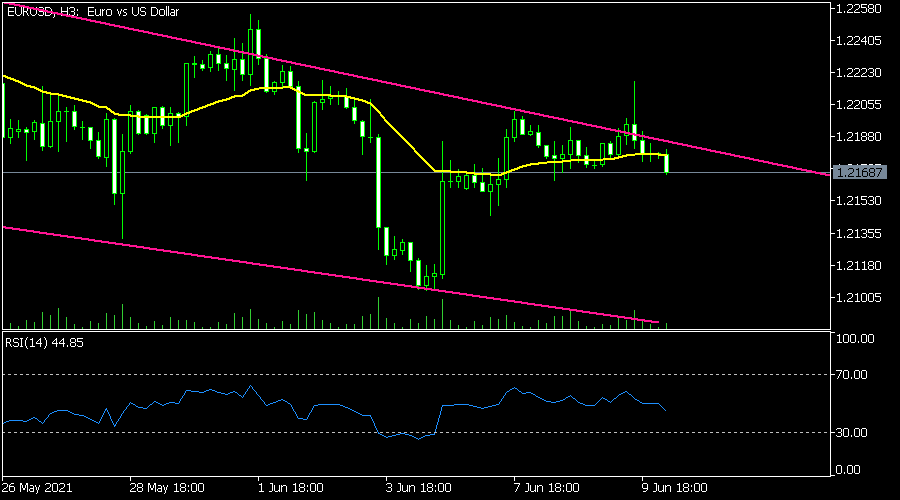 BTCUSD rose to more than 36,000 after the decision from El Salvador. On the four-hour chart, the pair has moved close to the 23.6% Fibonacci retracement level while the Relative Strength Index (RSI) has risen to 60. It is slightly below the pink descending trendline and above the 25-day and 15-day moving averages. Therefore, the pair will remain in a bearish trend so long as it is below the descending trendline.

The USD/PY pair rose slightly after the latest Japanese producer price index (PPI) data. On the four-hour chart, the pair moved above the lower line of the ascending channel. It is also slightly below the 61.8% Fibonacci retracement level while the signal and main lines of the MACD have made a bullish crossover. Therefore, the pair will likely keep rising as bulls target the upper side of the channel.