EUR/USD is lower in the Thursday session, following the downward trend which has marked much of the week. Currently, the pair is trading at 1.1602, down 0.31% on the day. On the release front, there or no eurozone or German indicators. In the U.S, unemployment claims is expected to rise to 220 thousand. The Philly Fed Manufacturing Index is expected to climb to 21.6 points. On Friday, German PPI is expected to dip to 0.3% and the eurozone current account surplus is forecast to narrow to EUR 27.2 billion.

The tariff slugfest between the U.S and its major trading partners has raised serious concerns not just with investors, but with Federal Reserve policymakers as well. The Federal Reserve Beige Book for July, released on Wednesday, was rife with references to ‘tariffs’. This trend started in the April Beige Books after President Trump threatened in March to impose tariffs on China. Most of the twelve Fed regional districts referred to tariffs in their individual reports, which make up the Beige Book. Some Fed policymakers have also voiced their concern over the impact that tariffs could have on the U.S economy and is an issue the Fed will have to take into consideration, as it mulls over rate policy for the next six months.

Fed Reserve Chair Jerome Powell reaffirmed his positive outlook on the U.S economy in testimony before the Senate Banking Committee earlier this week. Powell said that he expected the labor market to remain tight and inflation to stay close to the Fed’s target of 2 percent for the next several years. Powell added that the Fed would continue to gradually raise interest rates. Lawmakers appeared satisfied with current monetary policy, but Powell did face some pointed questions regarding the escalating trade war, which has raised concerns that economy could take a downturn if the tariff battles continue.

A milestone was reached on Thursday, as Eurozone Final CPI reached the 2.0% threshold in the June release. On an annualized basis, Final CPI also came in at 2.0%. This marks the highest level since February 2017. As the ECB prepares to wind up its asset-purchase program, the markets are looking for clues about a possible rate hike. Such a move would likely have a significant impact on the markets, as the ECB last raised rates back in 2011. If inflation levels continue to rise, there will be more pressure on the ECB to consider a rate hike sooner rather than later. 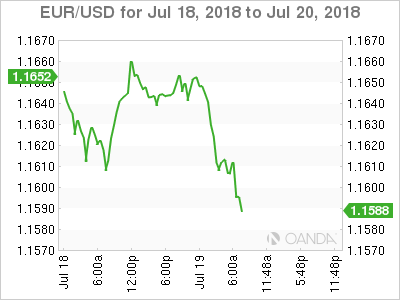