The EUR/USD pair gave up this week and finished it around 1.1830 after failing to move beyond the 1.1900 threshold following a tepid US employment report. The American dollar recovered on a dismal market mood until Thursday when the ECB monetary policy decision and weaker US government bond yields took their toll on the pair.

The market’s sentiment deteriorated throughout the first half of the week, although there was no particular catalyst behind such a move.  An empty macroeconomic calendar and the spread of the coronavirus Delta variant fueling concerns about the recovery path could be the reasons behind the dismal mood. Surprisingly, demand for government bonds was low, with yields holding onto the higher ground.

Taper that is not tapering

Things changed on Thursday as the European Central Bank announced its decision on monetary policy. As widely anticipated, the central bank left its rates unchanged, with the main refinancing rate at 0.00%. The central bank also maintained the emergency bond-buying program (PEPP) at  €1,850 billion until at least March 2022, although it will continue at a “moderately lower pace.” Additionally, APP purchases will continue at a monthly pace of €20 billion for as long as necessary.

It is worth noting that policymakers are ready to adjust all instruments to ensure inflation stabilises at their 2% target over the medium term. Lagarde pushed EUR/USD lower as he remarked that high inflation is expected to be temporary and a result of bottlenecks. She sounded optimistic about the economic recovery, but noted that pandemic developments would continue to lead their way. Finally, she said that the central bank is “re-calibrating” the PEPP, not tapering.

Also on Thursday, US government bond yields fell after a 30-year Treasury auction that attracted above average demand. The yield on the 10-year US Treasury note fell to 1.287%, breaking below the critical 1.30% threshold, although it stabilised around the latter at the end of the day.

On a positive note, US Initial Jobless Claims for the week ended September 3 fell to a seasonally-adjusted 310,000, the lowest level in almost 18 months, beating expectations. In addition, Producer Prices in the country were up in August, reaching 8.3% YoY.

European data was mixed, with positive signs coming from Germany. Factory Orders were up 24.4% in July, while Industrial Production in the same period increased by 5%. EU Gross Domestic Product was upwardly revised to 2.2% QoQ in the second quarter. The down note came from the ZEW Survey, as Economic Sentiment shrank to 26.5 in Germany and 31.1 in the EU in September.

In the upcoming days, attention will return to US data. The country will publish the final reading of August inflation data and August Retail Sales, foreseen down 0.7% in the month. Finally, on Friday the focus will be on the preliminary estimate of the September Michigan Consumer Sentiment Index, foreseen at 70.2.

The EU will publish a few minor figures and the final estimates of August inflation figures.

The EUR/USD pair seems poised to resume its decline in the long term. The weekly chart shows that the pair keeps developing below a mildly bearish 20 SMA, although the 100 SMA is crossing above the 200 SMA, both around 1.1580. Meanwhile, technical indicators have turned marginally lower within negative levels, indicating limited buying interest.

The daily chart shows that EUR/USD remains far below mildly bearish 100 and 200 SMAs while above the 20 SMA. The latter has lost directional strength and is currently converging with the 50% retracement of the latest bullish run at 1.1780. The Momentum indicator heads firmly lower above its 100 line, while the RSI indicator is flat within neutral levels. 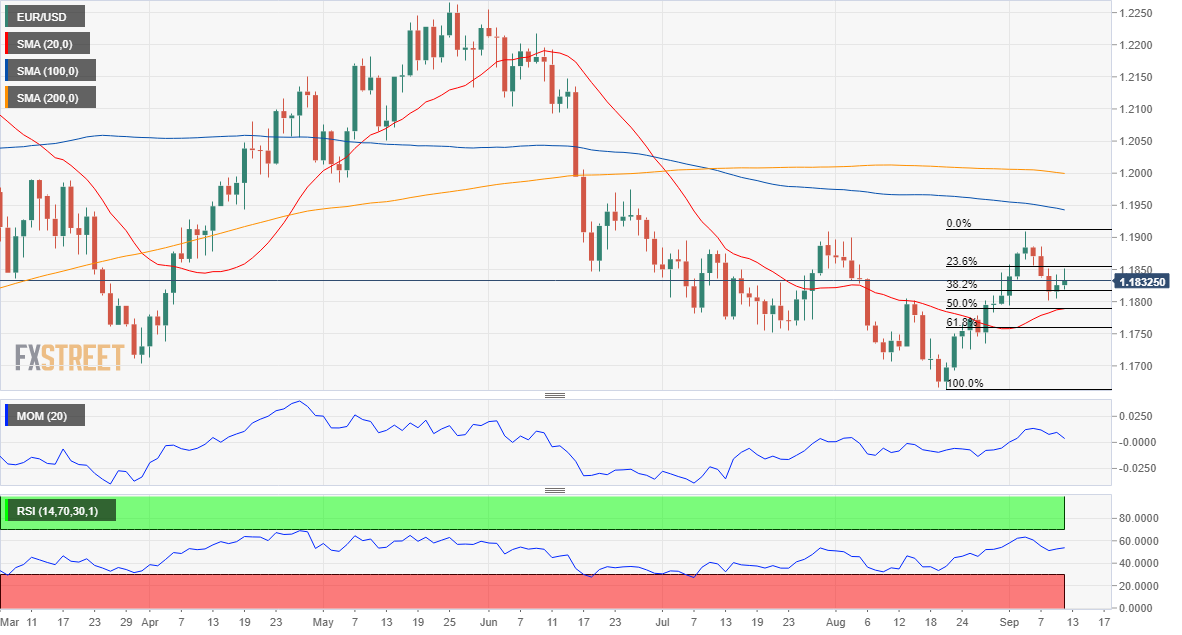 According to the FXStreet Forecast Poll, the EUR/USD pair will likely remain under pressure in the upcoming weeks. Bears are a majority in the weekly and monthly perspectives, although on average, the pair is seen holding above the 1.1800 figure. In the quarterly view, the number of those betting for higher targets increases to 43%, overshadowing those looking for a decline.

On the other hand, the Overview chart shows that bears remain in control, as the three moving averages have turned lower, reversing the peak from last week. In the weekly and monthly perspectives, most targets accumulate below the current level, which supports the bearish sentiment, while in the quarterly view there’s a wide spread of possible targets that suggest a lack of directional conviction.