Central banks provided volatility to the FX board these days, resulting in EUR/USD trading as low as 1.0358 and as high as 1.0601. The pair settled a handful of pips above the 1.0400 threshold as dollar buyers juggled between recession fears and lingering demand for safety.

The US Federal Reserve had a monetary policy meeting, and as widely anticipated, policymakers decided to lift the funds rate by 75 bps, the largest hike since 1994.  The main benchmark is now at a range of 1.5% to 1.75%. Chief Jerome Powell said that the next meeting could well be a decision between 50 bps and 75 bps, taking 100 bps off the table, which was initially read as dovish.  Stocks rallied on relief, and the dollar fell, although the movements were short-lived.

But it was not just the Fed. Central banks around the world are taking similar steps to tame inflation. However, lifting rates also means higher borrowing costs for mortgages, credit cards and other loans. And that is taking place while major economies struggle with slowing economic growth, as echoes of the coronavirus pandemic resonate. The Fed’s decision fueled fears of a US recession, pushing US main indexes to levels that were last seen in January 2021. The Stoxx Europe 600 index also plummeted to an over one-year low.

Demand for government bonds sent yields sharply down, which in turn undermined demand for the American currency.

Across the pond, the European Central Bank called for an emergency meeting amid a sell-off in bonds. “The pandemic has left lasting vulnerabilities in the euro area economy which are indeed contributing to the uneven transmission of the normalization of our monetary policy across jurisdictions,” policymakers noted before announcing they would reinvest redemptions from the ECB’s emergency bond-purchasing program in a flexible way and design a new “anti-fragmentation instrument,” to prevent potential debt crises among EU member countries.

The ECB has pre-announced it would hike rates by 25 bps in July, the first move in over a decade, lagging behind most other major central banks. That is one of the main reasons the shared currency is unlikely to gather substantial momentum, regardless of a weakening greenback.

The European situation became more fragile four months ago when Russia decided to invade Ukraine. The attacks continue, resulting in energy and oil shortages that further disrupt economic progress in the Old Continent. The latest on the matter came from the European Commission, as President Ursula von der Leyen, alongside the leaders of several member countries backed Ukraine's bid to join the EU, saying it should be given "immediate" candidate status. There’s no foreseeable end to the war, and that should add to EUR jitters.

With central banks done, for now, the focus will return to growth and inflation. The macroeconomic calendar will bring next week the June S&P Global PMIs for the EU and the US and some confidence indicators. Also, Fed’s Chair Jerome Powell is due to testify on the Semi-Annual Monetary Policy Report before the Senate Banking Committee and before the House Financial Services Committee.

The long-term picture for the EUR/USD pair is bearish. The weekly chart shows that the pair posted a lower low and lower high for a second consecutive week, while a firmly bearish 20 SMA remains far above the current level. Technical indicators have turned directionless within negative levels after correcting extreme oversold readings, reflecting bears’ strength.

The risk is also skewed to the downside, according to the daily chart. The pair plummeted below its 20 SMA last week, and the recent recovery fell short of testing it, now providing dynamic resistance at around 1.0640. The 100 and 200 SMAs accelerated their slides and maintained their firmly bearish slopes well above the current level, while technical indicators resumed their declines within negative levels.

An immediate support level comes at 1.0470, followed by the 1.0400 figure. Below the latter, the pair has room to extend its slump towards the 1.0340 region, a strong static support area. Further declines should open the door for a test of parity.

The weekly high at 1.0600 provides immediate resistance en route to the 1.0680 price zone. Further gains seem unlikely, although the next relevant level to watch is 1.0770. 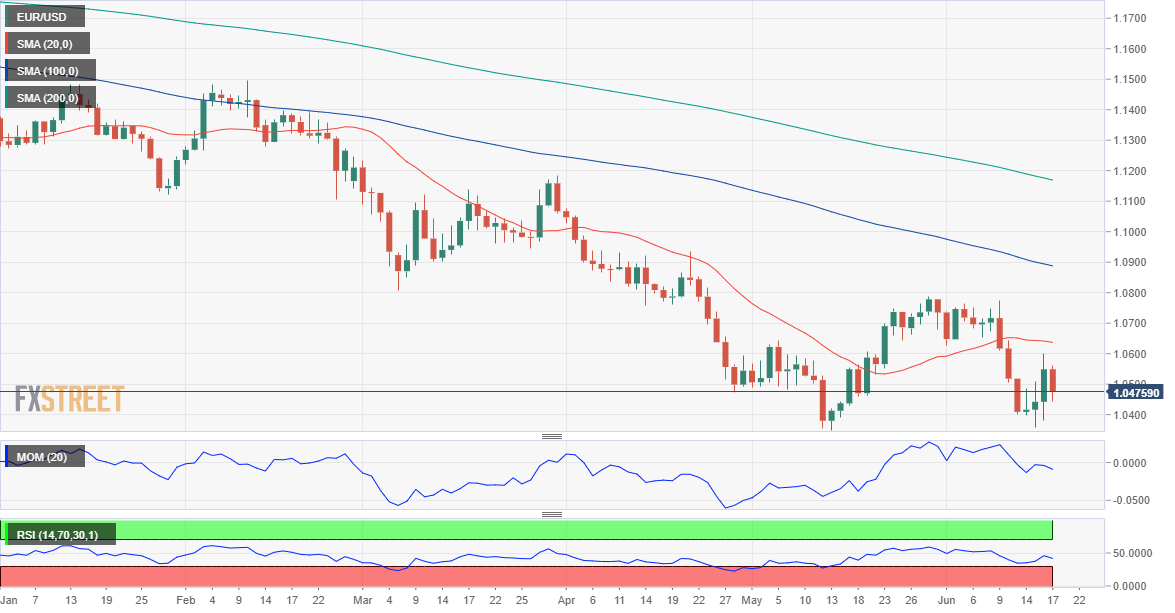 According to the  FXStreet Forecast Poll, the EUR/USD pair may soon find an interim bottom. The weekly perspective shows most polled experts expect the pair to hold around the current price zone, with an average target of 1.0448. Bulls, on the other hand, take over the monthly and quarterly views, although the pair is barely seen recovering above the 1.0500 threshold.

The near-term moving average in the Overview chart maintains a firmly bearish slope, while the longer ones have turned flat. Nevertheless, the chart shows that the number of those betting for slides below the 1.0200 price zone continues to increase, with a test of parity becoming more likely in the next few weeks.

EUR/USD is trading below 1.0600, meeting fresh supply on ECB President Christine Lagarde's introductory speech on Day 2 of the ECB Forum in Sintra. The US dollar struggles amid a positive shift in risk sentiment and firmer yields. US data awaited.