The EUR/USD pair finishes the week as it started, trading at around the 1.0820 threshold. The US Dollar attracted investors throughout the first half of the week, but its gains were moderated amid modest optimism leading the way. The Euro began recovering on Wednesday, with EUR/USD reaching a fresh nine-month high of 1.0886, and maintained the advantage heading into Friday’s close.

Financial markets are still trying to decide where to go next. In the United States, inflationary pressure had receded sharply, confirmed these days by the Producer Price Index (PPI), which rose at an annualized pace of 6.2% in December, easing from 7.3% in the previous month. Softening inflation means the US Federal Reserve (Fed) does not need to continue with the aggressive monetary tightening to tame prices. Higher borrowing costs are a consequence of such a monetary policy, and hence, economic growth tends to slow.

The European Central Bank to stay on course with rate hikes

On the other hand, the Euro was weighed by market talks suggesting European Central Bank (ECB) policymakers were discussing the possibility of slowing the pace of rate hikes. On Tuesday, rumors pointed out a possible 50 basis point (bps) rate hike in February, followed by a 25 bps increase in March. However, European Central Bank  policymaker Francois Villeroy de Galhau said on Wednesday that it is "too early to speculate about what we will do in March." His words partially offset speculation the ECB would hike rates by 25 bps in March.

Macroeconomic figures released this week confirmed ECB policymakers’ hawkish views,  as Germany confirmed the Harmonized Index of Consumer Prices (HICP) rose at an annual pace of 9.6% in December, barely easing from record highs of 11.6% YoY. The Euro Zone HICP in the same period resulted at 9.2%, as previously estimated.

The confirmation that policymakers will keep tightening monetary conditions finally took its toll on global equities. Stock markets dipped in the red, while demand for safe-haven assets increased. Gold outperformed the US Dollar, while rising bond prices kept yields in check. The Greenback, however, was unable to take advantage of the risk-averse environment, a sign that speculative interest is still willing to sell the American currency.

Beyond the poor performance of equities, the sentiment soured on the back of tepid macroeconomic data coming from both shores of the Atlantic and hinting at higher risks of a recession.

The upcoming week will shed some light on how economic growth is doing. On Tuesday, S&P Global will release the preliminary estimates of its January PMIs for the Euro Zone and the United States. Business activity is expected to remain in contraction territory, although also to improve from the December levels.

Thursday will be a key day, as the United States will publish the preliminary estimate of its Q4  Gross Domestic Product. Annualized growth in the last quarter of 2022 is foreseen at 2.8%, easing from the previous 3.2%. At the same time, the country will publish December Durable Goods Orders, expected to have increased by 2.5% MoM. Finally, on Friday, the US will publish the Fed’s favorite inflation figure, the core Personal Consumption Expenditures Price Index for December.

The EUR/USD pair has advanced for a fourth consecutive week, and more relevantly, it held above a critical Fibonacci resistance level, the 61.8% retracement of its 2022 slump. It managed to post a higher high and a higher low in the same time frame, which hints at a continued advance ahead of February central banks’ decisions.

However, technical indicators have lost their upward strength within overbought levels, suggesting easing buying interest. The weekly chart also shows that EUR/USD  develops far above a bullish 20 Simple Moving Average (SMA), which currently converges with the 38.2% retracement of the 2020 slide at 1.0280. At the same time, the 100 SMA extended its decline below the 200 SMA while above the current level, providing relevant dynamic resistance at around 1.1100. Generally speaking, the weekly chart indicates that bulls retain control of the pair, but also that they are losing conviction. It is worth noting that, at the time being, there are no signs of selling interest.

On a daily basis, technical readings reflect a similar picture to that seen in the larger time frame. EUR/USD bottomed for the week at 1.0765, meeting buyers ahead of the aforementioned Fibonacci support. Technical indicators lack directional strength, the Momentum flat within neutral levels, and the Relative Strength Index (RSI) hovering at around 61, in line with absent bears.  At the same time, the 20 SMA advanced throughout the week, maintaining its upward slope a handful of pips below 1.0745. The longer moving averages, in the meantime, slowly grind north below the shorter one, but the 100 SMA still stands far below a flat 200 SMA.

The pair needs to run through the 1.0900 figure to be able to extend gains, with the next relevant resistance level at 1.1020. Beyond the latter, the 1.1100 price zone comes as the next potential target. On the other hand, a daily close below 1.0745 will discourage buyers, and could trigger a downward corrective extension, initially towards 1.0640 and later to 1.0515, the 50% retracement of the 2022 slump. 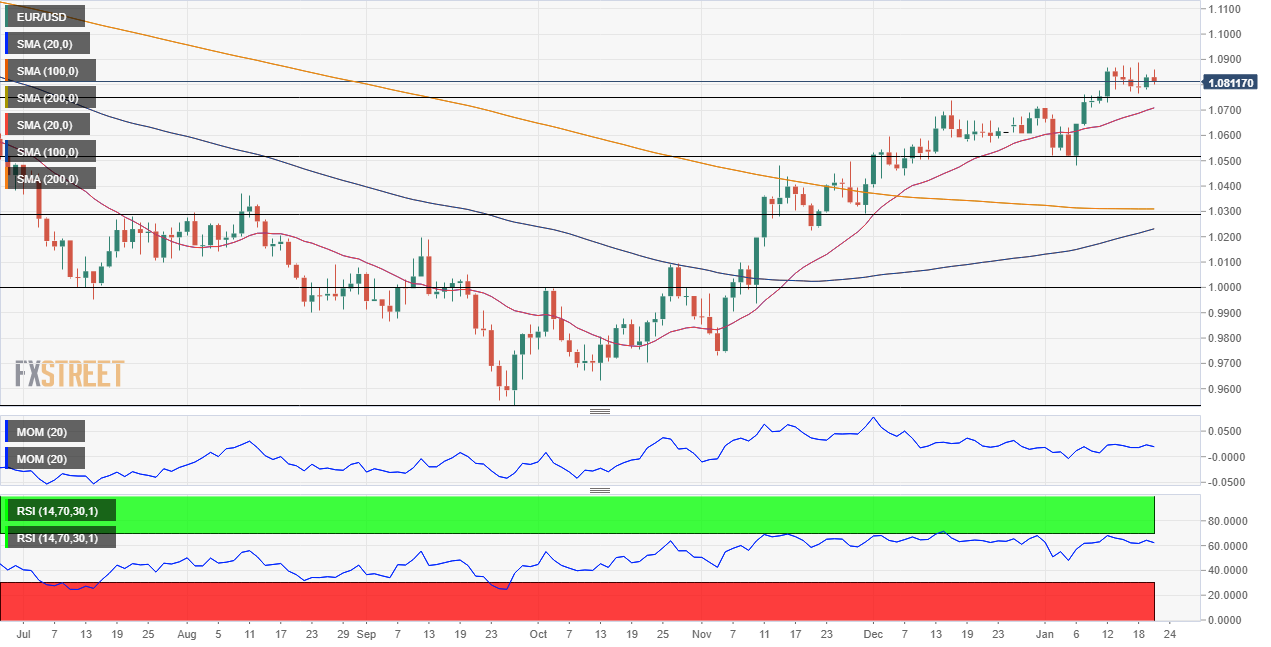 According to the FXStreet Forecast Poll,  the EUR/USD pair has a limited bullish scope. In the weekly perspective, the pair is seen confined to the  1.0600/1.0900 region, with bears accounting for 50% of the polled experts. The number of those betting for lower levels increases in the monthly view to 65%, while it further raises to 75% in the three-month view, with the pair seen on average at 1.0514.

The Overview chart reflects investors’ uncertainty in the near term. The weekly moving average has turned flat, with most potential targets accumulating below the current level.  The monthly and quarterly views offer a wide spread of potential targets, although the bottom end keeps moving higher, alongside the upper one. Gains beyond the 1.1000 psychological mark are at sight, with bets in such a direction growing on a monthly basis.

Gold price is holding steady above the $1,900 mark, as sellers take a breather after a sharp pullback from ten-month highs of $1,960. A sense of calm prevails in Fridya’s tradiung so far, as investors stay on the sidelines and assess the latest central banks’ policy decisions and its market impact going forward.

Uniswap price shows a steady uptrend with higher highs and higher lows. While this outlook alone might instill confidence in a layman investor, a closer look reveals weakness.

How impactful has the US jobs report been on gold’s valuation? In this article, we present results from a study in which we analyzed the XAUUSD pair's reaction to the previous 30 NFP prints.