Risk aversion took over financial markets at the end of the week, and against the general belief, the greenback edged lower. Earlier in the week, the American dollar reached fresh 2021 highs vs the shared currency, with EUR/USD bottoming on Wednesday at 1.1185. Throughout the first half of the week, market participants were worried about stubbornly high inflation, pricing in the possible countermeasures  – reducing QE and hiking rates – central banks may need to take.

Concerns were backed by macroeconomic reports, as the preliminary estimates of November Markit PMIs indicated that, in the EU, the upturn was accompanied by a marked increase in inflationary pressures during the month, with costs and selling prices rising at record rates. At the same time, the US reported the Personal Consumption Expenditures Price Index’s core reading soared to 4.1% YoY, the highest in three decades. Core PCE inflation is the Federal Reserve’s preferred measure when it comes to taking monetary policy decisions.

Nevertheless, policymakers have been utterly cautious, although the  Minutes of the Fed’s November meeting released Wednesday showed many participants were of the view that elevated prices could become more persistent and that the central bank should be prepared to taper further if needed.

On the other hand, the European Central Bank  Monetary Policy Accounts showed that the ECB is in no rush to change its monetary policy. The document reiterated that net purchases under the Pandemic Emergency Purchase Programme (PEPP) could be expected to come to an end by March 2022 and that monetary policy decisions need to be data-driven.

Central bankers seem to be chasing inflation, and market participants fear the economic downturn resulting from policymakers doing too little, too late.

Unexpected downturn in the pandemic development

The US celebrated Thanksgiving on Thursday, keeping all of its markets closed, which in turn kept major pairs within familiar levels and the greenback near its multi-month highs. The market’s sentiment took a turn to the worst late on Thursday, on news indicating that a new coronavirus variant found in South Africa has a spike protein that is 'dramatically different' to the one which vaccines are based on, raising fears it could evade the immune response, according to Reuters.

The EUR/USD pair surged to 1.1294 on Friday and aims to close the week a handful of pips below that high. The news came as Europe struggles to contain a new wave of infection,  and while several countries announced restrictive measures to contain the spread. As a result, Wall Street futures plummeted, with the DJIA shedding over 800 points ahead of the opening, amid fears of a steeper slowdown in economic recovery. On the other hand, US Treasury yields plunged with that on the 10-year note hitting 1.50% after flirting with 1.70% mid-week.

Uncertainty related to central banks’ inaction and how the pandemic will continue affecting economies are likely to keep markets in risk-off mode next week, as both are likely to take their toll on economic progress for years to come.

The first week of December will bring updates on European inflation, as the EU will publish the preliminary estimate of November inflation figures with the Core Consumer Price Index foreseen at 1.9% YoY from 2% in the previous month. Germany will report October Retail Sales, while Markit will release the final readings of its November PMIs for the Union.

In the US, the focus will be on the official November ISM PMIs and employment figures, as the country will publish the November Nonfarm Payroll report on Friday. The US added 531K new jobs in October, and a similar figure should hint at more action from the Federal Reserve.

The EUR/USD pair has trimmed its weekly losses, trading just ahead of the 1.1300 level. The weekly chart shows that the pair has completed a double top figure, falling roughly 550 pips after breaking the neckline at 1.1703. The ongoing pullback could continue up to the latter, should the pair recover above the 1.1470 price zone.

At this point, the weekly chart indicates that the pair may well resume its decline. It currently remains below the 23.6% retracement of the October/November slump at 1.1305. At the same time, EUR/USD is developing below all of its moving averages, with the 20 SMA accelerating south and poised to cross below the longer ones. Technical indicators have bounced just modestly from oversold readings without anticipating further recoveries ahead.

In the daily chart, a firmly bearish 20 SMA stands at around 1.1420, a possible bullish target for the upcoming days, en route to the mentioned 1.1470, a solid long-term static resistance level. Technical indicators are correcting oversold conditions but are still far below their midlines, falling short of confirming an interim bottom.

The immediate support level is the 1.1200 figure, followed by the 1.1160 price zone, where the pair bottomed in June 2020. A break below the latter should open the door for a test of the 1.1000 psychological threshold. 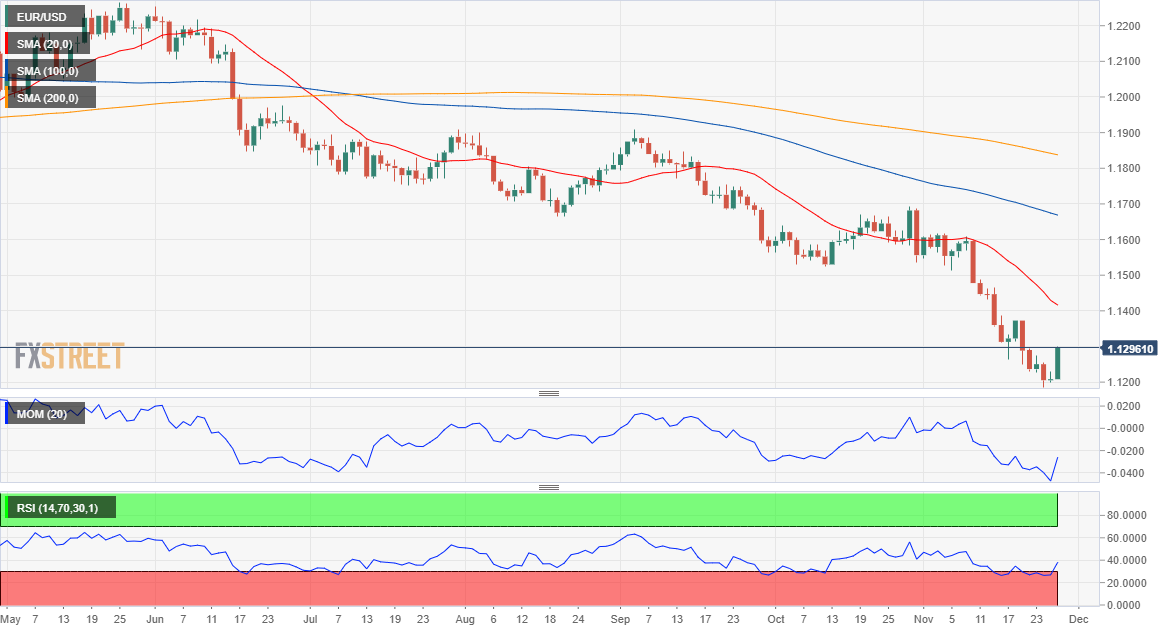 the FXStreet Forecast Poll suggest that EUR/USD could edge lower in the near-term, as 55% of the polled experts are betting for lower targets. However, bulls take over of the monthly view, as over 80% of participants look for higher highs, with the pair seen on average at 1.1458. Bulls retain control in the quarterly perspective, with the pair seen holding above the 1.1400 threshold.

The Overview chart shows that the shorter moving average has partially lost its bearish strength, but still heads lower as most targets accumulate below the current level. The same chart shows that as time goes by, the accumulation of possible targets moves higher, with chances of recovery up to the 1.17/1.18 region. Nevertheless, the longer moving averages maintain their bearish slopes.