The EUR/USD pair remained confined to a tight range for a fourth consecutive week, and not even Central Banks' announcements were enough to wake it out of its lethargy. The pair recovered the ground lost in the previous week, but monthly basis, both August and September candles present dojis. And the previous two months also show candles with small bodies, with volatility shrinking quickly since last June.  And is not just summer doldrums. It has more to do with slow economic growth, depressed inflation, and the inability of policy makers to combat them, repeating to excess the same unfortunate measures that already failed years ago.

Hopes that the US Federal Reserve would break the circle were diluted during the September FOMC's meeting, as the American Central Bank signaled that they are in no rush to raise rates, despite leaving doors open for a December hike. But doors have been opened for over two years already, and at this point, unless it sees some action, the market won't be able to set a strong directional trend.

Good news is that intraday traders can't go wrong with an eternally well-limited range, and that the FX board of plenty of more entertained crosses, with Pound's weakness and Yen's strength outstanding. Even the Canadian dollar, and its correlation with oil have become far more interesting that the EUR/USD pair these days. 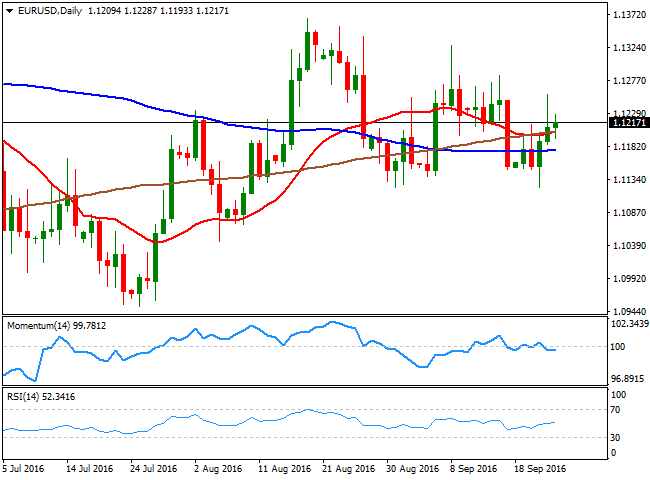 Anyway, not all hopes are lost: one day the pair will come back to life, and I promise, it will be huge: as tighter the range, as stronger the move once it´s finally broken. The problem is we don't know when it will happen. Hopefully, we will be still alive then.

In the meantime, and from a technical point of view, the pair is closing the week around the 1.1200 figure, with a modest positive tone in its daily chart, as the price is above its  moving averages that anyway  confined to a tight range, lacking directional strength. The momentum indicator in the mentioned time frame stands flat in neutral territory, but the RSI indicator aims higher around 52. As for the weekly chart, a neutral stance prevails, with the price stuck around the 20 and 100 SMAs, and technical  indicators heading nowhere around their mid-lines.

The levels to watch these upcoming days are 1.1160, a comfort zone, followed by 1.1120, the lows for the last couple of weeks. Below this last, a downward extension can see 1.1000/40 next week, should the dollar find a reason to run.

The immediate resistance on the other hand is the 1.1245 region, followed by 1.1290. Beyond this last the rally can extend up to 1.1366, August high, where strong selling interest will likely resume.