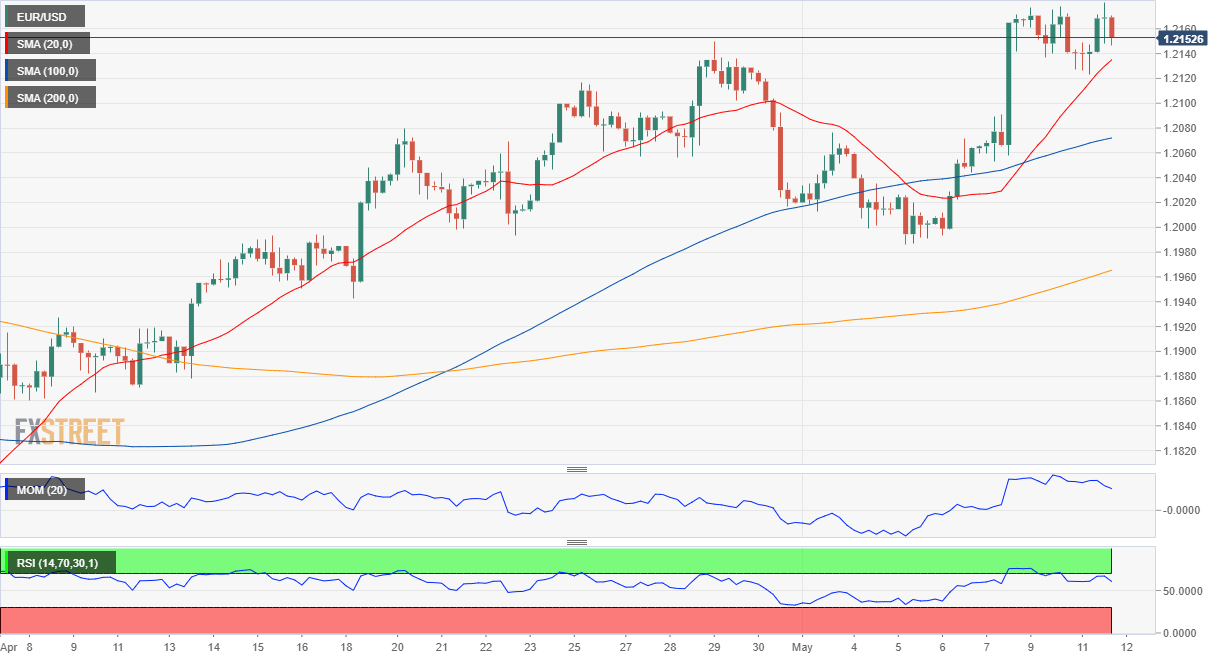 The dollar extended its decline on Tuesday after a failed attempt to recover some ground. The EUR/USD pair peaked at 1.2181, holding nearby as the day came to an end. Inflation concerns temporarily boosted the greenback following a sharp increase in the Chinese Producer Price Index as a result of resurgent commodities prices. Risk aversion surged ahead of Wall Street’s opening, leading to sharp losses in equities, but was not enough to help the greenback.

The shared currency found support in encouraging local data, as the German ZEW Survey showed that Economic Sentiment improved by more than anticipated in May. In the country, the index resulted at -40.1, while for the whole Union, it hit 84. Also, the German Wholesale  Price Index was up 7.2% YoY in April, much better than the previous 4.4%. The US macroeconomic calendar only included the NFIB Business Optimism Index, which improved from 98.2 to 99.8 in April.

This Wednesday, the focus will be on US inflation figures. The April Consumer Price Index is foreseen jumping from 2.6% to 3.6% YoY, while the core reading is expected at 2.3%. The forecasts are far above the US Federal Reserve target, and in normal times would mean monetary policy tightening. Fed’s officials have warned that such a jump in inflation not only is expected, but it likely be temporal. There won’t be a change in rates despite the number, although it could spur some wild market’s reactions.

The EUR/USD pair trades in the 1.2150 price zone, lacking bullish strength but with the risk skewed to the upside. The 4-hour chart shows that technical indicators retreated sharply within positive levels, with the Momentum nearing its 100 line. At the same time, the pair remains above all of its moving averages, with the 20 SMA maintaining its bullish slope above the longer ones, currently around 1.2130. The pair could enter in a corrective decline on a break below 1.2110, while a steeper advance could be expected on a break above 1.2190.